Letters From A Madrasa: When 3 Teen Girls Told Us Their Stories

By Hasan Akram in Education, Inspiration

By Ila Kazmi and Hasan Akram:

Getting access inside the girl’s madrasa (name kept undisclosed) is not less than an Augean task. This statement comes after our struggle to get access to an Islamic girl’s religious seminary (madrasa) in the national capital. Over the last few months we travelled to many places in Delhi to get access to a girls’ madrasa in a bid to understand and document their lives. We failed. Umpteen times. And more.

After having given up on the project, one fine morning, as luck would have it, I bumped into my college friend Mohd Zakariya whose father runs a girls’ madrasa in Shaheen Bagh, New Delhi. We thought we had everything covered but even there we were allowed to meet female students only after meeting certain stringent conditions. “Only a girl would be allowed inside madrasa for meeting students. You can only capture veiled faces,” explained Zakariya fearing opposition of other protagonist in the administration.

There were even more tough rules for the girls themselves. They were bound to live inside the boundaries of the madrasa only. They were not allowed to go out alone or without a person not from their family. At least one member of the family has to accompany them when they go out. They are also not allowed to have mobile phones. 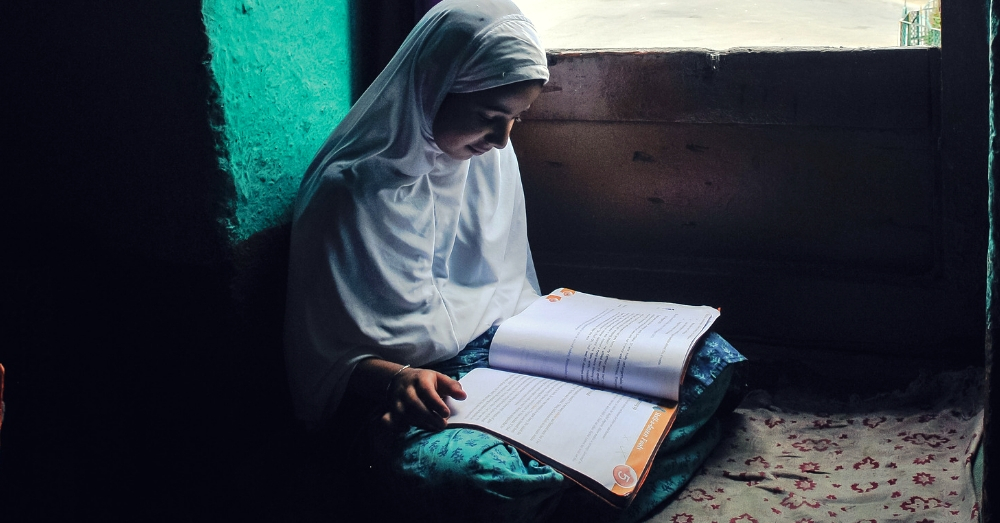 In madrasas, most of the subjects taught are related to Islamic theology and philosophy, apart from the Qura’an and sayings of Prophet (Hadith). Since not much modern, secular, or scientific education is taught, girls often find themselves devoid of career options at the end of their course. Moreover, mobility is also a big issue. If some girls want to pursue alternate modes of education, they find it very difficult to do so, even from open- or distance- learning modes. A few girls do make it to universities like Jamia Milia Islamia, Aligarh Muslim University, and Jawaharlal Nehru University after leaving the madrasa. But due to their lack of background knowledge they have limited options while applying to courses in the humanities and languages.

Even after we got access to the madrasa the students were reluctant to talk to us. For them, we were outsiders. So we thought of doing things another way. We gave them blank sheets and asked them to write whatever they wished to share with us. And then we got stories. The stories that smelled of cravings. Craving of a better future. Craving of freedom. Craving of life.

Let’s read some of those letters which ooze innocence and ambitions.

I am Hina Malik. I am ambitious and hard working. My hobbies are reading novels, travelling, and sleeping. I don’t like people who are not happy. I want to be a lawyer and an Alima—an Islamic scholar. Freedom. What is freedom? They say it is about loitering and roaming around. According to me, freedom is to have choices to do whatever you want.

India got free long ago but I see many girls not being free even today.

Life is a very weird thing. They say we can do nothing. However, I spend my life according to my choices. I want nobody to stop me. Tell me one thing, will this life come again? Will it? God has given you just one opportunity to live. So, do whatever you want.

My life is very interesting. Many have come to stop me but I didn’t pay attention to them. If someone asks me “What do you like most?” I give them one single answer—that I like myself and my freedom. I can’t compromise my freedom. I love it.

I used to change one school to another in childhood. I changed school every month. I was not interested in studying. I used to go to school with dolls and other toys and play there. When I was 10 years old, I insisted to get enrolled in a madrasa. Because I thought it would have an easier curriculum than schools. Only Qura’an sharif would be taught there. My father, who is a policeman, tried to stop me going to a madrasa. But then he bowed down to my constant insistence.

Five years ago, I was enrolled in this madrasa along with four other girls from my neighbourhood. But all of them have left now. I am the only person among us living inside the madrasa, now. I was tired of changing schools and that’s why I settled in here. I will learn English after passing out from madrasa.

Also read: On The Inside: Life In A Girls’ Madrasa

My hobby is reading books, playing games and exercising. I want to be a teacher. I am from Delhi. I am the youngest of my five siblings. My oldest sister is a a chartered accountant. Another sister is preparing for the judiciary exam. One of my brothers is a businessman and the other one is a mechanical engineer.

I am doing the Alima course in this madrasa. I could not appear for my High School examination due to my admission in the madrasa.

I miss my home. Badly. I enjoy it very much when I am at home. There can be no feeling better than being home. That is something extraordinary.

I am excited. My eldest sister is about to get engaged. What a feeling it would be to attend the first marriage function in my family!

Ila Kazmi and Hasan Akram are doing masters in Convergent Journalism from AJK MCRC, Jamia Millia Islamia. They are working on a documentary based on the lives of female madrasa students.