How Using Menstrual Cups Helped Me Explore My Body Better

Menstrual cups are the new up-and-coming trend among environment-friendly menstrual products, and it’s easy for anyone who’ve used them to understand why. I started using menstrual cups about 6 years ago, when they weren’t exactly common, and it has been the best decision for my periods ever. However, I want to talk about the impact using menstrual cups has had on me, and some of my friends, beyond that on our periods.

Considering that even in schools, teachers tend to leave the chapter on reproductive systems up for self-study, it should come as a surprise to absolutely no one that people, in general, tend not to know much about how our bodies work, especially the reproductive parts of it. Women especially are actively encouraged to not explore their bodies, or even talk about it. We’re socialised extremely young to consider various body parts as “private” (read: not to be touched or talked about). 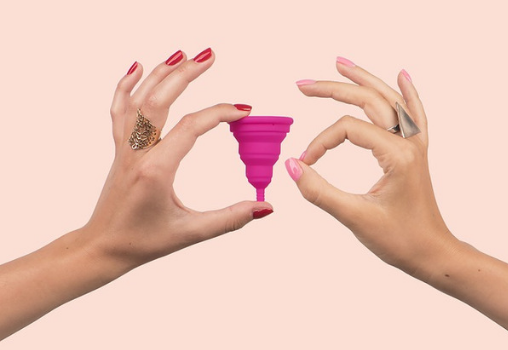 Though my teacher did teach us the reproductive system chapter, I was still one who didn’t really understand my own body and was somewhat hesitant to explore my groin and vaginal area. Without ever clearly remembering being told that touching myself in those parts was wrong, I was always keenly aware of the forbidden nature of it, and hence, when I did, it must be kept a secret. Add in puberty, and there’s a completely new aspect added to why our vaginas are secretive and some version of impure: periods.

Using pads and tampons, the grossness which I (and almost everyone else) have been socialised to feel about menstrual blood, would kind of get reinforced. From the black bags in which we were given our products, to the whispers in which we were expected to ask for menstrual products in public…it is all oriented around the idea that menstrual blood is not just impure, and hence makes the person impure, but also that it’s inherently shameful. That shame, that grossness could be retained with pads and tampons because I didn’t have to touch the blood, I could easily wrap up the products super quickly and avoid even looking at it.

Not only do we have to get comfortable with putting our fingers up our vaginas, but also feel around in there, feel where the cervix is. I only learnt what the cervix actually is, what it feels like, after I started using the cup. Because I was the only one I knew who was using the cup at the time, I didn’t have anyone to ask questions to, so I spent a lot of time watching videos online and reading what other people had written, and through them what the purpose of the cervix is, how to identify it and so much more.

The interesting thing about feeling inside your vagina to figure out where your cervix is, to see if the cup is fully opened, and all that… you may also get an idea of what some erogenous areas of your vagina are. Many women feel hornier and have higher sensation in their vaginas during periods. It’s a great time to feel around in there to see what gives you pleasure, what’s just so-so, and what you may just not like.

Also read: I Was Anxious About Using A Menstrual Cup, But Little Did I Know It Would Change My Life

Using the cup also helped me overcome that ‘socialised’ grossness about menstrual blood. While taking the cup out, it is quite inevitable that you’ll get some blood on your hand, and often, it won’t just be a little drop. It’s amazing how comfortable I have gotten with having blood on my hands and feeling absolutely no weirdness or grossness about it. For a country where there are many families where the women aren’t even allowed to enter their own kitchens or bedrooms during menstruation, having that blood on your hands is a big way of understanding how absolutely natural it is, and how convoluted it is that we’ve been made to feel so gross about our own body functions.

Using menstrual cups didn’t just make my periods so so much easier to deal with (which it totally did), or just make me lessen the damage I was doing to the environment (again, a big plus for menstrual cups)…it also helped me get to know my body better.