#CycloneFani: The Unquiet After The Storm

By Prakriti Jain in Environment, Society

Imagine the wind blowing at a speed of to 200 kmph, strong enough to uproot trees and rip through huts like a pack of cards. You are amidst this misery when a huge 13 feet monstrous wall of water gushes from shore gulping everything it could. Now we are in a better place to understand the plight of 1.2 million people who have been displaced from their houses, separated from friends and relatives and have no clue of what tomorrow holds in store for them. Fani is the worst cyclone hit in India in the last 2 decades. It locally translates to hood of the snake. The cyclone battered Bhubaneshwar, Puri and other coastal areas of Odisha on May 3.

After the disastrous cyclone in 1999, which caused massive destruction and loss of life, the Indian Meteorological Department tracked down the storm and issued numerous yellow warnings for most of the southeastern part of India when the cyclone started to intensify. But what couldn’t be controlled was the destruction of numerous capital resources causing a major shortage of the necessities of survival. The Odisha government on Wednesday submitted a preliminary report, which estimated damages worth Rs 11,942 crore.

While disaster affects both rich or poor, the effect on poor people is more. Displaced populations, health risks, destroyed infrastructure, food scarcity, and emotional aftershocks affect the poor way more than the rich. The recovery is easier for the rich as compared to the poor whose ‘Katcha makkans’ were the first things to be blown off. So far 1,89,095 houses have been damaged in Puri. Structures of temporary street vendors have also been completely damaged. 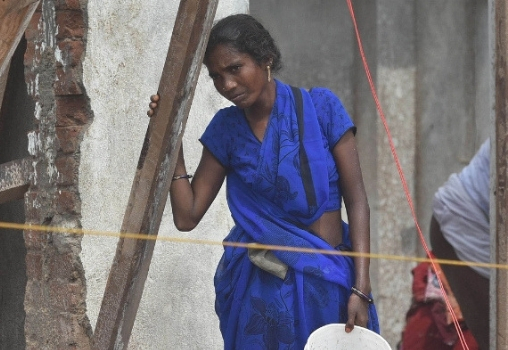 As on date, the Fani death toll has reached 64 with Puri being the worst hit. 160 people injured and admitted to hospital for treatment. Not just this, communications are greatly disrupted. There are uprooted trees on the road, destroyed infrastructure, and large-scale concrete mess. Among the first things to go off was electricity. As many as 75 towers have been uprooted by the high velocity winds in Puri district alone and a huge investment is required to make them operational.

With lakhs of electricity poles uprooted across the state, major sections of the population in the cyclone-ravaged Odisha continue to reel under the intense heat wave with limited electricity even 2 weeks after Cyclone Fani. Another section of society that faces extreme situations is women.

Apart from other problems, one major problem for women is sanitation. Smile Foundation volunteers who were working on the field found that with no access to clean water and sanitary pads, women are at a higher risk of infection in Odisha’s cyclone-affected communities. During its ongoing relief distribution and needs assessment visits, Smile Foundation’s Disaster Response Team heard this across villages. A group of women in Puri District said that they have been using dirty water for hygiene purposes. The only shop near the village of Hansapada that provided sanitary pads and soap collapsed during the cyclone. The other closest option is 7 kilometres away. A community toilet that the women used was also destroyed, forcing them to open areas in the dark at night or early before the sunrise.

Also read: Cyclone Fani: Its Origin And How Odisha Responded To It

According to government data, livestock casualties are over 34 lakhs and over one crore sixty-five lakh people were adversely affected by Cyclone Fani in the state. A story posted by Smile Foundation on the loss of livelihood talks about a family of 6 surviving on pensions and meagre income having everything wiped out in front of their eyes. Smile team helped them with necessities and helped them build their moral back. The Odisha government announced Rs.1600 crore packages for livelihood support for farmers, fishermen and others affected by Cyclone Fani. The government is providing about 50kgs of rice and about 2000-2500 rupees to everyone but there is a lot that is still needed to be done.

It’s evident that the cyclone has hit not just Odisha but the country very hard. The need of the hour is to build back better. The roads are blocked by uprooted trees and blown off roofs. Rehabilitation of the displaced would be an important step. The dispatched people need to resume their normal life but most would come back to broken shelters and destroyed livelihood, we need to support them to build back better.