India’s Religious Intolerance Is A Universally Identified Fact, And We Should Be Ashamed

The United States Commission on International Religious Freedom (USCIRF) recently released its annual report for 2019 on the state of religious freedom in countries across the world. The Commission is “an independent, bipartisan U.S. federal government commission created by the 1998 International Religious Freedom Act (IRFA) that monitors the universal right to freedom of religion or belief abroad.” It “uses international standards to monitor religious freedom violations globally, and makes policy recommendations to the President, the Secretary of State, and Congress.” It defines religious freedom as “an expansive right that includes the freedoms of thought, conscience, expression, association, and assembly.” 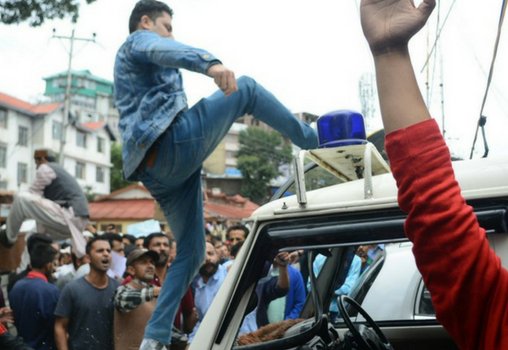 There are some other countries that are monitored too but don’t come under either category. Additionally, there are non-state entities like ISIS which are also seen as “entities of particular concern”.

The 2019 report of the USCIRF puts India in Tier 2 category, observing that “religious freedom has come under attack in recent years with the growth of exclusionary extremist narratives—including, at times, the government’s allowance and encouragement of mob violence against religious minorities—that have facilitated an egregious and ongoing campaign of violence, intimidation, and harassment against non-Hindu and lower-caste Hindu minorities.” It laments that “the Indian government repeatedly has denied USCIRF access to India.”

Interestingly, the International Religious Freedom Act, which created the USCIRF, has been used once to ban India’s current Prime Minister Narendra Modi. Of course, once he became Prime Minister, the ban was lifted because India is strategically important to the US, and it’s impossible to work with India if you ban its directly elected Prime Minister. Exactly why India has been unwilling to work with USCIRF, though, is open to conjecture.

Also, the IRFA provides the US Secretary of State (essentially the US President) with a “range of policy options” which can include “sanctions” on CPCs, but which are “not automatically imposed” upon USCIRF’s recommendation. This leaves a lot of room for discretion in executive action, and no CPC has faced any sanction based on these recommendations, apart from Eritrea in the past.

Saudi Arabia and China, two of the worst and most consistent violators of religious freedom, and indeed human rights have not come under sanctions as CPCs. In terms of realpolitik, it makes sense for the US not to irk one of its biggest defence purchasers and its most important ally in the Arab world, or its most important trade partner (which it has engaged in petulant trade wars with very recently).

One is left to wonder whether the USCIRF is even relevant to US foreign policy. If not, what’s the purpose of it continuing as an advisory body? US foreign policy has been interventionist and neo-imperialist since the end of WWII, and it has involved itself in numerous bloody wars, starting from the still officially ongoing Korean War, to the ongoing troubles in Afghanistan, to its interventions in Iraq, to its blatant support for the continued pummeling of Yemenis by the Saudi bloc, and each such adventure has been a disaster both in the short-term and long-term.

If nothing else, surely its consistent support to Zionists in US and Israel over the decades – exhibited most brazenly in its withdrawal from UNESCO recently due to its apparent “anti-Israel bias” – despite evidence that the latter has continued to violate the rights of Palestinians, demonstrates that the US is anything but a neutral and objective arbiter of international morality and legality. And it’s certainly not a competent or committed enforcer of universal human rights.

So why has the language in the reports of  USCIRF over the years suggested that it represented a party that was one? What moral authority does the State Department of a country that imposed a travel ban on citizens of Muslim-majority countries (none of whom have ever threatened American lives or property) have to lecture the world about the plight of Muslims, say, in India under Hindutva or in totalitarian China? What, indeed, to think of a Secretary of State who, not too long ago, was himself making Islamophobic comments to his fan base? Do hypocrisies even register in this age of ‘alternative facts‘?

The strange thing about all this is that the USCIRF is in and of itself a noble project. With the right kind of diplomatic tools and moral compass in the White House, its rigorously compiled and factually robust reports on the state of religious freedom in countries could provide direction to a foreign policy committed to achieving international religious justice. But the country must first ensure that it practices what it seeks to preach.

Since 9/11, life has become more difficult for Muslim Americans. They have been put under surveillance and tortured under the notorious PATRIOT Act, and have been subjected to violence and assault by fellow Americans and which peaked after the election of the current President and also to discrimination and microaggressions, despite being proud Americans.

Recently, an Iraq War veteran shouted “Thank you, Jesus” after driving his car over the members of a (presumably Hindu) Indian-American family thinking they were Muslims, leading to three people, including one child, being critically injured. This is probably the result of years of racial profiling of Muslims under the assumption that they were guilty until proven innocent. The loud racist, Islamophobic rhetoric emanating from the mouth and tweets of the current occupant of the White House and those in his administration must cease immediately. If American institutions have any credibility, Congress for one must be able to put fetters on hate speech that ends up hurting real people. Until and unless American society reflects the ideals of racial and religious harmony it espouses in its international postures, honest and potentially fruitful endeavours like the USCIRF will only end up seeming like a case of throwing stones from a glasshouse.

Also read: In The Hindutva Hate Universe, All Things Muslim Are Pakistan

Nevertheless, USCIRF’s observations, at least on India, are not to be brushed aside. In fact, it only adds to a long list of complaints about the conduct of the Indian state against its religious minorities, especially in the last half-decade or so. The government has been trying to enforce its own “Muslim ban” through the deliberately divisive Citizenship Amendment Bill, which seeks to fast-track citizenship to all religious minorities from neighbouring countries except Muslims of any denomination.

The shameful conduct of the government when the Rohingya refugees were faced with existential crisis under what the UN Office of the High Commissioner for Human Rights (OHCHR) has described as “ethnic cleansing” by the Myanmar military has given India a bad name internationally. India has grown more visibly supportive of Israel since the latter is now an important arms exporter, and consequently its support for the Palestinian cause has sounded more feeble and less sincere. So even if we disregarded USCIRF’s report, India has not covered itself in glory with its international stance towards persecuted Muslims. But then, it is not possible to ignore the USCIRF report, even though it only, scarily, confirms to many of us what we already know.