On The First Day Of Pride Month, We Became Mrs And Mrs

In 2018, I left my LGBTQ+ network behind in London when I moved to India for work. Before I started work in Jodhpur, I had spent a weekend in Mumbai, where I decided to try and make some new friends. I had no idea how to become part of the queer scene here so I randomly downloaded Tinder. I wondered if I could make LGBTQ+ friends that way. Eventually I matched with a woman who offered to add me to her WhatsApp group of lesbian and bisexual friends. Being on it made me feel less lonely.

A few days later, this beautiful woman was added to the group.

My first message was super cheesy. I asked her if she wanted to hang out in Mumbai sometime. “You seem really interesting,” I told her. Thankfully she responded! Over the next month we started video-calling each other. When we finally men, one date turned into spending a whole week together. Something about being with K just felt so right!

Over the next few months we continued to grow closer. We travelled some of India together, then Nepal, and realised there was much more to this then just dating. Thankfully K felt the same.

As it turned out, K had already been applying to universities in the UK. In August 2018, she moved to the UK. And then we got enGAYged in December 2018.

How Our Families Came Together

K came out to her mum in January 2019. Her mum and I had met in Mumbai a few times, and got on well together. The only thing she asked was that I look after her daughter.

It was only a few days before the wedding that K’s parents and mine actually met for the first time over dinner. We were super nervous, but things turned out great! My dad loves cooking Indian food and K’s mum has taught him several recipes. Both our mums were nurses before they retired, so they have a lot in common. They hang out with each other so much that K and I have even started referring to our mums as ‘besties’. 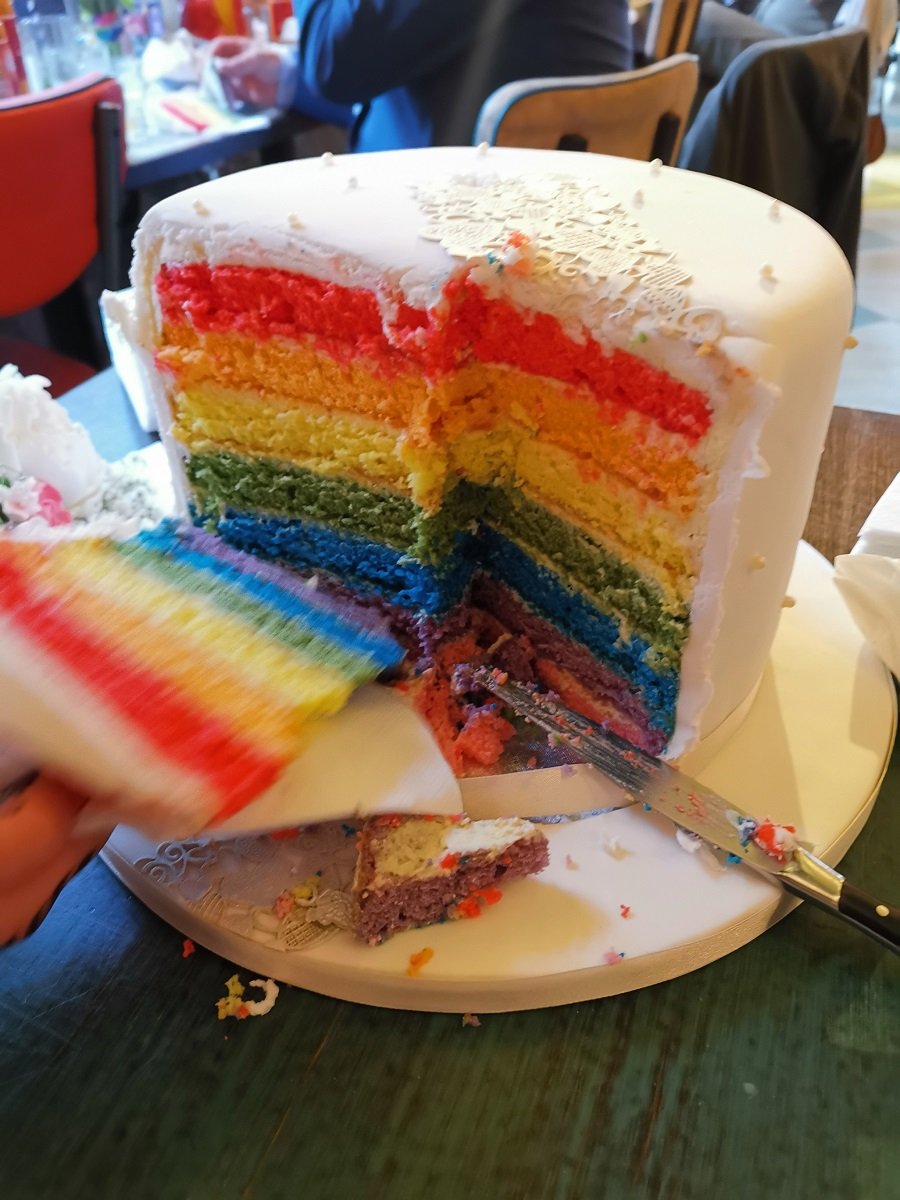 The Day Of The Wedding

We chose June 1, the first day of International Pride Month, as the date for our wedding because we wanted to recognise how far we have come in terms of rights for the LGBTQ+ community.

It was a really small, non-religious ceremony, in a beautiful outdoor location, with only our closest family and friends. We also chose to wear sarees instead of white wedding dresses, because we wanted nothing to do with those patriarchal symbols of purity!

We wrote our own vows with little inside jokes—I promised never to make K share snacks and she promised to help me to stop panic buying jars of pickle and mayonnaise in case we run out. The wedding cake was made with the Pride flag colours to celebrate the LGBTQ+ community.

Having K’s mum and both my parents there to walk us down the aisle meant everything to us — it was when we realised that we had all become one family.

Once the ceremony had finished and they introduced us as Mrs and Mrs, I actually yelled “Wow I just got married!”

I grew up under Section 28 in the UK, which meant that schools were not allowed to “promote homosexuality or promote the teaching of the acceptability of homosexuality.” Because of it, as a kid, I was not able to talk about being LGBTQ+ in my school and so I genuinely believed I would not find a loving partner.

Same-sex marriage also only became legal in the UK in 2014. So getting married wasn’t something that I ever thought possible in my life time. It was the same for K growing up in India, under Section 377. Even today, same-sex marriage is still not recognised in India, which will give us some interesting challenges, legally, around visas if we ever were to try and live in India together. So for us getting married in itself is a protest statement. It’s us saying that we are here as two wives refusing to accept that we shouldn’t have the same rights that heterosexual couples do. 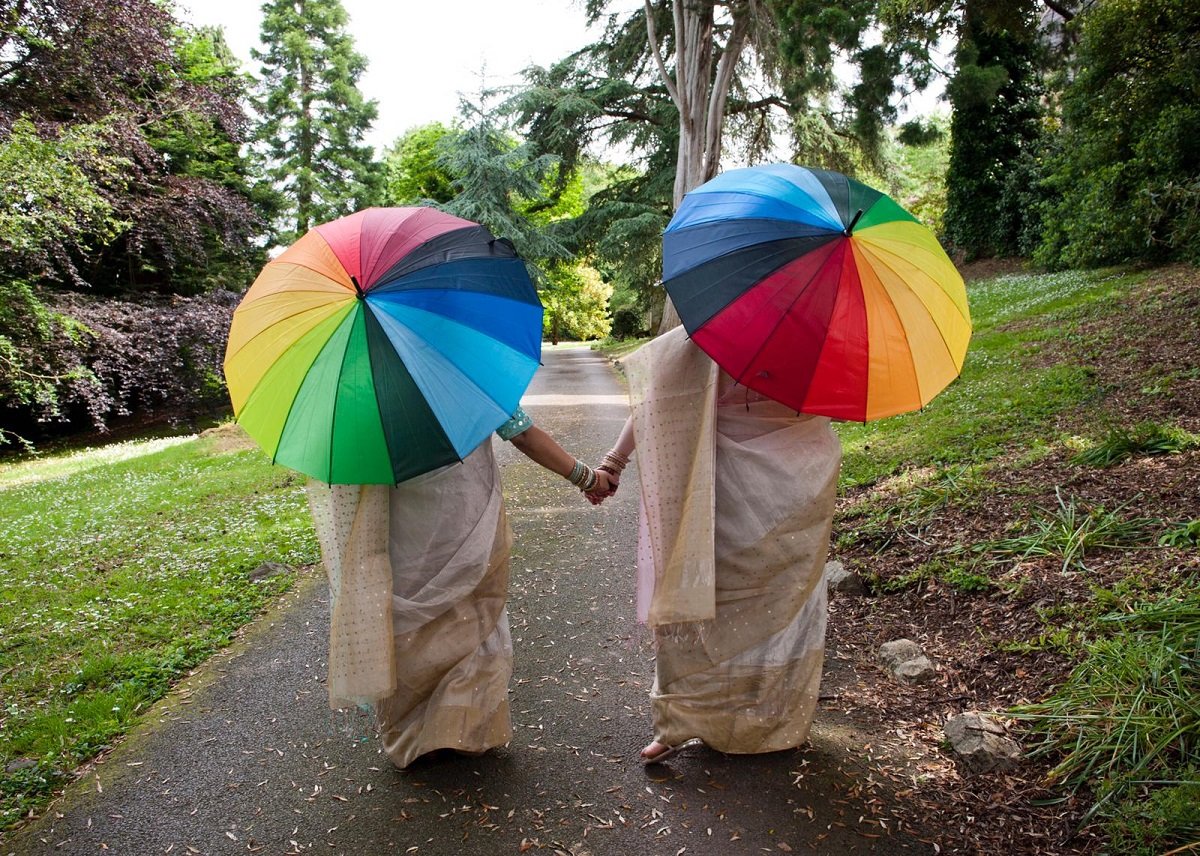 Also read: Marriage Equality Is Still A Pipe Dream For Most LGBTQ Indians

Being legally married in the UK means that we are now able to apply for a spouse visa which will hopefully enable K to stay long term in the UK after her studies have finished. This is the next step in our journey and we are really hoping that the application goes smoothly and we can settle here long term. Without the opportunity to marry in the UK we would have had to move to another country to live together and continue our relationship. So marriage equality means everything to us in terms of continuing to be together.

From the day that we first met, I knew that K was the person I wanted to spend my life with. We keep waking up, looking at each other and going “Wow, we got married!”, which is the best feeling either of us have ever had!

All images courtesy of the author. In the spirit of Pride and celebrating queerness, the author and her wife document their journey together at @letztravelgirls on Instagram.