“One Day at a Time” is the name of a Netflix series which follows the lives of  a Cuban-American family. One of the principal characters is Penelope Alvarez, who had served the United States Army in Afghanistan as a nurse. She is separated from her husband Victor who was working in Afghanistan as a private investigator. Penelope’s family comprises her mother Lydia, her daughter Elena, and her son Alex. The show also has other colourful characters like their friendly landlord Schneider, and Penelope’s boss, Dr Leslie Berkowitz who happens to be Penelope’s boss at the care centre where she works.

The series seeks to send out a number of important messages about depression, racism, women’s rights, LGBTQ+ rights, and much more. One of the main characters, Elena, even brings up the term “Latinx” – a gender neutral term used instead of Latino or Latina. And it’s Elena who  makes this series so different from others. Why? Because it is uncommon for  popular media to portray a queer Cuban girl as an important character.

Elena is unique. She is socially, politically, and environmentally aware and stands up for what she believes in. In the very first episode we see her mother and grandmother trying to convince her to have a “quinces,” a celebration held for a girl when she turns into a young woman, usually at the age of 15. She thinks that a quinces is a misogynistic cultural ritual. Elena is not easily convinced and asks Penelope  and Lydia to give her reasons why she must participate in the celebration. Her mother says she wants to show her larger family how well she was doing as a single mom. Elena finally agrees with Penelope, because she believes it is important for her mother to feel that sense of empowerment.

At school, Elena once had garbage thrown at her face while she was explaining the importance of waste segregation to her fellow students. When she told her grandmother about the incident, Lydia said people would listen to her if she wore make-up and looked “pretty.” Elena was not at all comfortable with the suggestion. Although she went to school with her face fully made-up, she removed the make-up. Her grandmother accepted Elena’s decision. This incident in the serial highlighted to me the importance of believing in yourself. This is one of the many lessons I learnt from the strength of character displayed by Elena Alvarez and this is why I look up to her a lot.

Elena informs Penelope that she is a lesbian soon after she finds out that her daughter has been watching porn on the home laptop. At one level, Penelope is happy that her daughter has confided in her and informed her about her decision to “come out.” At the same time, she is not completely comfortable with her daughter’s sexual orientation. Penelope makes the effort to reach out to Schneider to get things off her chest. She also confides in a friend who identifies as a lesbian, over some drinks at a gay bar. While there, she meets a man who helpfully explains to her that it was not surprising that Penelope was uncomfortable in accepting her daughter’s sexual orientation even if Elena may have been waiting for months or even years to “come out” before her. Adam tells Penelope that she should respect Elena and support her. All that Penelope needed to do was wait a while to process the information, he added. Adam reveals that his own brother is gay and he had undergone a similar experience.

Also read: On The First Day Of Pride Month, We Became Mrs And Mrs

During this period, Elena also comes out to her grandmother Lydia, a strong believer in God.  “God did make us in his image,” says Lydia, “and God doesn’t make mistakes.” At the same time, Lydia also quotes the Pope, saying: “Who am I to judge?”

Despite her initial apprehensions, she accepts Elena for what she was. This decision helps Penelope as well.

But the big showdown happened after Elena’s father Victor comes home from Afghanistan on the occasion of her quinces. When Elena comes out to him, he reacts very badly, leaving in a fit of anger.

Later, we see Victor confront Penelope, shocked that she had accepted their daughter’s sexual orientation. With some difficulty Penelope convinced Victor  to come for Elena’s quinces (more on that later!)

To mark the occasion of the quinces, Lydia makes Elena a beautiful suit instead of a dress, which is gender non-conforming, yet another expression of love and acceptance for her granddaughter. Victor has an indication that Elena has come out to everyone at the quinces, whereas he did not want her to tell too many people about this “passing phase.” In anger, Victor leaves the party right before the awaited father-daughter dance. And then comes what I think is the most powerful scene in the series. Penelope steps in to dance with Elena. 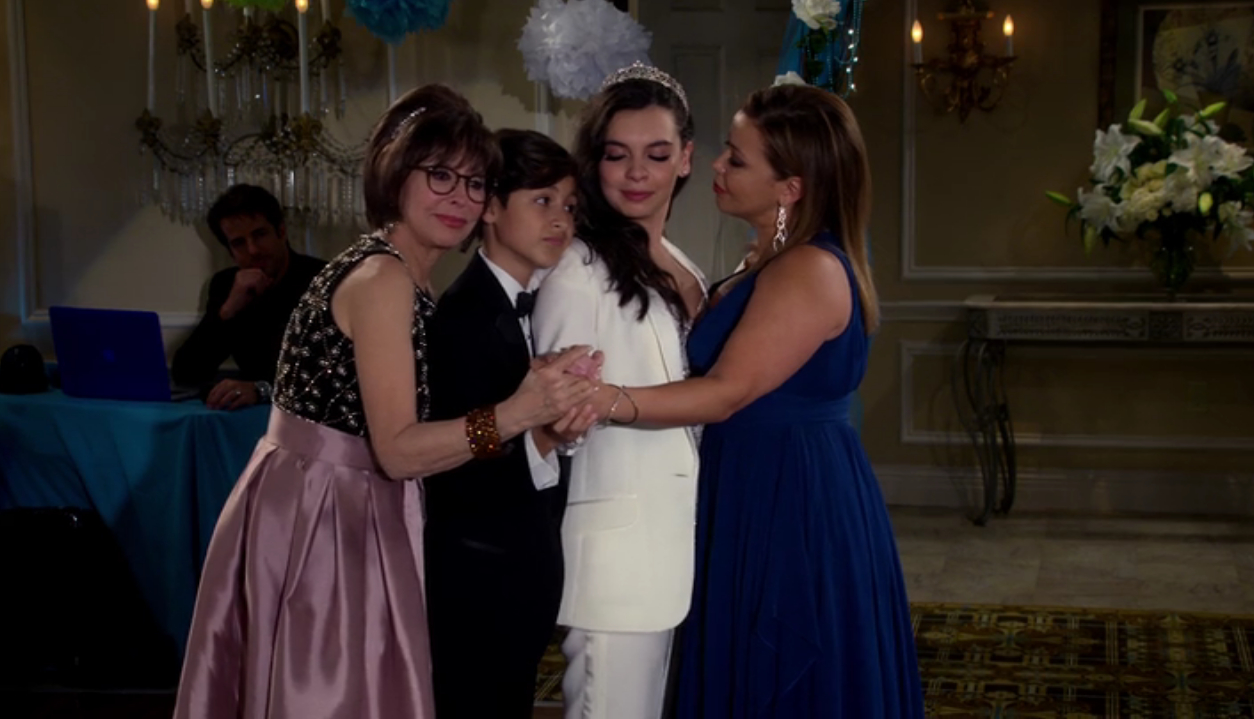 Soon Alex, Lydia, Schneider and Dr Berkowitz join the dance and surround Elena in a way that others cannot see that she has tears in her eyes. For Elena, as well as Penelope, it was a highly emotional moment. Penelope successfully proved to her larger family that she was doing great without Victor.

The second season of “One Day At A Time” starts off with Elena going for a march with other young people. She is depicted as an aware and strong person who participates in protest marches. In one such march, she protested against the producers of a video game who had promised that there would be characters of three genders but only had two. Penelope and Lydia are also introduced to gender non-conforming pronouns through Elena’s advocacy group.

At this stage in the series, we see Elena having her first crush on a girl. Elena wonders if the girl she likes is gay. Her heart is, however, broken when she learns that the girl she likes already had a partner. That’s when she begins talking to Syd, who approaches her, wanting  to share a cookie with her. After some initial confusion, Elena realises that Syd is interested in her. She exclaims: “Gay, me gay!” 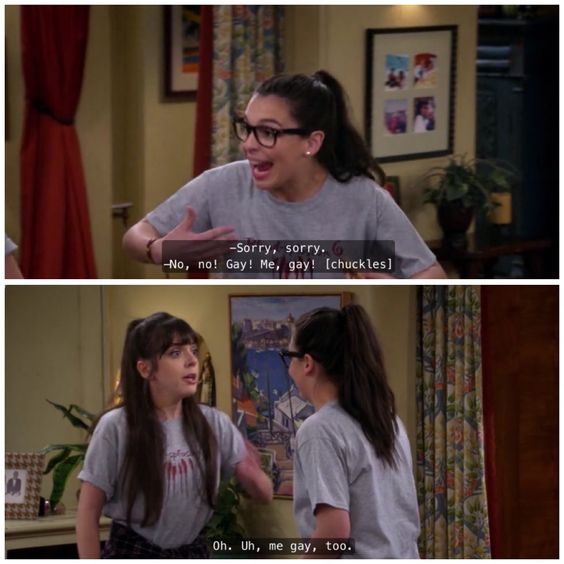 Another incident comes up in the third season of the series. On one occasion, when Elena and Syd are out in public, two men start harassing them. They were holding hands when the men taunted them, saying: “Just kiss. Why don’t you kiss?” The men disappear into a crowd. But Elena does not tell Penelope and Lydia about this incident till much later. This makes Penelope sad but she also understands why Elena and Syd had been spending more time at home instead of outdoors. I was moved by this emotional scene and agreed with the protagonists in the serial that it was very unfair that they could go out together like other couples. This was similar to the incident in London where two lesbians were beaten up by four men in a bus, because they refused to kiss. They were punched and robbed. The police described it as a “homophobic assault”.

Also read: How ‘Kapoor And Sons’ Smashes The Clichés Around Homosexuality In Mainstream Bollywood

Over the course of the show, Elena and Syd have discussed how they can use non-binary language. Elena agrees to be called Syd’s “girlfriend”, but it cannot be the other way around,  because Syd doesn’t identify as either male or female. They finally decide that Syd will be called Elena’s “significant other.” On a lighter tone, Schneider, a character who really adds humour to the series, recommends that Syd should be called Elena’s “Syd-nificant other”.

The serial not only highlights the hardships faced by members of the LGBTQ+ community, it seeks to raise awareness about how to (and how not to) behave with such individuals in a sensitive manner. I believe those who watch “One Day at a Time” will learn to respect individual identities and love people for what they are – and not what others want them to be.

“One Day At A Time” also deals with how family support became very important for Elena. Through the episodes we are shown how Elena develops as an individual and her relationships with her family members and the rest of the world. Her family gets to appreciate that Elena’s sexuality is only one part of her personality, that it is important for them to realise that she is strong, confident and excels and what she does, that she stands by her views and convictions even when these are different from what others believe in.

I admire those who are like Elena, an aware individual who knows exactly what she’s doing