Last Year Women Labour Force Of Kerala Won Their ‘Right To Sit’. What A Win!??

Last year, just before the devastating floods in Kerala, there was a news in the mainstream media which might not have caught attention of many. The news was about how women labour force of Kerala, serving at such retail stores, won their ‘right to sit’ during working hours. What a paradox for a state which is, otherwise, considered progressive in many ways. 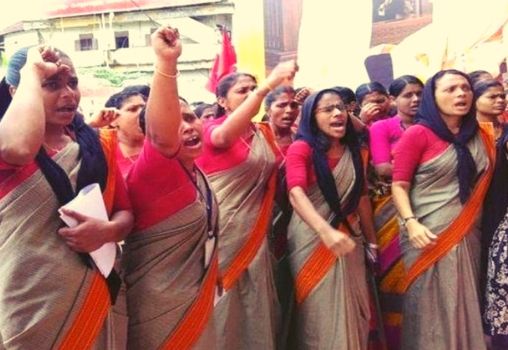 To their respite, after 8 years of struggle, Kerala government agreed to amend the labour laws to include a clause ‘obliging employers to let women sit’. Indeed, great on part of the government that it took notice. Question here is a bit different–do we actually need a law to respect fellow human beings and their biological necessities? Isn’t empathy enough to do so?

Why do we forget that India is governed by a Constitution which grants right to life with dignity and right to freedom against exploitation!? When these retail companies and their management treat customers as ‘kings’, it is such an irony that they forget to treat their shop floor staff as human beings who, too, have certain biological needs. A point, worthy enough to be noted is also that Kerala has a Labour Policy (2018) which takes into consideration economic growth of different sectors, conducive employer-employee relations and promises welfare of employees employed in different sectors. This so-called amendment will be, probably, qualifying the employee-employer relationship in the labour policy. If it continues like this, many more such rights need to be specifically mentioned in the policy to create an actually conducive working environment.

Amendments to laws are not solutions, such problems have to be dealt in a holistic manner. For Kerala, it is the need of time as the state is witnessing growth of powerful business groups from within and outside the state, especially retail. It is booming and blooming and everybody is reaping the privileges but the shop floor staff. The give and take relationship between political parties and corporate houses need not be written explicitly. They do enjoy each other’s privileges. The brand ambassadors also make the most of their stardom and strike a golden deal with almost zero social responsibility. The masses, the common Malayalees, also enjoy the red carpet shopping experience offered to them as part of brand promotion strategies.

Because the state needs migrant workers for almost every work and the wages offered are also better than other states, the state has a considerable number of migrant workers. Reportedly, they work in exploitative situations and reside in deplorable living conditions. There had been reports of unregulated increase in the number of parallel colleges in the state, which employs teachers but do not pay them enough. Similar struggle is being waged by nurses working in large private hospitals. Exploitation of the floor staff of the ‘supermarkets’ and ‘hypermarkets’ also deserves a mention here. This is how the semi-urban ‘new generation’ Kerala labour market looks like.

All the workforce mentioned above could be grouped as informal workers who have human and constitutional rights, which should be respected. Policy gaps do exist and policies do evolve. Larger issue is around doing businesses in a responsible manner obeying the laws of land and respecting human rights.

Government needs to, hence, analyse the deep-rooted issues of employment in the primary, secondary, and tertiary sector and respond effectively through a comprehensive approach. While newer policies are being drafted and older ones are being amended, the least expected is strict, stringent and timely enforcement of extant laws rather than multiple Band-Aid treatments without proper diagnoses and prescriptions.

Kerala is a state which has a legacy of enviable labour movements. After all those victories, it is sad that its women had to demand their right to sit through this kind of a struggle. But then if ‘right to sit’ was an eight-year long battle how many more decades will be needed to boast on the victories against the capitalist businesses in the state? As most of the floor staff were female employees, in this issue, this amendment is a victory for the women. But it is still not a reality as women do not dare to sit on the seats provided to them. They are still afraid as they are not sure whether they could access their rights. The inspections by government officials happens not quite often and therefore many a time shop owners leave the women to exploitative treatment.

A progressive state doesn’t just have to showcase its outstanding performance on various development indicators, it also has to live up to the dreams of those who make it possible.