Budget 2019: The Misleading Goal Of A 5 Trillion Dollar Economy

On 15 June, at the governing council meeting of NITI Aayog, PM Modi had announced the goal of making India $5 trillion economy by 2024. Expectedly, the economic survey and the budget announced on July 5, 2019 focused primarily on outlining how this ambitious goal can be made into a reality. A host of economists and business analysts have been extensively discussing and debating if this goal is even achievable and have suggested ways best to achieve this target.

However, in this blind pursuit of increasing total production and total consumption, we have forgotten GDP inventor Simon Kuznet’s warning against misconstruing GDP as a welfare measure. We forget that GDP is just one number that cannot ever encompass everything an economy means. A $5 trillion economy cannot be expected to end all our economic woes unless it is accompanied by job growth, equality of opportunity and better health and education. It is important not only to worry about achieving this short-sighted goal but also worry about how we would want the 5$ trillion dollar economy to look like. Do we want a job producing and more equitable economy or we want growth at the hands of only a few richest?

First and foremost, it must be pointed out that the goal of a $5 trillion economy is particularly problematic because of it being stated in nominal US $ terms. This number does not reflect the true economic growth. For one, the nominal value also includes the effect of inflation on total GDP, so if prices increase at a high rate in the next 5 years then nominal GDP may reach 5 $ trillion but real GDP will still remain well below this number.

Second, it also ignores the effect of the fluctuating exchange rate. Consider the comparison of real GDP in rupee terms (by MOSPI) and real GDP in dollar terms (by World Economic Outlook). While the real GDP growth in rupees has been stable at around 5.7 – 6%, the real GDP in dollar terms has been erratic, going from as high as 15.83% in 2017 to as low as 2.43% in 2017. The reason for this is the fluctuations in the exchange market which distort the actual picture of the economy as it stands. To reach the target, double of real per capita GDP in rupees will take us 10-11 years as opposed to the predicted target of 5 years to double our nominal GDP in US dollars. 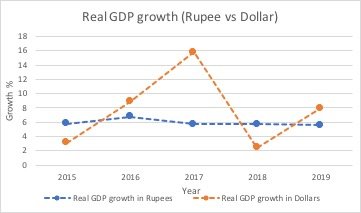 Even if we keep aside this fallacy, this budget has simply failed to articulate its vision for what components it sees in its ambitious $5 trillion economy. The economy must be visualized in terms of how it addresses the current economic problems and leads to the overall well-being of the society. If only total production in the economy were a proxy for well-being, then India should be the happiest it has ever been with 2.61$ trillion. However, according to World Happiness Report 2019 India is ranked at a shameful 140.

India at the moment is going through a serious job crisis, agrarian distress is at its worst, and private investment, which Economic Survey suggested shall be the most important contributor to India’s growth, is slowing down. In such a situation it is not only important to have ambitious goal targets, but it’s equally important to make them in line with solving the problems of the present.

As Economic Survey stated, India has a massive demographic dividend at the moment, and harnessing it for this growth target will be extremely important. The importance of education and health in this regard is paramount. The education budget saw an increase of 14.3% in higher education and 12.8% in school education. This number however still remains far below the recommended minimum of 6% of the GDP by the Kothari committee.

More worrisome than the total budget on education was the fact that Finance Minister, Sitharaman devoted almost no time to outline its schemes and ideas for education barring a mention about National Research Foundation which forms the recommendation of draft National Education Policy (NEP). This points at the government’s continued lack of importance given to education in the budget. And the situation was even worse for the health sector with only a passing reference given to the “role of Ayushman Bharat” in creating a healthy society. It is unfortunate that at a time when over 100 children recently died in Muzaffarpur district in Bihar, and many more tragedies happen every day due to poor health facilities, health is still seemingly very low on this government’s list of priorities.

The link between productivity and growth, and, education and health is an established one, yet despite setting up such ambitious targets of growth, education and health sectors haven’t received the attention that they need. These important discussions unfortunately remain hidden under the garb of pursuing growth and development in terms of only GDP numbers.

Also read: Budget 2019: Education, Healthcare, Farmers Do Not Receive The Deserved Due

Finally, the budget’s lack of focus on fostering equality is another pertinent issue that goes ignored by masquerading growth and development as a single number. The most common error we make when equating development with GDP number is ignoring the fact of the distribution of resources. It is possible, and indeed most likely, that most of the growth in the next 5 years will come from only a few richest individuals in the country while incomes of the poor remain stagnant or grow at a very slow pace.

According to the Oxfam report, India’s richest 1% hold 73% of the total wealth in the country as of 2019, and this number has been on the rise; the previous year richest 1% held 58% of the total country’s wealth. Meanwhile, the poorest 50% of the country improved their incomes only by 1%. It is important to keep in mind these numbers, because a high GDP after 5 years may not entirely turn out in favour of the country’s well-being if it is not well-balanced. Therefore, the discussions around GDP growth must also include the components and vision for what is to be expected from these numbers which have evaded the public discourse around this 5$ trillion dollar goal so far.