“Marcela, it’s not too late to live another life. A life that is normal,” whispers Elisa.

“Be quite,” comes the reply. “A normal life for me is with you.”

Of all the exchanges in Netflix’s latest film “Elisa & Marcela”—based on the story of Spain’s first same-sex marriage—this one stands out the most.

Written and directed by Isabel Coixet, the story follows Elisa Sánchez Loriga and Marcela Graciela Ibeas, who meet in school, fall in love, and are then confronted by provincial Spain’s lesbophobic wrath. A century before Spain will legalise same-sex marriage (in 2005), both Elisa and Marcela are daunted by questions that queer couples even today keep asking themselves: Will people accept us? Will we be safe? Where will we go? 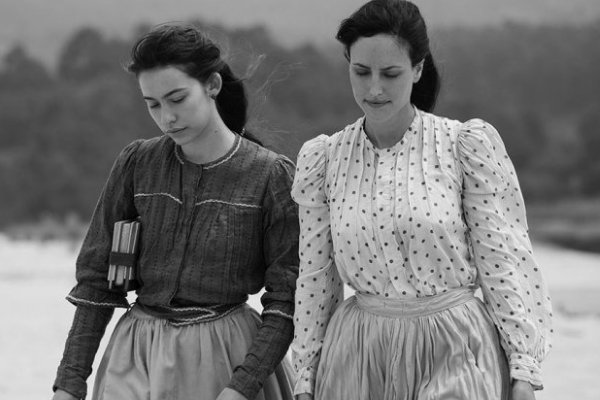 With its tragic black-and-white aesthetic, the film is likely to illicit one of two responses. First, empathy and (if we’re lucky) some introspection from the average cisgender/heterosexual viewer, being presented with a glimpse of the trauma and persecution that chases LGBTQ people in every country. Elisa and Marcela have stones thrown at them, and they even wind up in jail. There’s a reason these became crucial plot points. The Second response is the impatience for a more nuanced narrative of queer lives in olden-day Spain, something that moves away from the “sad gays” trope, of which even award-winning films like “Blue Is The Warmest Color” are guilty of.

Is “Elisa & Marcela” my ‘favourite gay movie of the year’? No. I have my complaints—for instance, overly stylised sex scenes, which filmmakers think are necessary for establishing two characters as Real Lesbians™. But if it is an attempt at sensitisation and empathy-building, then my guess is that it will succeed. After all, the story is made of all the things we’ve been brought up to like—true love, soulmates, fighting the odds. And guess what? Nobody dies! It’s setting the bar horribly low, but given that movies and TV have a penchant for killing off queer characters, the fact that both Elisa and Marcela survive till the end credits is—I can hardly believe I’m saying this—an achievement.

Also read: This Film Helped Me Look At Sex Work In A Whole New Way

The movie is pretty basic. But there’s merit in films like that too, when you’re easing audiences into the reality of queerness. At a time when India has decriminalised homosexuality, Taiwan has legalised same-sex marriage, and Japan might just legalise it too, the world is going to need more and more basic films that talk about sexuality and gender, with the explicit aim of normalising what the “wokest” of us know has always been normal.

Now, what about its exploration of gender? I wouldn’t go as far as saying it’s barely-there. But it will require some paying attention to. “Elisa & Marcela” is reminiscent of Glenn Close-starrer “Albert Nobbs”, also based on the true story of a male-presenting butler who was assigned female at birth, living in Victorian Dublin. Presenting male is also a theme in Coixet’s film. When Elisa decides to cut her hair and don men’s clothes (to guard against increasingly vicious homophobic attacks), the viewer’s getting a sort of crash course in what theorist Judith Butler called “gender performativity”. Gender is performed through a set of behaviours, attitudes, appearances, and so on. Just like Nobbs’ male persona brings in an income, Elisa’s male persona allows her to marry Marcela in 1901. There is a utilitarian side to gender, and that’s something a viewer should definitely mull over! Elisa’s transformation is quite visibly an attempt to “fit in” and put society’s fears (and attacks on them) at rest. Which is why she and Marcela’s transgressions are still within the boundaries laid out by society. Of course, it doesn’t work. It never does. Even Marcela’s decision to have a baby, as a way to dupe rampaging villagers, isn’t convincing enough. And perhaps that’s the struggle that Coixet wants audiences to understand.

Also read: 10 Questions I’ve Seen Every Homophobe Ask (And What I’d Like To Say To Them)

On the other side of a century, here in India, the policing and discrimination of queer people continues. “Elisa & Marcela” will make you ask why, in the past century, nothing has changed for so many people across the globe. It will make you ask how much longer people will have to hide. It’ll make you ask when exactly will society gather the courage to stand up and say “We accept you”.

And for that reason alone, “Elisa & Marcela” is a good movie to watch.