The ICC World Cup 2019 has been laden with emotions, however, the one-time saffron jersey of the Indian cricket team sent Indian fans into a jingoistic frenzy.

For about a week before the much-awaited India versus England match on 30th June 2019, we had a fair idea that the blue Indian jersey would be replaced with different colours. The reason being, both teams have blue jerseys and since it’s the English home-ground, they get to keep theirs. Eventually, the saffron and dark blue jersey of India was unveiled a day or two before the match and the “Boys in Blue” became the “Boys in Orange/Saffron” for a day. Many did not like the new jersey, which, interestingly, was very similar to the jersey of the Netherlands cricket team. 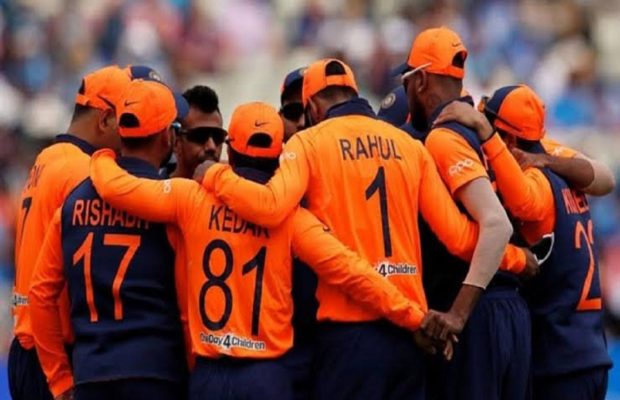 The Discussion Took About Two Seconds To Become Political

The Indian fans were suddenly divided. While many called it the final saffronisation that had made its way to the Indian cricket team, others defended the new colours by pointing out that saffron is a colour in the national flag and disliking it, is thus, anti-national. This resulted in vicious banter in different corners of the internet.

Fast forward to the match – India lost to England by 31 runs. It was a poor performance by our boys indeed, but losses are a part of the game. You win some, you lose some.

While Twitter saw trends like #BleedBhagwa, #BleedOrange, #BleedSaffron and #MenInOrange, cheering for the team, many were disgruntled by India’s poor performance and rested on superstitions of unlucky charms, which in this case was the new jersey. But you see, this was the harmless part. Indians are known for being superstitious about a lot of things, including some notable players who have been known to have a favourite bat or jersey or any other lucky charm. The jingoism was what came after.

According to several Indian fans, India had deliberately lost to England because their win would keep Pakistan out of the semi-finals. This was hailed as another ‘surgical strike on Pakistan’ and apparently, this was possible only because of the saffron jersey. Of course, after this loss, India ‘as planned’, secured their position in the semi-finals by defeating Bangladesh, and soared to the top of the Points Table by defeating Sri Lanka.

Also read: Move Over Men In Blue, These Kids Just Won The Street Child Cricket World Cup For Us

And then, India lost to New Zealand by 18 runs, where we witnessed one of India’s poorest performances, save the bowlers and Jadeja-Dhoni among batsmen. New Zealand was phenomenal in their game and will rightfully play in the Finals.

However, Pakistani fans were ready with their version of a jingoistic comeback. They erupted with joy and called India’s loss an act of karmic revenge because India ‘deliberately lost to England to kick Pakistan from the semi-finals’, as advertised by so many Indian fans. As much as I hate the mockery, this time I can’t quite blame the Pakistani fans.

There is always an amount of jingoism between Indian and Pakistani fans when it comes to cricket. It’s a never-ending loop. But this exchange was one of the most vicious ones which the game simply doesn’t deserve. And this time, we started it.