Heavy Rains Knock Out Mumbai Every Year, But Who Is To Be Blamed?

By prasad rajguru in News, Society

Monsoon is here, bring out the chai and pakodas to enjoy the lovely weather! The weather has been kind to us and brought some excellent rainfall for our pleasure and well being. There is no need to go to Lonavala to enjoy waterfalls or any beach to enjoy strong waves; you can have the same experience on Mumbai’s streets! Like every year we get to celebrate festivals, Mumbai, too, gets to celebrate the festival of watersports—thanks to our kind BMC. This year is no different, Mumbai has received rainfall of 231 mm in the last 24 hours and a total of about 550 mm in the last two days as per news reports. There has been heavy rainfall in the past four days, and it’s expected to last for three more days as per IMD.

The residents of Mumbai or those who have been in Mumbai know how daily life gets disrupted every year. The first casualty is the local train services, which get disrupted, causing panic and overcrowding. There is water logging everywhere, especially in the low lying areas of Sion, Parel, Hindmata etc. Then there is chaos everywhere: schools and colleges are shut down, office-goers are greatly inconvenienced—as rickshaw, and taxi drivers make merry out of the situation!

While this happens every year, the apathy of our authorities doesn’t change. The mayor of Mumbai, Vishwanath Mahadeshwar, has denied water logging in Mumbai and says that everything is running smoothly.

Yeah right there is no flooding, people are driving their cars recklessly in the rivers of Mumbai: 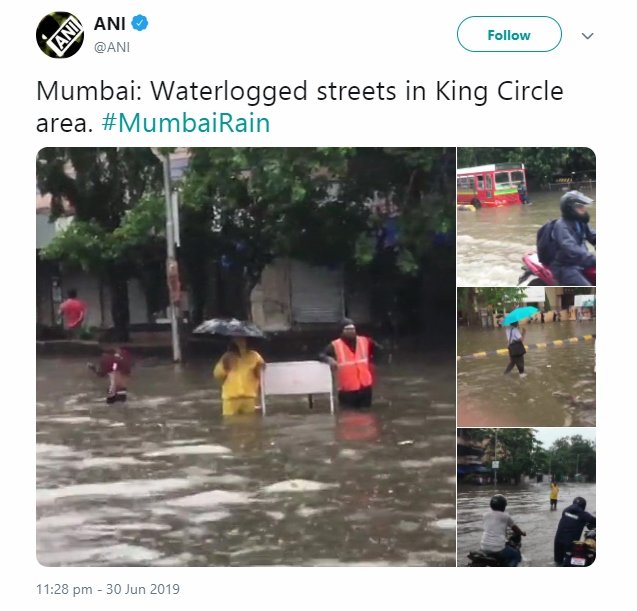 Then there are some heroes doing their bit to prevent unwanted accidents: 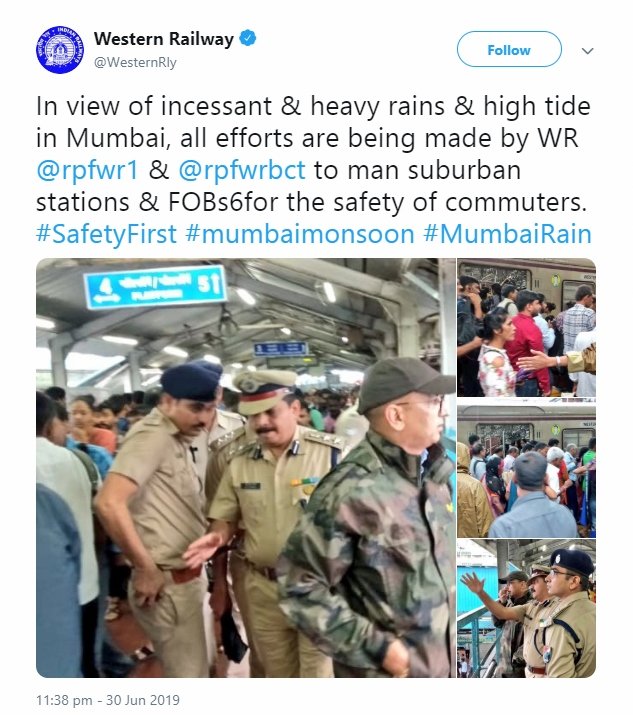 The attitude of authorities doesn’t really surprise me, most of them are out of touch with ground realities. They are rather busy fighting over petty things and playing the blame game. Many ground level workers try their best to keep things moving in this situation every year, but a lack of support from others limits them. The BMC wants to spend billions on the disastrous coastal road project and is trying to hurry it up but has a casual approach towards the basic infrastructure issues that cause embarrassment to itself. I feel that embarrassment is a somewhat redundant word because the BMC authorities have grown too thick skinned for criticism. People have also given up hope and use humour as a means to vent out their frustration on social media.

The purpose of my post is not to insult the municipal workers who work hard to keep our city running; I feel extremely disgusted by the authorities who are negligent in their approach. This situation of water logging and disruptions happens every year, but there is no plan for permanent solutions to this menace. Apart from this, there is also the problem of potholes which the BMC can’t solve despite spending crores. After the rainfall recedes, Mumbaikars will face the issue of potholes, which would claim lives like it does every year.

It’s not that Mumbai is the only place which receives heavy rainfall, there are other major cities in the world which also receive a good amount of rainfall. The difference is clearly the proper maintenance of drainage systems. There is an onus on citizens as well to ensure that there is proper disposal of garbage and it shouldn’t be thrown anywhere as it can clog drains. The city generates billions of rupees due to various businesses and such shutdowns not just hamper the economy, but it’s reputation as well—because it’s expected to compete with the likes of New York and Shanghai. BMC has enough funds, and yet it can’t find a solution to the problem that plagues us every year. There is no apparent reason as to why we couldn’t solve this problem. So is it corruption or apathy?

Also read: Article 15: A Well-Made Movie And Perhaps Nothing More Than That