Why Is The Severe Flood Situation In Assam Not Considered A National Issue?

Assam, an awesome northeastern state, is best known for its natural beauty, tea, flora and fauna, culture, ethnicity, music, people, food, and the list goes on. But every year during monsoon, the Assam floods become an event of massive destruction in the region. This year, it seems like the Brahmaputra is flowing all over the state.

The flood situation in Assam is becoming more critical and worse than in the past years. Out of 33 districts of the state, 30 have been severely affected. The Kaziranga is also badly affected as 95% of the national park is inundated. According to ASDMA, lakhs of people have been affected in around 4,626 villages in Assam due to rains. About 1,50,947 people have been shifted to 427 relief camps. ASDMA also mentioned that the water level of Brahmaputra river at Neamatighat (Jorhat), Tezpur (Sonitpur), Guwahati (Kamrup), Goalpara and many others have reached the danger level. Human casualty due to flood has increased to 30 so far.

The submergence of agricultural lands also increased to 1,73,312.12 hectare on Wednesday. Till Tuesday 1,63,969.02 hectare area of cropland was underwater.

Meanwhile, the central government has released ₹250 crore aid for the Assam floods to rescue and provide food and shelter to the affected people.

Floods in Assam is a very serious problem; it occurs almost every year. People of Assam face this grim situation every year and are forced to deal with a lot of destruction due to this cruel natural disaster.

Flood situation in the state has gone from bad to worse this year too. Almost 40% of the total land area in the state is flood-prone. The rivers Brahmaputra and Barak have more than 50 tributaries, which primarily cause floods during monsoons. It affects lakhs of people every year. But the question remains the same: why aren’t the Assam floods a national problem? 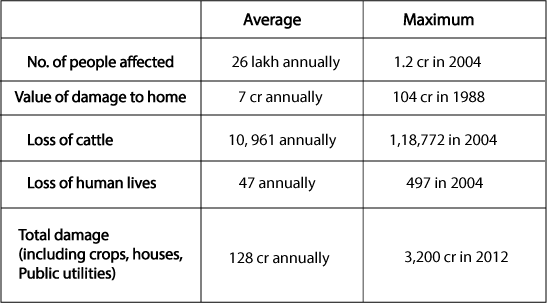 Last year, floods in the tributaries of Brahmaputra affected 4.5 lakh people across Assam. According to the Assam State Disaster Management Authority (ASDMA), 12 people lost their lives in the first wave of flood in the year. The floods inundated 11,243 hectares of agricultural lands with standing crops in four districts. Similarly, in 2017, at least 85 people were dead as a result of the flooding and 4 lakh people were affected with about 500,000 left homeless.

The Brahmaputra features among the world’s top five rivers in terms of discharge as well as the sediment it brings. At 19,830 cubic meters per second (cumec), it ranks fourth in discharge at the mouth, behind only the Amazon (99,150 cumecs), the Congo (39,660 cumecs) and the Yangtze (21,800 cumecs), according to data from a 2008 research paper.

Also read: Is The Yearly Massive Destruction In Assam A Result Of Our Negligence? Think.

We Need To Pay More Attention To Assam Floods

As we have already discussed how floods are a routine disaster for Assam, it’s high time we pay more attention to improve the state’s management system to combat the flood problem. This is a very complex issue. To prevent floods in Assam, the authorities also need to invest in research to take stock of the situation and offer viable solutions.

Some of the long-term solutions for the flood situation are:

The government needs to take these initiatives to solve or at least reduce the havoc caused by floods in this region.

India passed the National Water Policy in 1987 (amended in 2002) to keep track of water protection efforts like dykes, reservoirs, embankments, watersheds, channelization of rivers and ways to divert flood waters. As with anything that involves the natural process of nature, it is an ongoing struggle that needs constant fine-tuning.

It is seen that the government has been using only one approach towards floods: building embankments on the river. Embankments are proposed only as an interim and short-term measure to apply.

The central government’s response to Assam floods  is never up to the mark. Therefore, it’s a long pending demand to declare Assam floods a national disaster. It’s still a problem of one state, not a national issue—where the tragedy of the loss of lives occurs almost every year. The floods in Assam do not get the attention it deserves. It makes one think: has the government taken the state for granted?

While we cannot entirely stop floods, we can at least take preventive measures. We can take steps to minimize the damage; the causalities can be controlled. We need collective efforts to combat this flood situation. The central and state government must act responsibly and help the survivors in rebuilding their lives.