How Kashmir Fell Prey To Falsehood And Betrayal

“We support the govt on its decisions on J & K. We hope that this will bring peace and development in the state.” tweeted Sri Arvind Kejriwal, honorable Chief Minister of Delhi, author of Swaraj and recipient of Ramon Magsaysay Award for his exemplary contribution as an RTI activist. When it came to Kashmir, perhaps his inner calling as a ‘true Indian’ gave way to the Government’s decision of scrapping Article 370. Well, he does not deserve to be blamed, nor do all those liberals who supported and endorsed the decision openly because they have the fundamental right to expression. Only I wish the Kashmiris who are stranded at home, in the midst of a curfew too had the same right to expression. But hold on! Do those Kashmiris fall now under the Fundamental Rights guaranteed by India’s Constitution or some other rulebook?

Does Revocation Of Article 370 Really Equal ‘Development’ of J&K?

On the seventeenth day of November 1956, the Constituent Assembly hereby adopted, enacted and gave themselves the honorable Constitution for the people of the state of Jammu and Kashmir. Let’s first consider the arguments of those who think that abolishing Article 370 will bring more development in the valley. To place the facts right, it’s advisable to download the Constitution of J&K. The directive principles of the state not only contains directives on Right to Work, Right to Free & Compulsory Education but it also safeguards the Promotion of Health among its citizens. Moreover, the same directive principles also mention Right for Children, focusing on the happiness of children and also Right of Women which includes the right to equal pay for equal work, maternity leave, etc. So, when one says that dissolving the J&K Constitution and replacing it with Indian Constitution will open new doors of welfare for the citizens of J&K, I think otherwise, because the J&K Constitution already had directives on welfare, improving the standard of living of rural masses, employment, etc in place. The Human Development Index of Jammu & Kashmir is better than that of Gujarat. I remember my good friend Majid telling me that one won’t find beggars in the rural hamlets of Kashmir.

If removal of Article 370 is the only solution then why doesn’t the government bring in any industry to Manipur? It also has AFSPA and does not have Article 370 (but has Article 371). Definitely, it will boost the government’s ‘look east policy’. The former Chief Minister of Tripura Shri Manik Sarkar removed AFSPA from his state on 27th May 2017. As per a news report by Business Standard dated 4th June 2015,  Bangladeshi food and beverages processing company PRAN set up a plant in Tripura at a targeted investment of Rs. 200 crore. 500 people, who were mostly locals, were employed. Through this case study, I failed to understand the relationship between Article 370 and development, but I could find a relationship between AFSPA and development. On the one hand, the Government of Tripura empowered its internal security so efficiently that it bid farewell to AFSPA after 18 long years. Numerous Governments in J&K, which include National Conference along with its ally Indian National Congress and also People’s Democratic Party along with it’s then ally Bharatiya Janata Party, were found to be incompetent in their pursuit of empowering the internal security. There can be debates on the geographical location but remember that our Border Guard agencies are competent enough in safeguarding our borders, whether it is shared with Pakistan or China. 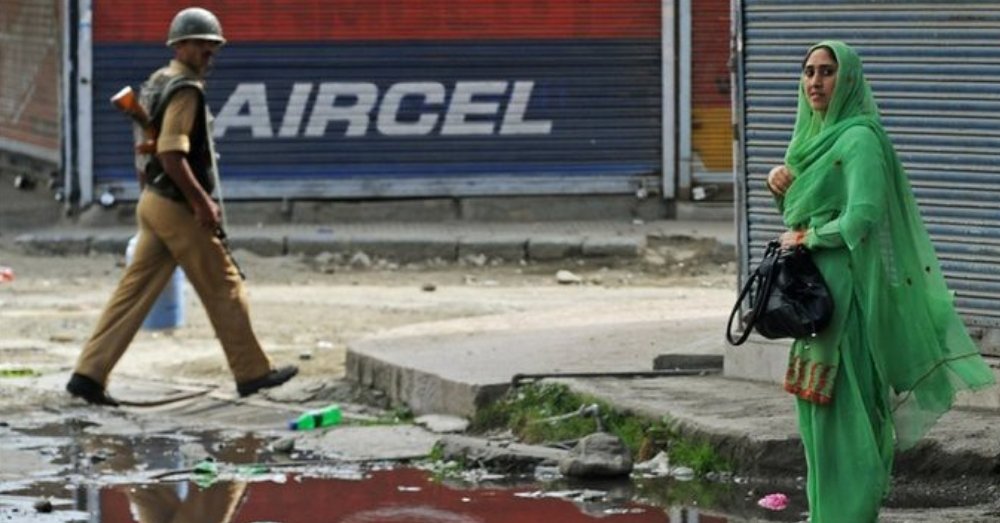 Re-Visiting The Past To Make Sense Of The Present Situation

After the Partition in 1947, the Hari Singh, the last Maharaja of the princely state of Jammu & Kashmir decided to make it an independent state under his leadership. In the month of October 1947, Pashtoon tribesmen, allegedly with the support of Pakistan, attacked the state by entering from the Northwest Frontier Province of Pakistan. The Maharaja appealed to India for its help. India did agree to extend its help provided the ruler signed the Instrument of Accession. While the Government of India added a provision that it would be submitted to a “reference to the people” since “only the people, not the Maharaja, could decide where the people of J&K wanted to live.” It was a provisional accession. The Maharaja did sign it and in lieu of it, India deployed its armed forces who forced the invaders to evict.

Clause 7 of the Instrument of Accession signed by Maharaja Hari Singh declared that the State could not be compelled to accept any future Constitution of India. The State was within its rights to draft its own Constitution and to decide for itself what additional powers to extend to the Central Government. Article 370 was designed to protect those rights. Neither India nor the State can unilaterally amend or abrogate Article except in accordance with the terms of the Article.

Scrapping Of Articles 370 and 35A, And The Aftermath

Now let’s understand how the whole abrogation of Article 370 happened and the entire issue from the perspective of a Kashmiri. After the evacuation of Yatris (pilgrims) who participated in the Amarnath Yatra, there had been rumors floating in the valley that Article 370 and 35A will be abrogated by the Government with the support of the Governor. Most people started panicking. They started going out to stores and buying food, gas and all the necessary commodities. They started spending all the cash they had. The worries intensified in the lives of people who were self-employed or from lower-income groups. At night, there was a message that flashed on mobile screens which said that due to the request of the Central Government, the mobile networks were to be shut down indefinitely. All mosques and centers which had a public addressing system began announcing total curfew from 5 A.M. the next day. More and more military personnel appeared on the streets. Men with guns and barbed wire. There are many reports that pedestrians and people on vehicles were harassed, that they were stopped and asked to prove why they were outside. And this was not once or twice. Previously, there were instances of violence and bloodshed during curfews. Thus the tension continues to linger in the minds of Kashmiris whose faith was to be decided far far away in the national capital without their knowledge and opinion. 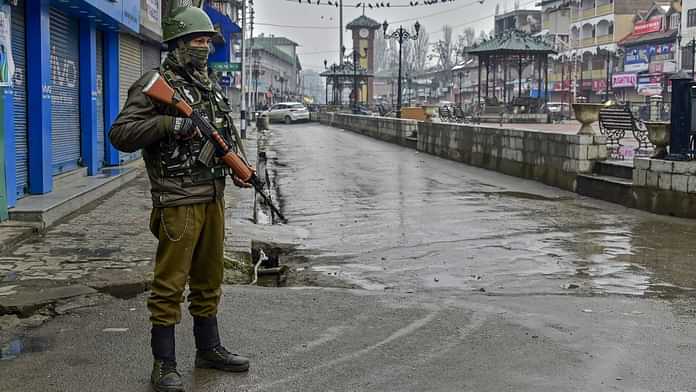 I remember being trolled on social media for not being a ‘true Indian’ and being an ‘anti-national’ for my critical views on the abrogation of Article 370. In such a world, even Tagore, the great poet who penned India’s National Anthem would have labeled the same as me because he prioritised humanity over nationalism. In this case, I think there is no space for India to showcase his/her ‘agnipariksha’ (trial by fire) on ‘Indian-ness’. Rather this is about the fate of Kashmir and Kashmiris for whom their identity of their land, culture and their whole existence is intimately linked with those which the present Government wants to abrogate. There are instances where some Opposition leaders and liberals were labeled as ‘undemocratic’.

Also read: No Country For Kashmiris

For me, democracy can not be measured by the speed at which Article 370 was abrogated in the floor of the Parliament while the citizens whom it will impact are kept in the dark. A true healthy democracy can only be established by allowing self-determination among the citizens who will be governed. Else I feel India and China will be on the same page when it comes to democracy. Jammu & Kashmir is not the only union territory that received special category status. Some of these states are Maharashtra, Gujarat, Nagaland, Assam, Manipur, Andhra Pradesh, Sikkim, Mizoram, Arunachal Pradesh, Telangana, and Goa.

What To Think About When Thinking About Kashmir

What do we know about Kashmir? It is said that it’s a Muslim majority state with rampant terrorism, stone pelters who are funded by Pakistan and separatists who occasionally hoist Pakistan flags. Well, at least this is the information that is usually offered by mainstream media, and we tend to accept it at its face value just because the news channel or newspaper said so. This reminds me of an interesting incident that happened in the United States of America. When Iraq invaded Kuwait (1990 – 1991) under the leadership of Saddam Hussein, USA was furious and wanted to retaliate. Following the Vietnam war (1955-1975), Americans were reluctant to send their sons to battle and their plea to the White House was that they do not want any of their son to come back in body-bags. George W. Bush, the then President of the United States of America was in a real fix until they hatched a plan. In no days, a Kuwaiti girl named Nayirah al-Sabah testified in front of the Congressional Human Rights Caucus on October 10, 1990, that she saw Saddam’s men removed babies from incubators and left them to die. News agencies and broadcasters like ABC, NBC and CBS sold the news like hotcakes. The testimony was widely publicised and was cited numerous times by United States senators and President George H. W. Bush in their rationale to back Kuwait in the Gulf War. This outraged the Americans who supported Bush in his military intervention. After the war ended and media started checking facts, it was revealed that the testimony was false and Nayirah happened to be the daughter of Saud al-Sabah, the then Kuwaiti ambassador to the USA. Thus, let me put it straight. Do you think that everything you see in media is the truth? Can’t the state use media in order to cultivate their own propaganda? I strongly feel it lies on our rationale on how we accept it.

Curfew, lock-down and cutting network connectivity only show that their (Kashmiris)  fate is decided by very few powerful people who are far away from the valley and know nothing about the culture and people whose fate they had overturned overnight. At a time when we express our pride for our nation and its founding principles, in a democracy as large as ours, I believe it’s time for us to sit back and reflect on the democratic values that we as citizens inculcated over the past 72 years. The larger dialogue should be on the basis of self-determination. To set the tone of our democracy, the dialogue should revolve around whether “Do Kashmiris want India or Pakistan or an independent state?” Not propaganda and deceit.

Also read: By Denying Kashmir A Voice, Hasn’t The Federal Fabric Of Indian Democracy Been Attacked?