Hyderabad Uni. Students Were Denied Their Right To Protest, Hours After #370 Was Revoked

By Anonymous in Campus Watch, Kashmir

The imposition of Section 144 caused an unrest amongst the students of Hyderabad Central University on August 5. Cyberabad police officials and Rapid Action Force (RAF) were deployed in the southern part of the campus, vacating the students from the shopping complex, a hangout area in the south of the university.

The student community organisations, comprising of 200 students gathered here at 6:30 p.m. to condemn the decision of the BJP-led central government to repeal Article 370(1) and 35(A) which gives special provisions to the state of Jammu and Kashmir.

Immediately after the gathering commenced, the university released a notice issued by the SHO, Gachibowli, stating that the assembling of five or more person in the limits of Cyberabad under Section 144 Cr.P.C, is prohibited until further notice. 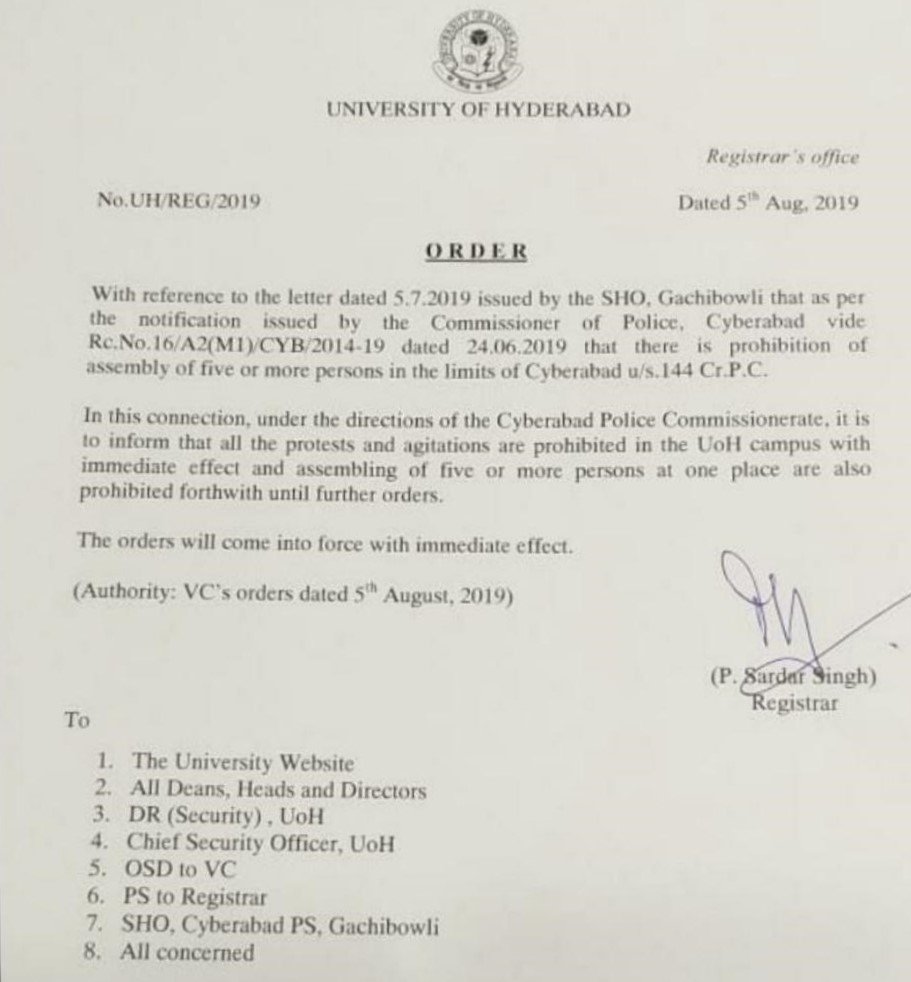 “The protest was mainly around the problem with heavy militarisation of Kashmir and human and political rights violation in Kashmir,” says Vineeta*, a PhD scholar, who joined the protest. “We were making posters and the police officials snatched it from us. One of them asked his colleague to burn it after reading slogans on Kashmir, citing that there are police orders against any public gatherings on this issue,” she adds.

The students were threatened with arrest if they did not disperse. “They were blatantly refusing to give any clarification as to why we cannot have a democratic demonstration. The protest call was in line with the right for democratic dissent and the need to uphold the spirit of the constitution,” said Vineeta*.

Earlier in the day, the police officials harassed a group of Kashmiri students who were having tea. “We were already worried about not being able to contact our family members, on top of that, the police threatened us with arrest and asked us to disperse,” says Hasan*, a master’s student at the University of Hyderabad (UOH).

In the meantime, the Akhil Bhartiya Vidyarthi Parishad (ABVP) gathered around with 20 people, including members from outside the campus. The chants of slogans like “Bharat Mata ki jai” and “Kashmir maango to cheer denge” echoed around the campus. “They intend to create an atmosphere of fear and authoritarianism inside the campus,” says Sundar*.

“The fundamental right of citizens to resist and question the undemocratic decisions and raise the dissenting voices were emphatically curbed down by the state machinery’s intervention,” posted the HCU’s SFI wing.

The students waited till 7 p.m. after which they called off the protest gathering on having talks with the police officials. “Students were afraid of being arrested, which made them disperse,” says Hadif Nisar, Jammu and Kashmir Students’ Association (JKSA) president. He adds, “It’s bad news for the students that they can’t have a dialogue and discussion at an educational institute. Imposing of Section 144 was a sign of suppression on students.”

“I told the police officials that this is our canteen space, we gather here to have tea and then disperse. They forced us to empty the space where we belong, by threatening to books cases on us. In order to avoid any mishap, we dispersed.” said Naveen Eram, Students’ Federation of India (SFI) representative.

“We called off the protest considering the tense situation. This does not mean we are surrendering our rights nor we are stepping back from our solidarity with the people of Kashmir,” says Students Islamic Organisation (SIO) President, Faseeh Ahmad EK, who had joined in for the protest.

Also Read: Why You’re Wrong In Celebrating The Removal Of Article 370

There were eight Cyberabad Police cars and 2 RAF vehicles, including three uniformed police officials and one official in civil uniform, in charge of controlling the situation.