By Sumedha in Politics, Society

There is a lack of a wide range of opinions on topics these days. Everything has become a for or against debate. We don’t do measured arguments or counter-arguments. We are all just trolling anyone who tells us our perspective is wrong. It’s a strange ganging-up of political ideology which makes no sense to me personally. We used to be an anti-authority country with R.K. Laxman’s “The Common Man” and Mussaddi Lal of “Office-Office”. We used to know that politics in India is a drama performed for votes, while no real policy is implemented to benefit the average, middle-class Indian. 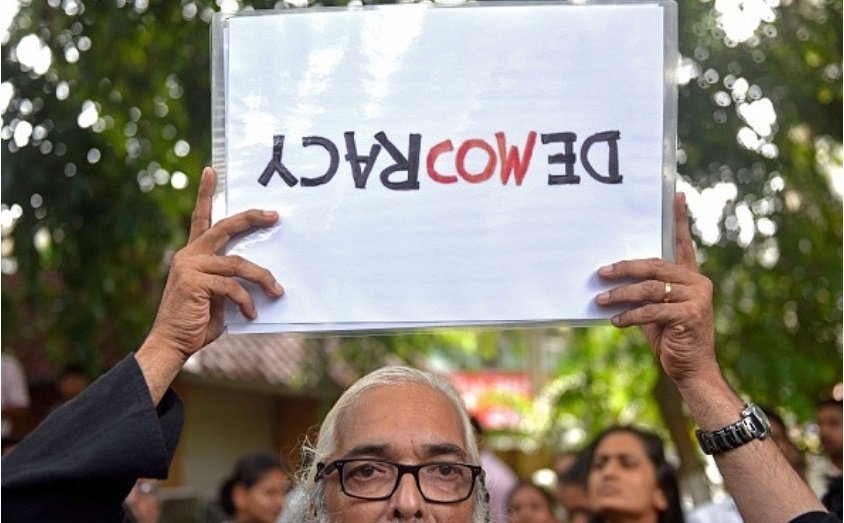 And it is absolutely true today as well. Even under the current government, we have repeatedly seen no real action but a lot of drama. The economic slowdown of the last five years has now become a total shutdown. All core industries are performing poorly and continue to be in huge losses while the government creates new territories and promises economic development at the backs of private players (who have no money for further investment). We see no social change and crimes inspired by misogyny and religious sentiments on the rise. Even the percentage of MPs elected with a criminal background have increased!

Our climate change problem has become so massive that the entire country is experiencing floods in literally every region, yet we hear about further clearances for projects given by departments created to protect our environment. Where is the progress that we have been promised again and again? What happened to India becoming a “superpower”? It is the same song and dance of “Vikas” over and over again.

So, I look at the language of our common people, and for sure the anti-authority sentiments have changed completely. We used to know “sarkar” was never good. But now we blindly trust our overlords. We feel pride in their empty speeches proclaiming the same vague ideas that many before them have filled stadiums with. Not a mention of actual action, strategy or result, yet we are so confident of their abilities. We used to understand that corruption existed in human nature, but now at the news of botched numbers and reports, we proudly blame “external foreign forces” for messing with our media. Meanwhile, not at all questioning how more than 80% of our “internal” media outlets in the country are owned by a single corporation at its head—the only corporation which announced further profits and investments at their latest AGM. We don’t question our political leader we like them for saying mean, hurtful things. We like them for their viciousness.

Also read: We Can’t Wish India’s Diversity Away By Using Force On Our Own People

These words I see online, are now recognized across the globe as hate speech by the emerging right-wing. In the U.S., they are using “infestation” to refer to people of colour. How is it any different here, when we are using “pests”, “infestation” to refer to a group of people who are all Muslim? It baffles me how our people and media are using hashtags with Kashmir for “One India” as if the words “integration”, “assimilation” weren’t used by Nazi Germany to justify deaths of millions of innocent people. In the name of nationalism, we want to enforce on an incredibly diverse country, one single identity.

The culture of hero-worship has become so strong in India that we find justifications for why British colonialism was good! Some of our people have no reservations against joining white supremacy movements (when it is literally a racial movement against brown people). We think we can say, “snowflake”, “SJW bashing”, “virtue signalling” to people when those words and movements were created in a political environment which is not similar to ours and used to silence those supporting our brown identities. That is the shallowness of our current Janta’s (public’s) political understanding.

It is a farce when major journalism outlets join in, trying to shame opposition leaders by calling them “communal” for pointing out that Article 370 decision is motivated by religion. As if Hindutva leaders have not immediately come out and displayed their misogyny and bigotry at the announcement of the decision. There are infinite Hindutva supporters online who have openly posted several messages against Muslims. People are openly attacking Islam and even sharing threatening videos on platforms like Tik-Tok.

Most media outlets are interviewing only Kashmiri Pandits when they are seeking opinions. All the footage of “normalcy” are from Hindu dominated areas of Jammu and Srinagar. Hindu Brahmins are patently expressing their joy at the “victory” they have achieved. Instead of questioning the enforcement of a total lockdown, at the whim of only two national leaders, people are readily supporting “jailing” of opposing political leaders and journalists. This denial of addressing our Islamophobia has allowed a total breakdown of civil code and constitutional integrity for the first time in four decades. But now that the common man is missing from all this madness to make his observations, it seems a certain mania has taken over instead.

The language of hate is clear and very precise. It is motivated by the people in power no less. There is no scenario in which a state’s chief minister can make horrid misogynistic statements, without knowing he will not lose the support of the public. The janta is desensitized to all forms of violence. And if it does not wake up to its own prejudices, this hate will only continue to propagate through policy. Words are powerful; the pen is mightier than the sword for a reason. We need to pay attention to our words and their history.