By All India ITR 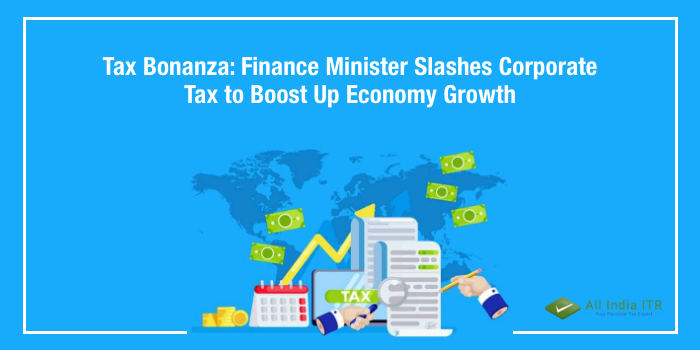 The Finance Minister, Mrs. Nirmala Sitharaman on 20th September has taken a new decision for the Indian economy by unveiling a tax bonanza for Indian Companies. As per the historic move, Nirmala Sitharaman announced a deduction in the country’s corporate tax rate to 22% (effective rate of 25.17% including cess and surcharge) for existing firms, and to 15% (effective rate 17.01%) for new domestic firms in the manufacturing sector. The recent measure has aimed to pull the economy out of a six-year low growth and to address a 45-year high unemployment rate by reviving private investments with a Rs 1.45-lakh crore tax break.

Alternatively, this is one of the major policy reforms since 1991. However, the companies who do not avail any additional incentive or commission, the effective tax rate would be just 22%. Meanwhile, many of India’s prominent equity markets applauded the decision, the bond market stuck in between the fear that the government may now have to borrow more to meet its liabilities.

According to the Income Tax Act Rule, the Domestic, as well as foreign companies, are liable to pay corporate tax. While a domestic company is taxed on its universal income, a foreign company will be taxed on the income earned within India. The Corporation tax is imposed on the net income of the company, both private and public which are registered in India under the companies act 1956. In addition to that, surcharge at the rate of 5% is levied if net income is in the range of Rs 1 crore to Rs 10 crore. If the net income exceeds Rs 10 cr, surcharge at the rate of 10% is levied.

At last, it would be exhilarating to see this tax cut will give companies a bit more financial space to maintain operations, create more employment and the growth of the economy.

For more details about corporate tax and efiling of income tax return visit our website : https://www.allindiaitr.com

Unearthing Inner Peace In Your Roots

Role of women in technology