Catch any Indian on the street right now, whether in cities, villages or inside 5-star meeting rooms and conventions and ask them what they think about abortion. Chances are that you will be told it is a terrible thing because girls are being killed.

As a doctor and a woman, I cannot stress how important it is that this conversation should change. And it should really be a conversation about why these two are separate issues and why women must always have the right to safe abortions in order to control their own bodies and lives.

An abnormal sex ratio is dependent on two things —there being fewer girls as compared to boys when we count the ratio at birth—and also fewer girls than boys under the age of six. One of the contributing reasons is son preference, whereby people try to find out if they have a male or female fetus during pregnancy and select to keep the male and not the female. At another level, when the girl child is born, families often do not feed her properly, do not immunise her or give her appropriate healthcare when she falls ill, thus leading to more girl children under six years of age dying than boys the same age.

And yet people conflate this gender bias with the act of abortion. Female infanticide—killing baby girls after they were born, has been a centuries-old practice in India and still continues in some pockets. The advent of some technologies meant that people could choose to terminate a pregnancy rather than wait for the girl to be born.

On the other hand, the reality of abortion is that over 90% of abortions are for pregnancies that are unplanned and unwanted for many, many other reasons. Rape, not being in a stable relationship, lack of knowledge of contraception, failed contraception, unavailable effective contraception, marital rape, partner refusing to use contraception, violence, coercion, fetal abnormality, women’s ill health, economic reasons and so on.

If there is a connection between abortion and female infanticide it is this: the reasons for both are mostly intertwined with sexism.

Both men and women have sex but only women run the risk of getting pregnant if contraception is not known about, not available, not used, or if the sex is forced upon them. In an environment when girls in India are still subjected to child marriages, incidence of rape and violence is high, marital rape is not recognised, contraceptives are sometimes not available or can fail, women simply must have an option to not continue growing a pregnancy in their bodies which would harm them physically, mentally, socially, economically.

Many women do not get a choice to say no to sex within marriage and hardly any women get the choice of what kind of contraception they would like to use—or whether to use it at all. That’s if they know there is such a thing as contraception to start with, in a culture where we never discuss sex openly and break out in hives at the thought of sex education.

Samyak, an NGO based in Pune runs a telephone hotline to help women seeking information and services on abortion. (Contact information at end of the piece—AOI).

Here are some stories from their calls over the last few months:

‘A’ was 17 years old, working as a domestic worker with her mother in Pune city. She met a 20-year-old boy who said he would marry her and forced her to have sexual intercourse. Next month she missed her periods but due to earlier irregular menses, she ignored that. Finally, after three months she told her mother who took her to the hospital and they found out she was pregnant. Due to her age, the doctor informed them that she was obliged to report this to the police. They refused and were given the Marjee hotline number. By the time she was able to reach a referral hospital that would agree to it she was 18 weeks pregnant.

‘B’ was an 18-year-old engineering student; she and her boyfriend from class were in a relationship. After missing her period, she found out that she was pregnant but tried some home remedies. When she realised they were not working, she called the Marjee hotline who referred her to a local hospital. She managed to get the medical abortion pills from the doctor but had to pay 9000 rs. (the pills cost less than 500 Rs)

‘C’ is 27 years old and wanted an abortion due to an ongoing family dispute. By the time she called Marjee Hotline, she had completed 20 weeks of pregnancy and the referred hospital was unable to help her. 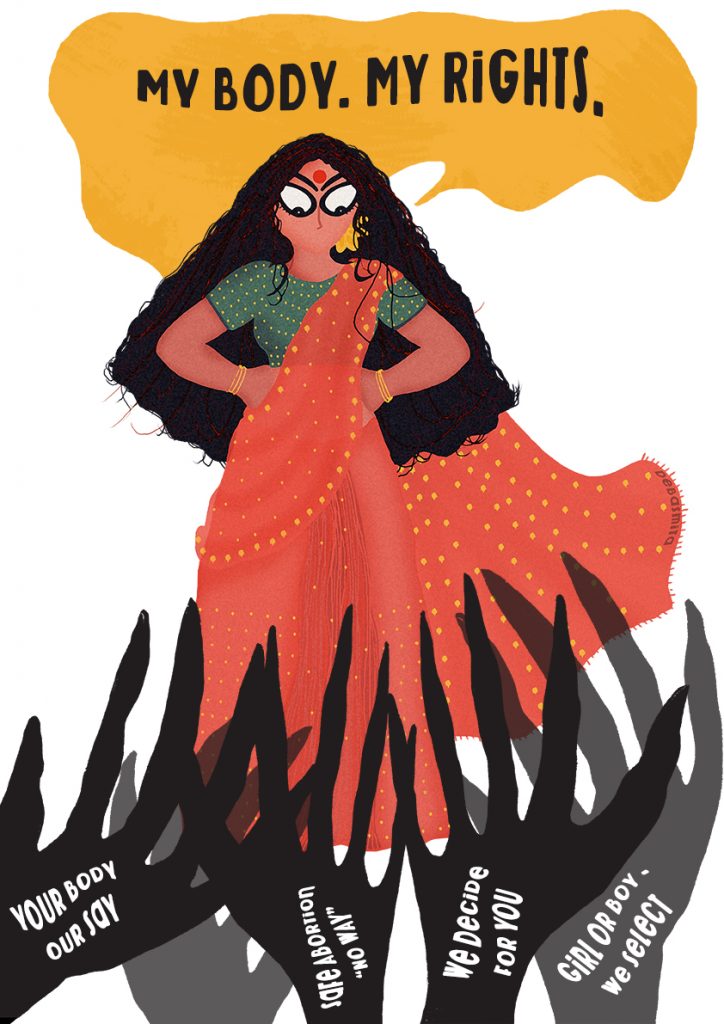 So, clearly, many girls and women across the entire country are at risk of unwanted pregnancy and need a safe option that can help them discontinue being pregnant. The law allows it under certain conditions and ideally, it should be her right.

In any case, linking the sex ratio to abortion is asking the wrong question.

Also read: If Abortion Is Legal In India, Why Does A Woman Have To Go Through Hell To Get One?

No matter what lip service we pay to ‘beti bachana‘ (save daughters), girls are just not equally valued. Even in urban, educated families, there are still some who will not even drink water at their daughters’ place once she has been married. Even if the girl works and earns after marriage, it is very unlikely that she will have the freedom to use the money as she wants, and quite unlikely that it could be used to support her parents in their old age. Until girls are equal to boys, people will keep choosing to not have them. We need this to stop by ensuring gender equality and women’s empowerment.

On the other hand, as long as women and men have sex, women will keep needing to control their fertility and their lives by using contraception, and on the occasion that it cannot be used or it fails, then by having a safe abortion.

The reason female infanticide happens is the same reason we do not concede women’s right to abortion—it really is as simple as that! And that’s the thing we must all change.

Dr Suchitra Dalvie is a gynaecologist with a passion for gender and rights issues, especially in the context of their impact on women’s health