By Yash Johri in History, Politics

It’s a foregone conclusion that today we live in a BJP political system wherein the ruling party, in large part, because of the Prime Minister’s widespread popularity and efficient party machinery, has become the principal pillar of Indian politics. However, when Narendra Modi ascended the gaddi (throne) at 7, Race Course Road in May 2014, there was still work to be done to gain control of the levers of power. While the winds of change were certainly blowing, most governmental institutions, media outlets, thought enterprises, opportunistic regional parties, and other establishments were populated with individuals sympathetic to the Congress party. The business community as well had honed the ins and outs of what is now colloquially referred to as the Durbari Raj of the Ancien Régime. Almost five and a half years on, any casual observer of national politics will regale one, with stories of how these power structures stand changed and in some cases, transformed. It’s within this context that the balance of power is shifting within the realm of ideas as well. 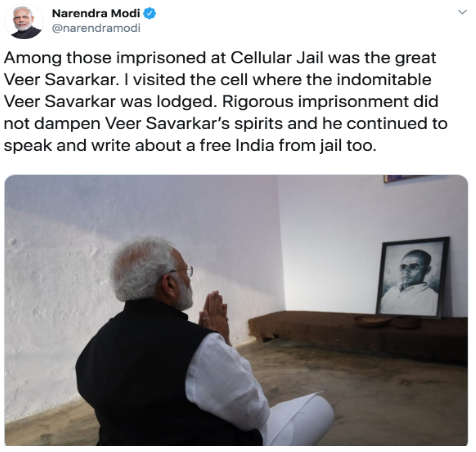 A conscious and meticulous push has been underway to make acceptable to a wider audience the ideas of the Indian Right. This effort undoubtedly aspires to be at the expense of, or detrimental to, the Nehruvian Consensus,[1] given that three generations of Indians have grown up and been schooled in the same. One of the exertions, in the midst of this, has been to resuscitate Vinayak Damodar Savarkar, from whose pen flowed the very ideals upon which many leaders of the present dispensation have been nurtured. The Prime Minister’s visit, on December 30, 2018, to Savarkar’s cell at the Kala Paani Jail in the Andamans as well as the Home Minister’s living room wall being adorned with Savarkar on one flank and Kautilya on the other, certainly reinforce the regard this historical figure is held in by the two most powerful men in the country.

While the endeavour at present is more sustained and consistent than before, it’s important to emphasise here that remembering and paying respect to Savarkar isn’t a sudden development and has always been a salient point in the BJP’s agenda. It was Prime Minister Vajpayee’s government in 2003 that first unveiled his portrait in the hallowed environs of the Central Hall of Parliament.

Vikram Sampath, Historian (PhD. University of Queensland) and Vaibhav Purandare, Senior Editor, Times of India have authored biographies of Savarkar that have recently been published by Penguin and Juggernaut. Sampath’s book is titled Savarkar: Echoes From a Forgotten Past (1883-1924) and Purandare’s is called Savarkar: The True Story Of The Father Of Hindutva.

While the present political climate has certainly encouraged interest in Savarkar, both these works in highlighting Savarkar’s life, have provided to a certain extent an alternative history of the Indian freedom struggle. Pertinent to note here is that Sampath is very much for the ideological ecosystem, whose formation is being encouraged by the Government. His book has been promoted by the Prime Minister on Twitter; additionally, he is followed by the Prime Minister on the same platform. Moreover, he was invited to the swearing-in of Modi 2.0 and was given the credential of having been one of the four writers at the residence of the President, Rashtrapati Bhavan, in 2015.

Both works locate Savarkar in the heart of the revolutionary movement as a protégé of Tilak, Bipin Chandra Pal and Shyamji Verma[2] leading the charge against the British, as opposed to the moderates of the Indian National Congress led by Gokhale in the first decade of the 20th century. Both accounts intricately detail the protagonist’s difficult childhood losing both parents at a young age and living through the trials and tribulations that the plague brought to the towns he dwelled in i.e. Nasik and Bhagur. What is of immense value in both works is that they give structure and an ideological threat to the numerous violent uprisings and events that took place during that time; from the assassination of Plague Commissioner Rand by the Chapekar brothers in 1897 to  the killing of Sir William Curzon Wyllie by Madanlal Dhingra in 1909.

Abhinav Bharat, the secret society inspired by Mazzini’s Young Italy and founded by the Savarkar brothers, came to serve as the thought and organisational headquarters of many such revolutionary activities. Vinayak Damodar Savarkar was undoubtedly the principal ideologue as well as motivator- in chief. It’s been recounted that Savarkar and Dhingra lived in India House in London together up to the fateful incident. Senapati Bapat, VVS Aiyar, Lala Har Dayal (Ghadr Movement), Bhai Parmanand (Ghadr Movement), Virendranath Chattopadhyay (Sarojini Naidu’s brother), Sikandar Hayat Khan (Unionist Party), Madame Bhikaji Cama, to name a few among numerous others were the freedom fighters he interacted with and spurred into action. 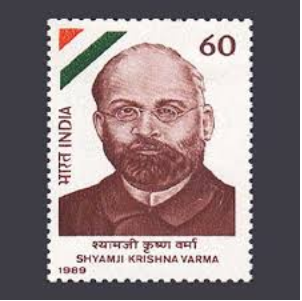 Savarkar was very inspired by the collective spirit of the revolt at the time of the1857 uprising, and was the primary force that debunked the narrative that it was merely a Sepoy Mutiny and gave it a nationalistic interpretation as the First War of Independence. Until Savarkar’s sentencing for two life terms to Kala Pani in the Andamans, his organisation and movement had gained considerable currency amongst the revolutionaries. In the aftermath of the Wyllie incident, the British having given Savarkar a sentence of two life terms, were clearly well versed with the man’s revolutionary potential. Both works, Sampath’s in detail and Purandare’s more succinctly elucidated this period in the protagonist’s life using his own autobiography, ‘My Transportation For Life’, and recovered trial and case documents as the primary source.

While there is immense value to Sampath’s biography detailing the Indian revolutionary movement in the late 19th and early 20th century, the reader, however, faces a major challenge in trying to understand Savarkar’s motivations in authoring his seminal tract, “Essentials of Hindutva”. The major inspiration that was derived by Sampath from Savarkar’s development of the Hindutva tract was his opposition to the ongoing Khilafat movement in the early 1920s, as well as his disgust with the manner in which his Pathan Muslim jailers treated fellow inmates by converting them to Islam.

While on Page number 369, at the beginning of the 10th chapter, the author makes the following statement, “It is important to understand this issue [Khilafat] because it sets the context in which Vinayak penned his magnum opus on Hindutva and his belief in the need for Hindu society to organise itself politically,” he doesn’t spend any page-space, explaining how Savarkar intellectually grappled with the events of the time that subsequently led to the writing of “Essentials of Hindutva.” On page numbers 391-392 in the last two paragraphs of the chapter, after giving a mere chronology of the events of the early 20s, in the intervening twenty-two pages, Sampath abruptly states “Meanwhile, it was in the dark confines of Ratnagiri prison that Vinayak began writing his magnum opus… These were distilled from his experiences in the Andaman and Ratnagiri jails with respect to the conversions, his own attempts at shuddhi and sanghathan and the raging debates in the country surrounding agitation.” Purandare explains in a little more detail about how the movement impacted Savarkar. He states that while Ataturk Mustafa Kemal and his followers were themselves for the abolition of Caliphate it seemed absurd to align them in such a losing cause. In addition to these practical reasons, the Hindu community being persecuted in the name of the Khilafat movement, most particularly by The Moplahs in the Malabar region, affected Savarkar tremendously as thousands were converted to Islam while more than 600 Hindus were killed.  Around this time, as per Purandare, Muhammad Ali promoted by Gandhi as an ambassador of Hindu Muslim amity, unfortunately, gave the entire Khilafat movement a further communal colour by calling for non-muslims to be converted to Islam and further prayed for the day when he would convert Gandhi to Islam.

These unfortunate circumstances no doubt had an immense bearing upon Savarkar’s thought (terribly affected by the Moplah Uprising, he authored a piece titled Mala Kai Tyache or How do I Care?) and also gave a fillip to the socially divergent forces in society. In addition to these circumstances, the revivalist movements inspired and buttressed by Dayanand Saraswati and Pandit Malaviya among others added to the environment within which Savarkar was thinking and writing. 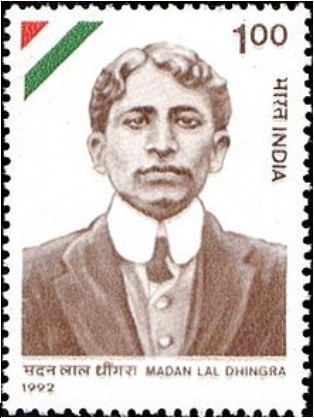 While Savarkar having been released from prison in 1937 returned to being politically active leading the Hindu Mahasabha, however, his national impact paled in comparison to that of the Congress or Muslim League leaders. This is self-evident from the Mahasabha’s performance in the 1946 provincial elections; losing all 18 seats contested. Ironically, however, having not supported the Quit India Movement, thereby avoiding gaol – the Hindu Mahasabha got the opportunity to form coalition governments in North Western Frontier Province, Sindh and Bengal with predominantly Muslim parties. In the political arena, his deputy Dr Syama Prasad Mookerjee soon overshadowed him, taking a place in Independent India’s first Cabinet.

Following Independence, although acquitted, his public repute dealt with a fatal blow, being indicted in the conspiracy to assassinate Mahatma Gandhi. While charges were dropped due to a lack of corroborative evidence, the political establishment of the day, particularly Sardar Vallabhai Patel still held him morally culpable for being the ideological mentor to Pahwa, Godse, Apte and Karkare.

Also read: 100 Days Of Modi 2.0: Are We Really Heading Towards Development?

Shortly after the 1984 general election, Vajpayee in his classic poetic style delivered a speech on Savarkar at the Savarkar Darshan Pratishtha in Pune, Maharashtra. After highlighting numerous admirable characteristics of the man that have been voluminously detailed in Sampath’s and Purandare’s work, the former Prime Minister segued into recounting anecdotes that possibly gave colour to his interpretation of Hindutva. He first highlights how, on a trip to Afghanistan as Foreign Minister, he visited Ghazni to understand where the famous invader Mahmud originated from. He recounts he came across a dusty little town and goes onto state that a lootera (robber) from such a backward area came and conquered our lands, largely because as a community we were so divided. He then recounts an anecdote from the same trip when he realised that Afghans also consider Kanishka from the Kushan Dynasty as their forefather, to drive home the point of common ancestry that exists in the sub-continent.

Subsequently and most importantly for today’s context, Vajpayee states and himself agrees with Savarkar’s statement of India fundamentally being a Hindu Rashtra. However, he states (in minute 22:50 – 23:30) that Savarkar also went on to distinguish between Hindu Rashtra and Hindu Rajya (Rule), and stated that an independent India would be based on the principle of equal treatment for all. He concluded his speech by urging the audience to further understand and explore Savarkar’s long-neglected works and not to easily accept what is commonly said about him. In today’s day and time where religion is becoming an increasingly salient feature of public life, it is imperative to debate, and explore further the distinction that Vajpayee makes between Hindu Rashtra and Hindu Rajya.

[1] Historian Mridula Mukherjee says, “The Nehruvian Consensus has three elements, the first is inclusive development, providing for the poor. The second is inclusive democracy, adequate representation for all – a celebration rather than a discomfort with diversity. The third is inclusive discussion, with debate and dissent.”

[2] Whose ashes then Chief Minister Modi carried back from Switzerland in 2003 and subsequently dedicated a monument, Kranti Tirth in Mandvi, Gujarat in his memory on 13th December 2010.