Can A Bridge Between State And Central Govts Reform The Education System?

By Gautam Das in Education, Society

The great nation of India was born out of the sheer struggle of its people to achieve a better life of dignity and prosperity for all. It was a struggle to take back the right to live and to lead the society from the clutches of the oppressive British-Raj regime, along with the hope to see a future much better than days of feudal lordship and kingship. The people of India no longer wanted to bow their head to any queen sitting somewhere in the world, or any king within India, with whatever line of blood flowing in his body.

We wanted to build a just society where attention would be given to the welfare of common people than the well-being of the elite ruling classes. This might not be possible until we work towards the cause of upliftment. The voice of the people is the only power that can shake corridors of political fortress, to make it echo with their might, and make sure the message reaches the ears of people in power.

Education is vital in this context as we want people to raise the pertinent issues that address justice for all and not only a few. A narrow vision will never help the nation become what it is capable of. If people of a nation become visionary in their own might, they will do things in their life which will help society and the neighborhood grow in a positive way. Peace and development will lift the standard of living and eradicate the menace of poverty.

To illustrate the problem, if people of certain cities in India were to avoid using plastic packing in their daily life, and not drop garbage into the city’s sewage system, or if people would avoid blocking the flow of rainwater by not constructing structures that come in the way of traditional paths that rainwater flows through, parts of cities will not be waterlogged. The loss of property and livelihood in some cases can also be prevented. 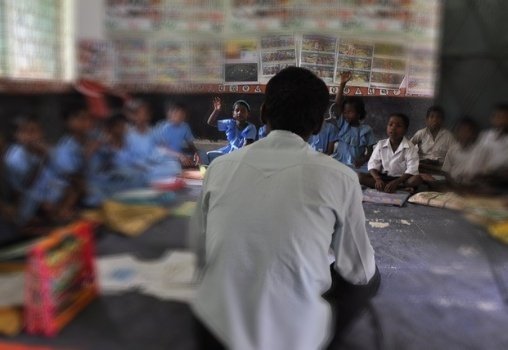 It is possible to achieve significant changes only if people carry out their life with a vision for a great India. It’s not just pages in our history textbook that make us great, but its respect for our neighborhood, environment, water bodies, and our effort to achieve economic and cultural prosperity that will make us a great nation. We should learn from the mistakes of other nations and not destroy our land, air, and water while putting our efforts in building the nation.

Education can play an instrumental role in helping people develop the ability to act like a visionary. The education system in India has been paralysed by decades of ignorance by the ruling classes. Here, it is the ruling class versus the common people, as members of ruling classes behave in the same way in most practical aspects, irrespective of which party is in power.

Education is in the Concurrent List since the 42nd Amendment Act of 1976. Still, most aspects of education are taken care of by the state government. The status of the education sector in India is, if not impossible but very difficult, to explain. Along with reports of fake educational credentials in Bihar, there were reports on how in Delhi it’s nail-bitingly tough to secure a seat in the subject of choice for students who are not much above average. There is no parity in the level of education, from primary to higher education, across the length and breadth of India. India has wide inequality not only in terms of wealth across the nation but also in education. There is hardly much done by the central government to improve higher education, and never enough by the state government in providing national-level solutions in their home state. Many governments in the past were mostly interested in promoting history textbooks that would suit their political viewpoint of society.

A proper division of work in the field of education among central and various states government is necessary, to standardise our education system, and to help Indians think in a more Indian-centric way by keeping their local cultural and historical heritage intact. The sooner it happens, the better it is for us as a nation.

Also read: The Pressing Need To Shrink The Thick Line Of Divide In Our Education System