India Is Facing A Youth Suicide Crisis. What Do We Know And What Can We Do?

Last week saw people coming together from all walks of life on October 10, World Mental Health Day. The theme for this year was ‘suicide prevention’, which is definitely something that India needs to work on. India has the highest suicide rate in the world for youth between the 15-29 age group. Add to this another angle: the suicide rate among those with more education is higher than those with little or no education. In India, the people with a background of higher education form a minuscule 4.5% of the total population, a majority of whom are the youth, and thus, the highest risk-bearing group.

Globally, the countries that have registered a fall in suicide rates have shown better diagnosis and treatment of mental health. Dola Patel, a Mental Health Practitioner in Georgia, USA, expressed her shock to me over India’s mental illness ‘pandemic’. One way to understand this is, of course, the demography, particularly the size of India’s population.

Most people aren’t able to access mental health services, and the taboo is strong and widespread. “People are afraid to confide even with a doctor that they are suffering from mental illnesses. ‘Who will marry them if the news is to come out that they had been seeking the help of a counselor or psychiatrist?’ is something that many Indian families think of when it comes to a young individual with mental health issues,” she said.

“The brain is simply a part of the body, like the liver or cornea or spine. Just like people have diabetes or high cholesterol, they might have mental health problems too. Talking about them should not indict shame or else, India will continue to have such large numbers of people who are not in the best of their mental health and suffering silently,” Dola reiterated.

However, unlike her colleges and universities in the USA, India does not have a uniform policy that makes it compulsory for educational institutions to keep a trained counselor among its regular staff to address students’ needs.

Although the Indian higher education system is the third-largest in the world, after the US and China. But, the expansion in the number of colleges and universities has not ensured quality education and funding. The floundering Indian economy which is failing to provide employment to the youth with higher education is a source of constant stress for the hopeful young graduates who thought that investing in higher education was a sure-shot ticket to success, stability, and secure life.

Also read: You Should Be Worried About The Ongoing Protests Across TISS Campuses 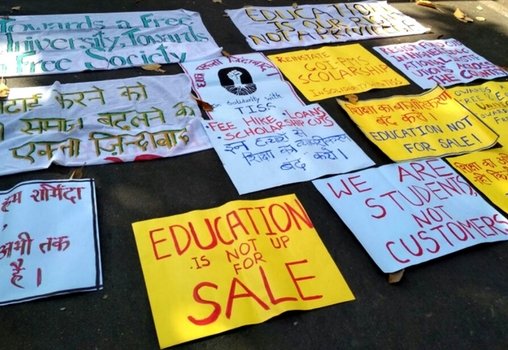 Today, the privatisation of education, arbitrary hikes in tuition fees along with the withdrawal of scholarships have made students feel helpless, if not hostile, and led to protests. Even ‘liberal’ spaces like Tata Institute Of Social Sciences (TISS) had to face the wrath of students who went on strikes in all four of their campuses when financial support to economically weaker students was withdrawn, for some in the middle of their courses!

Sonu (name changed), a Psychology Masters student at TISS-BALM, mentioned that even the off-campus centre in Chennai, whose name itself contains ‘Leadership in Mental Health’, does not have an official mental health counselor. But, the need for one is urgent. “One of the major issues that many students face is ‘alienation’. Most students here are from different parts of the country, struggling every day in a different place, climate, food, and peers. This adjustment to new environments along with the ever-growing work pressure takes a toll on mental health,” she said.

“If they find nobody to talk to, they feel ‘alienated’ and often resort to addictions of all sorts–ranging from online gaming to substance abuse. The uncertainty that the future brings adds a certain ‘meaningless’ to their lives,” Sonu told me, adding that this leaves them “emotionally vulnerable, desperate and restless. Most of them do not have the means to deal with the stress, anxiety, and depression such environments can create. That is why mental health practitioners for students are required.” Sonu went on to add that “For Ph.D. research scholars it’s even a lonelier journey as they do not even have classmates to share their problems or progress with.”

Although many colleges and universities pledge to have an amiable environment and encourage students to share their problems with their teachers, and for teachers to mentor their students, it is not the most ideal arrangement, as counseling needs to be a separate and independent space, where the profiles of a ‘student’ and ‘client’ do not overlap, if they happen to be the same person.

The government also needs to realise and rectify its policies that have financially starved students by reducing their scholarships or not capping fees in private institutions. These policies definitely exacerbate the frustrations of an already stressed Indian youth.

Because of things not in their control, like the government’s interest in the mental health of its scholars, it will end up extinguishing the fire of inquisitiveness in their mind, along with the burdens they already face, like living away from family, peer pressure, feeling isolated, broken relationships, unmet aspirations, an uncertain future, and for just being a young person in India.