NRC: Did A Faulty Execution Defeat The Purpose Of This Exercise?

By Toufik Imrose in Politics

The National Register of Citizens (NRC) has created a horrific situation among the people of Bengal, Assam, and Odisha. The NRC hasn’t come in Bengal yet, but many people fear it—especially the men in Bengal. Moreover, the middle-class families are facing a lot of difficulties due to NRC.

During India’s Partition, many Muslims and Hindus migrated to Pakistan and Bangladesh respectively. Afterwards, some Muslims from Pakistan and Hindus from Bangladesh returned to India. Even now, many Hindus from Bangladesh are coming to India. For the past 10 years, if any foreigner came to India and started any business here and stayed here for 11 years, they got Indian citizenship. But, after the emergence of the Modi government, those 11 years were dropped to only six years. Apparently, the Modi government is only concerned about BJP’s ‘vote bank’—as it will be more than it was before due to the Hindu population. This allows illegal intruders to be Indian citizens. It is reprehensible that the centre is just concerned about its vote bank and not the Indian economy.

The Indian citizens are now facing a great problem of poverty; a substantial part of our population lives in slums. Then how can so many people from another country stay here for a long time to be Indian citizens? In addition to this, the issue of tackling illegal immigration was not addressed either. The Modi government didn’t discuss the consequences if the government was to admit these intruders as Indian citizens. 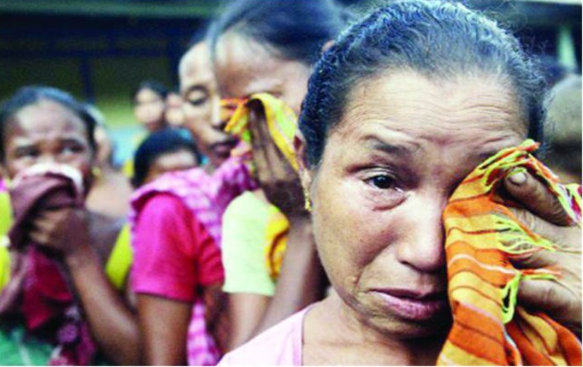 And now, the Indian government has updated the list of Indian citizens in the NRC. Many names are missing from this list. Approximately 1.9 million names were missing from the NRC in Assam. How can this happen? Most of these people have been living in Assam for decades. In spite of this, they didn’t get citizenship; they could not be Indian citizens. The Muslims dwelling here for decades couldn’t be Indian citizens. This is the ‘management’ of NRC. Now, the government has made certain restrictions and conditions to be an Indian citizen. To be an Indian, a person needs to include his name in four lists:

In addition to this, foreigners can be Indian citizen by staying here for six years on the basis of religion. Those religions are namely:

So, only non-Muslims can avail Indian citizenship as per the recent controversial bill.

The government has spent about ₹1,120 crores on this NRC project. This amount was enough to make this project systematic and foolproof. But they seem to be taking actions only after the accident. That’s why the Indian government should be conscientious about these matters.

Now, NRC is about to come in Bengal as well. Many people fear that they could be non-Indians if there is any mistake in their voter IDs or Aadhaar cards. After observing these events, I feel the government is being unfair to Muslims by excluding their names from the list. It seems the government is trying to make India a Hindu nation by expelling Muslims. The Modi government also announced that if any foreigner proves that he is a Hindu, the government is ready to give him citizenship. It seems that India is BJP’s property. Listing the names of citizens is a serious matter. The government should handle this with better care and scrupulosity.