Lessons To Learn From Aarey: We Mustn’t Fall For The ‘Metro Vs Trees’ Argument

One of the most influential philosophers of the twenty-first century, Ludwig Wittgenstein warned us how language can mislead and trap our thoughts. Author Amit Bhaduri relates this with how “We are rendered far too often of this warning when we are dubbed ‘anti-development, ‘romantic environmentalists’ for our proposal for alternative development.”

Recently, in the hearts of Mumbai, hundreds of trees were chopped for the construction of a metro station in a no-development, eco-sensitive zone that is Aarey Forest. This lead to thousands of people marching on the streets to protect their environment while the State of Maharashtra was clearly adamant about the construction being pro-development.

We have been aiming for development since Independence, switching to a fast-track in the recent decades of globalisation, and yet, India remains at the 177th position out of 180 countries in the Environmental Protection Index. Our vast population has no access to potable water and the crisis continues when major cities in the country witnesses intense levels of air pollution that deprive Indians of clean air.

If there is a dire need to protect our Right to Life granted to us under Article 21 in the Indian Constitution, then we probably cannot foresee the Right to Development which ensures a dignified life. But, the need here is that development should be fulfilled in an equitable manner such that both environmental and developmental need of the present and future generations is met. An appropriate methodology should be formulated to restore the environmental values of forests which are unavoidably diverted for other uses.

There is no harm stating the fact that development does disturb ecology and creates some imbalances between the two. The problem becomes acute and disturbing when development takes precedence over fragile eco-systems as witnessed during the felling of trees in the Aarey Forest. But, this conflict can very well be resolved with the right prudence and positive policies, and a harmonious balance can be maintained.

Environment concern at the global level was shown by organising a conference in 1971, in Stockholm. “The U.N. Conference on ‘Human Environment’ as it was called, alerted the nations to the growing threat to the very survival of the human race and civilization as a result of the mindless destructions of the environment.”

Back in India for the purpose of environmental protection, the government of India initiated various steps at different times at the Legislative and Executive levels. Our policy framework consists of constitutional mandates and legislative measures of the central and state governments, and some provisions under Articles 47, 48, 49 refer to the problems and directives to the government. Some of the directive provisions incorporated in the constitution as a result of the forty-second Amendment Act, 1976, includes Acts 48A, 51A. These provisions contain a clear mandate to the state and to the citizen to protect and improve the environment, and therefore, they constitute the basic policy framework for all the legislative and executive programs.

It would be reasonable to assume that the inclusion of environment protection as a fundamental duty was to involve the citizens as partners with the government and its policies. Therefore when one witnesses the imposition of Section 144 when people come to protect their environment, one can call it a violation of the Constitution.

The success of the ‘Chipko Movement‘ clearly asserts the thesis that the best way to protect, conserve, and manage the environment is through people’s participation at the local level. Public participation is a continuous, two-way communication channel where the role of the legislative body is equally pertinent. In recent years, both central, as well as state governments, have enacted laws with specific thrust on control of environmental degradation. 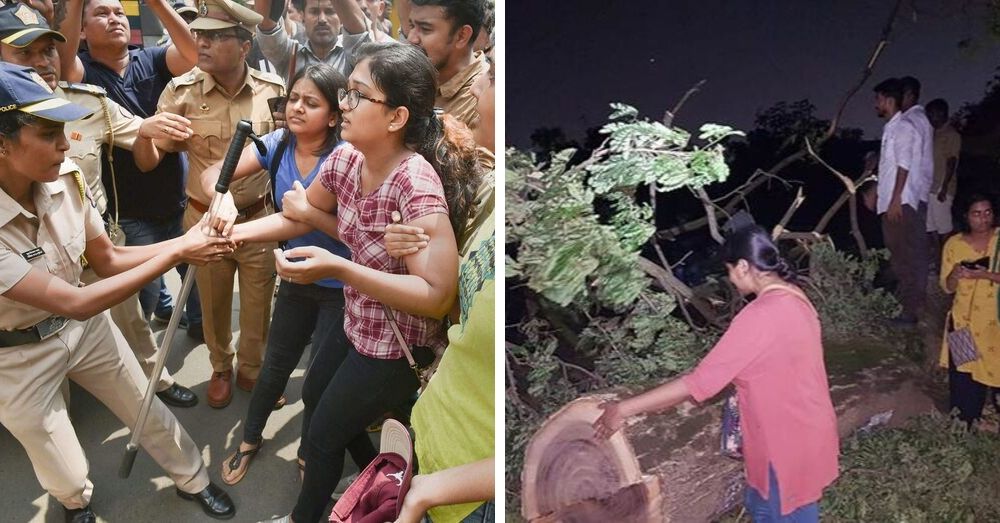 At the same time, we cannot ignore the role of the judiciary in the Aarey Forest case where the Bombay High Court refused to declare Aarey Colony as a forest and rejected the bail plea of 29 activists who had participated in the peaceful vigil against the tree-felling and were detained by the Mumbai Police. Meanwhile, the same judiciary, at the Apex level, accepted the PIL and restrained the authorities from cutting any further trees, but by then, according to news reports, 1,500 trees were already cut.

Before an assessment of the dynamism of the judiciary and its efficacy in the field of environmental pollution control is made, it is essential to understand the relevant contours of the problem and to have a general survey of the policy framework within which courts are to operate. Judiciary is charged with the duty of the interpretation of laws and that too in such cases which are brought before the courts, therefore judicial judgments at best can have only marginal impact on the larger question of environment control or development goals.

This all boils down to the need to understand that seldom can homogeneous decisions be made in terms of environmental protection. It will be mostly influenced by a powerful commercial and business concern. There is a need for an environmental policy keeping in view the country’s development policies. Decisions relating to environmental issues should be taken in a non-political atmosphere and the environmental dimension must be built into all policies, plans, programs, projects, and decisions.

Also read: Does India Have Adequate Policies In Place To Achieve Its Ambitious CO2 Emission Target?

The explanation for the gap between intention and reality lies, to a great extent, in the realms of politics. Pollution control has become a major issue of public policy. The environment and the vulnerable cannot be “sacrificed at the altar of development.” Environmental conflicts are not anti-development in any sense.

Hence, the entire debate, from Twitter to TV shows, on making a choice between trees vs metro stations can be called problematic and as diverting grievances. The time has come to examine every project from an ecological point of view, and where there is a conflict between environment and development, there is a need to decide in favour of the environment. Environmental protection needs to be built into the development process, for the time is ripe for a new ‘eco-beginning‘.