DU Students And Teachers Pay Tribute To The Life And Struggle Of Prof. Geelani

By nishant anand in Campus Watch, Politics
In the context of the on-going brutal siege and military occupation of Kashmir and increasing state repression across the country, around 100 students, teachers and alumni of Delhi University came together, in a powerful and emotional protest gathering to remember and pay tribute to the life and struggle of Prof. Geelani. The gathering was addressed by professors, students, workers and Geelani’s family members. Speakers recalled the witch-hunt of Prof. Geelani, how he was falsely implicated and framed by the state and subjected to unimaginable torture, how successive governments have sought to silence and suppress voices of resistance and dissent – which has only intensified under the current Modi Government.
As his friends, colleagues and comrades, the speakers talked about how disturbed and worried Prof.Geelani was about the situation in Kashmir, stressing that it is important to recognize that his untimely death, his heart attack was a form of institutional murder — a democratic rights activist who was brutalised and humiliated by the full power and impunity of state and police machinery. They paid salute to his incredible work for the release of political prisoners, his courage, his life and resilience in the face of tremendous repression and violence.
Also read: Far From Normal: Kashmir’s Forgotten Students
His students talked about how even in his own college, Zakir Hussain College, he was constantly marginalised and framed as a ‘terrorist’, despite his acquittal by the apex court. Even students and teachers who stood up for him, would be constantly silenced. Prof. Geelani’s daughter and son also addressed the condolence gathering about the struggles faced by the family to live a secure and dignified life, what it was like growing up as children under constant attack and surveillance by the state, the emotional trauma of standing witness to state’s incarceration of their father. They shared fond memories of him as a supportive, courageous and loving father who always taught them to fight for and stand with the truth. 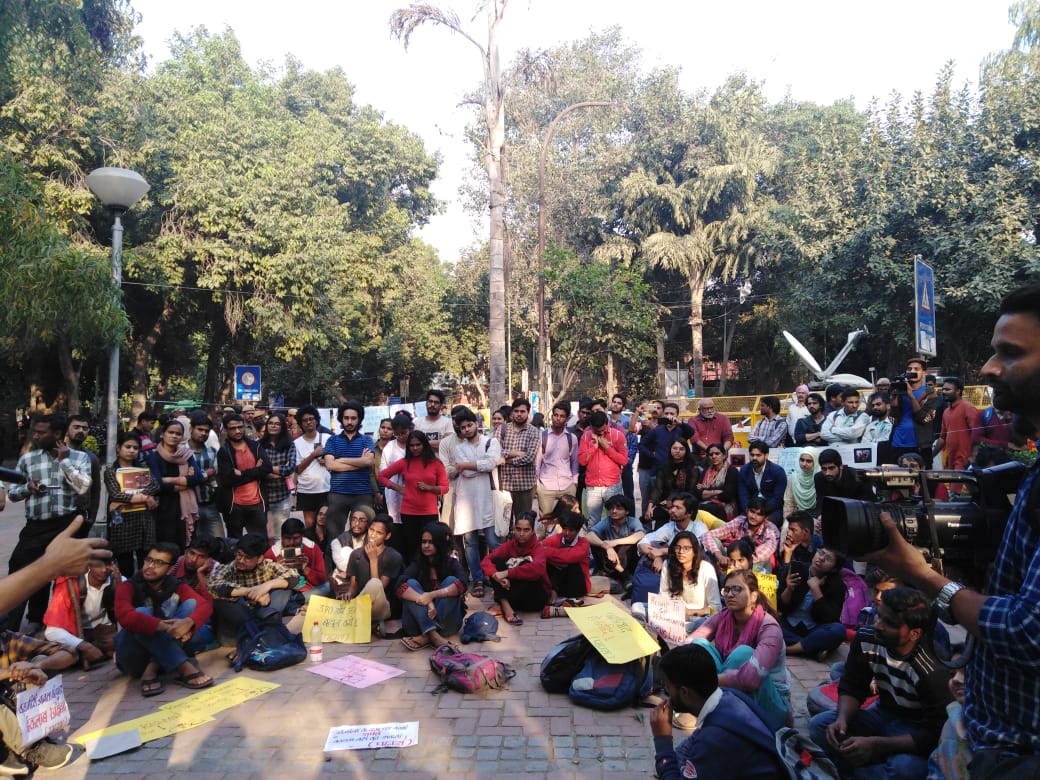 We raised slogans in the memory of Prof. Geelani, in support of the struggle of people of Kashmir and extending solidarity to all those people falsely implicated in cases under various draconian laws like UAPA, NSA, POTA, AFPSA etc., and languishing in jails across the country.
The gathering was also graced with the presence of Zee News who forcefully recorded the whole event, despite repeated requests asking them to leave and  raising slogans of “Godi Media Go Back”, “Dalal Media Go Back” and so on.
The public meeting and condolence meeting was organised by AISA, BsCEM, Collective, Disha, DSU, PACCHAS, PDSU, PINJRA TOD, SFI AND students of Zakir Hussain College.
Here some more pictures from the event: 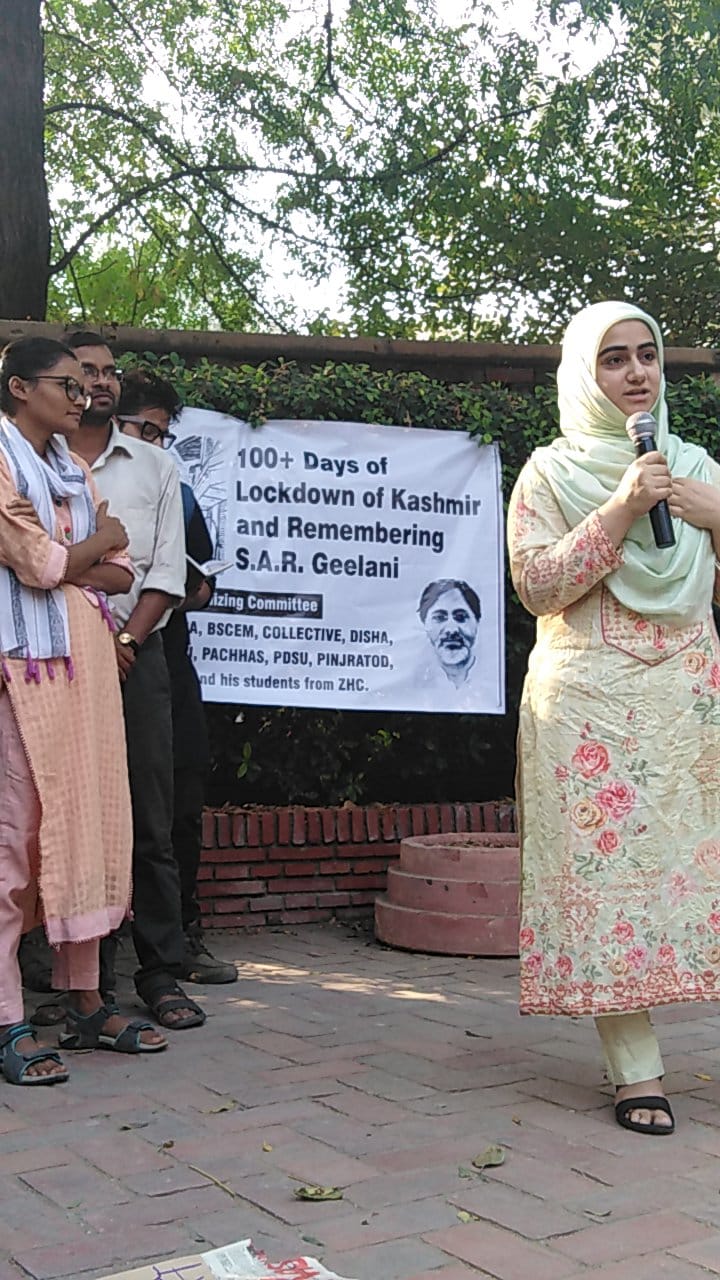 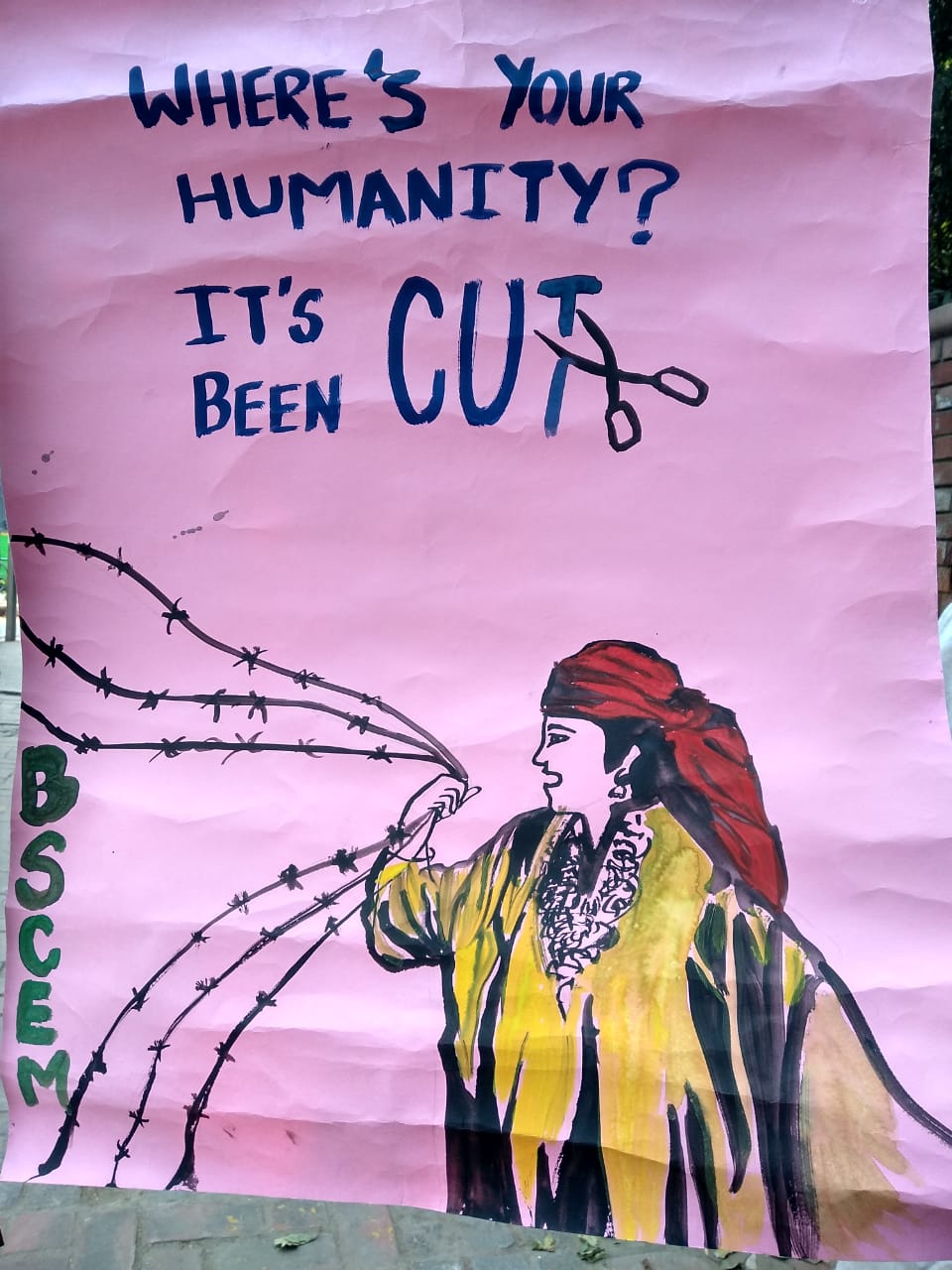 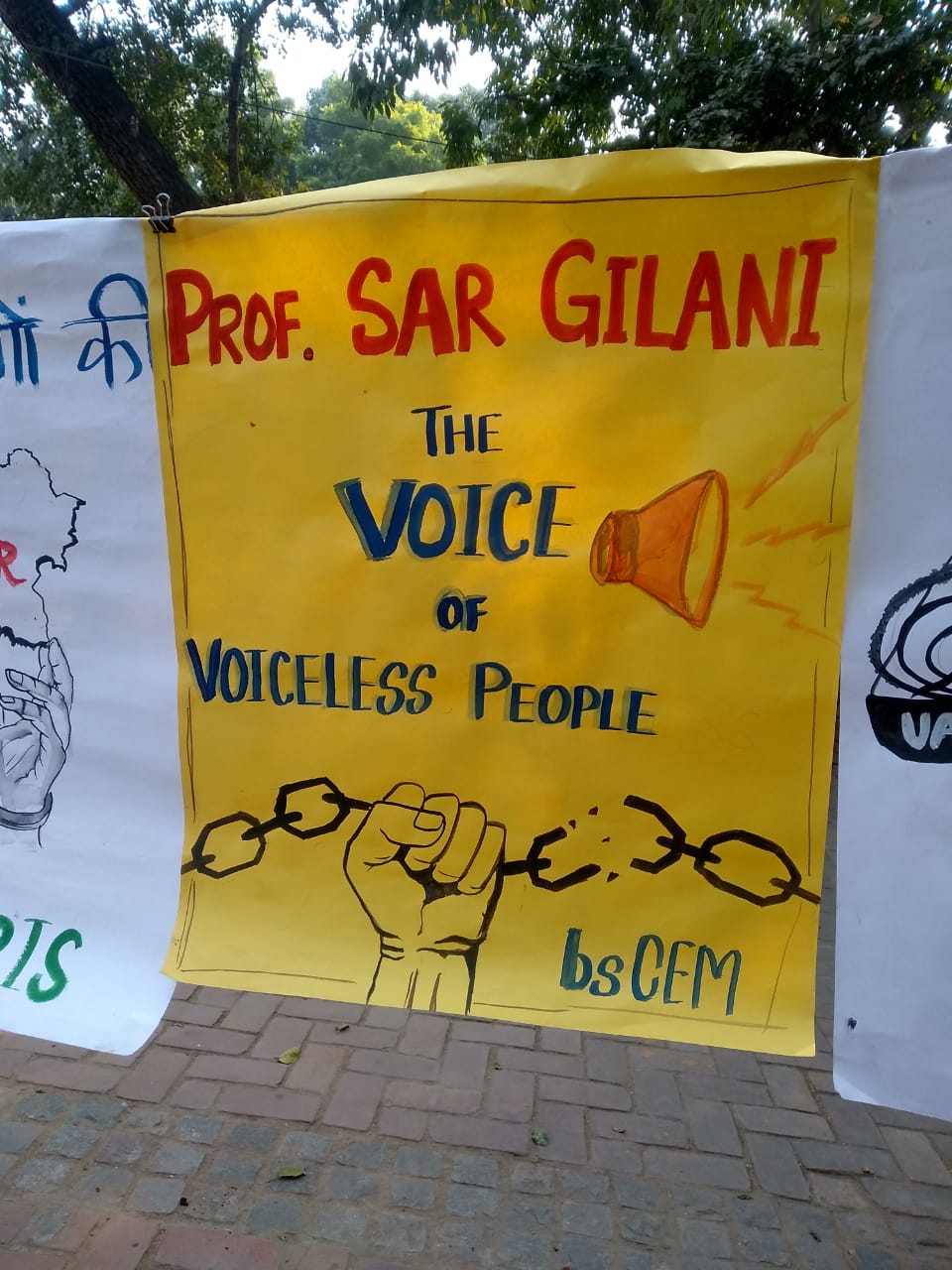