On November 19, 2019, students at IIT-Bombay held a protest against the ‘institutional murder’ of Fathima Latheef, who was a MA first year student at IIT-Madras. The protest was held under the banner title “Justice for Fathima Latheef,” collectively organised by the Ambedkarite Students Collective (ASC), Ambedkar Periyar Phule Study Circle (APPSC) and the North-East Students’ Collective (NESC). All these students bodies are from IIT-Bombay. In lieu of the protest, a statement by the students bodies was released. 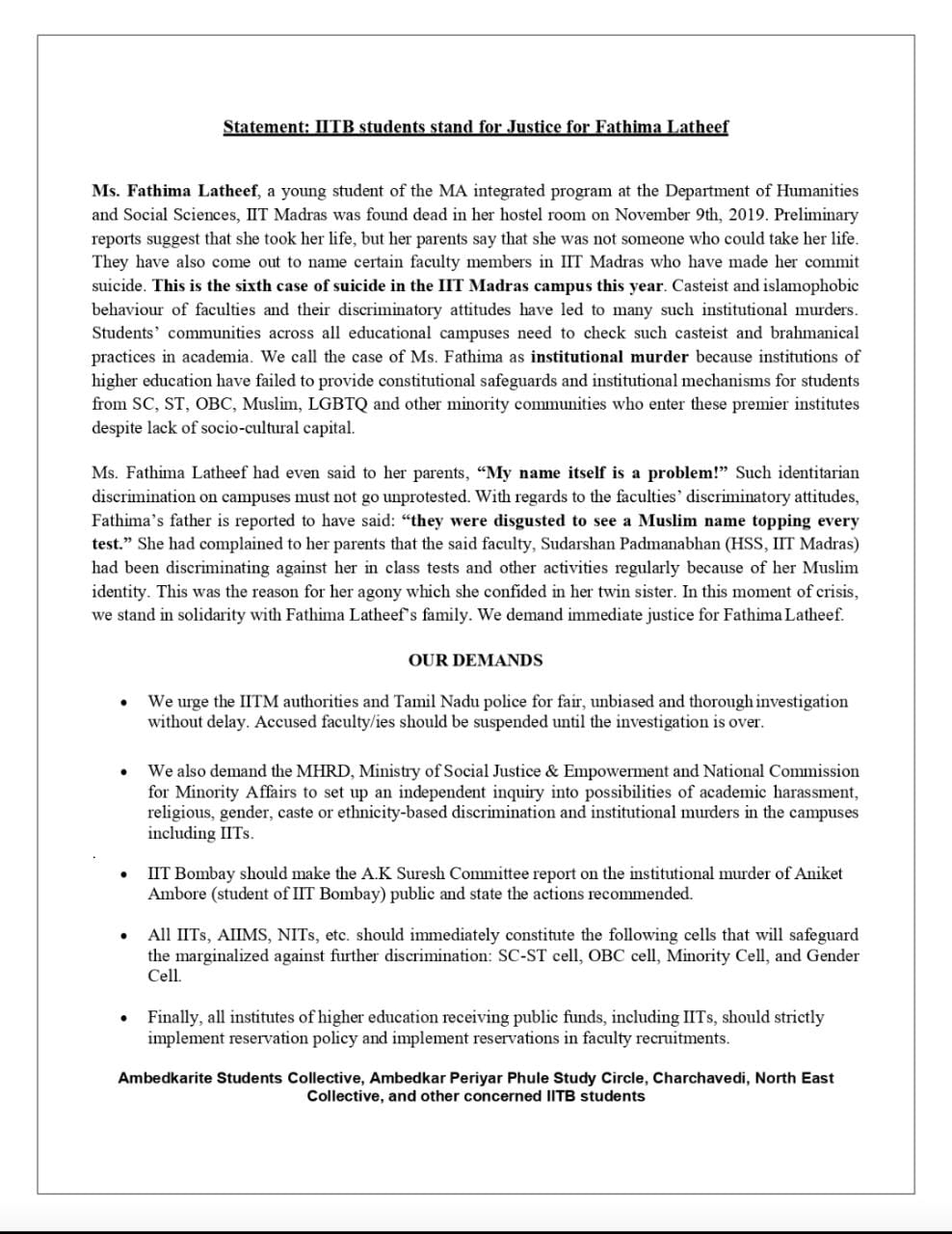 Around 80 students have participated in solidarity with Fathima’s family and other families who have lost their children in institutions of higher education across the country. During the protest, many students shared their experiences of discrimination by their own faculty on the basis of caste, gender and religion.

Premier institutions in India which constitute relatively less social representation from the social groups of women, SC/ST/OBC communities and religious minorities, tend to house a lot of discrimination. This is due to the fact that the institutional faculties belong to certain socio-religious and economic backgrounds.

According to Fathima’s father, she resorted to suicide due to some faculty members of IIT-Madras harassing her on the basis of her religious identity.

This incident, along with others, starting from Rohith Vemula, UoH to J Muthukrishnan, JNU reveals what is really happening in these institutions of national importance. Where deaths are becoming day to day stories of students’ failure, rather than a questionable offence on the account of discrimination by the faculty members. It’s simple: if these higher educational institutions are still reluctant to apply reservation to bring social diversity, then the institutions will lack the mechanism to deal with the issues of discrimination.

Also Read: JNU Fee Hike: The Demand For Free Education Is A Right, Not A ‘Fuss’

If India’s campuses are not going to implement any inclusive social diversity policy and if they cannot accommodate an alternative view from the dominant narrative of IITs/IIMs/NITs/AIIMSs, then it only seems apparent that a mechanism to stop these incidents is deliberately missing.

Are IITs, IIMs and other premier educational institutions in India lack social diversity?