From Gauri Lankesh To Shujaat Bukhari, Our Journalists Continue To Pay A Heavy Price

In a developing nation like India, it is essential to understand the true essence of journalism. New definitions are being formulated and newer laws are being passed to support journalism. However, those in power who do not associate themselves with this field, thus leading to be disastrous to a greater extent.

The importance of journalism can never be denied as it plays a crucial role in the building of a nation. It makes the masses aware of what is happening in their milieu through ethically reporting the incidents which take place every single day. People not only look up to the media channels or the dailies to keep themselves updated but also trust them. Therefore, media organisations should have a high degree of neutrality.

At this age, journalism holds the authority to influence the masses and manipulate their political leanings. It provides people with information which affects the biggest decisions of their lives. From deciding their future to the nation they live in, every decision depends upon the news that they consume daily. Thus, the purpose of journalism is to provide citizens with the information they need to make the best decisions for themselves and the entire nation.

The Plight Of Journalism In Modern India

Gone are the days when authentic news used to be delivered on our screens. Nowadays, authentic news does not even find a column in the newspapers. It may sound disturbing, but reality sometimes is truly bitter. Journalism is not journalism until the journalist doesn’t attain the freedom to pen down their thoughts. India lags far behind in providing its journalists with an independent pen and a space to work fearlessly. Journalists are bound to their media houses, who bow down to these political parties or power-holders.

In recent times, when our Chandrayaan-2 mission failed, a news channel aired a program on how the apparent scenario would be if human existence shall ever commence on the moon with the anchor dressed up in a spacesuit! People who were still holding on to their senses were aghast and did criticise it.

In the recently released 2019 World Press Freedom Index, India scored the 140th position and has dropped two positions down. From death threats and verbal abuse to assassinations, journalists have to confront them all. I feel that the ruling party and power-holders never spare media channels and end up making them their personal exploitative puppets.

Also read: Where Does Press Freedom In India Stand Today?

At this time, it seems like no media channel has the freedom to run neutrally and is obliged to lean towards a political party. The fact is, even today, probably every party owns a media channel that praises them and takes up their stand even on their wrong decisions. Journalists wash their hands-off if they find their conscience alive and try to convey their audience what the actual world looks like.

How Many Have Vanished Until Now?

From Gauri Lankesh to Shujaat Bukhari, many names in-between were assassinated because they chose to live for the country and its citizens. Shujaat Bukhari was a Kashmiri journalist and the founding editor of Rising Kashmir, a Srinagar based newspaper. He was also the president of Abdee Markaz Kamraz, a cultural and literary organisation in Kashmir. He was shot dead outside his office in the Press Enclave area of Srinagar on June 14, 2018, after surviving three previous assassination attempts.

Former Home Minister Rajnath Singh termed the killing as an “act of cowardice“.  When the terrorists were being called the driving force behind this assassination, Pakistani militant group Lashkar-e-Taiba was quoted as having ‘strongly condemned‘ the killing and blaming it on the enmity of Indian agencies towards every individual who is loyal to the freedom movement.

On the other hand, Gauri Lankesh did not witness a ‘dream death‘ with roses by her side. She was an Indian journalist-turned-activist from Bangalore, Karnataka. She worked as an editor in Lankesh Patrike, a Kannada weekly started by her father P. Lankesh, and ran her own weekly magazine called Gauri Lankesh Patrike. She was shot to death outside her residence at Rajarajeshwari Nagar on September 5, 2017. At the time of her death, Gauri was known for being a critic of right-wing Hindu extremism, campaigning for women’s rights and opposing caste-based discrimination.

If you start to jot down the list of journalists who lost their lives just because they were not a part of ‘fake propaganda’ since independence, you would run out of tears. Gauri Lankesh and Shujaat Bukhari were famous and renowned personalities whose killings drew attention but there are many who lose their lives for us and yet, their voices remain unheard. 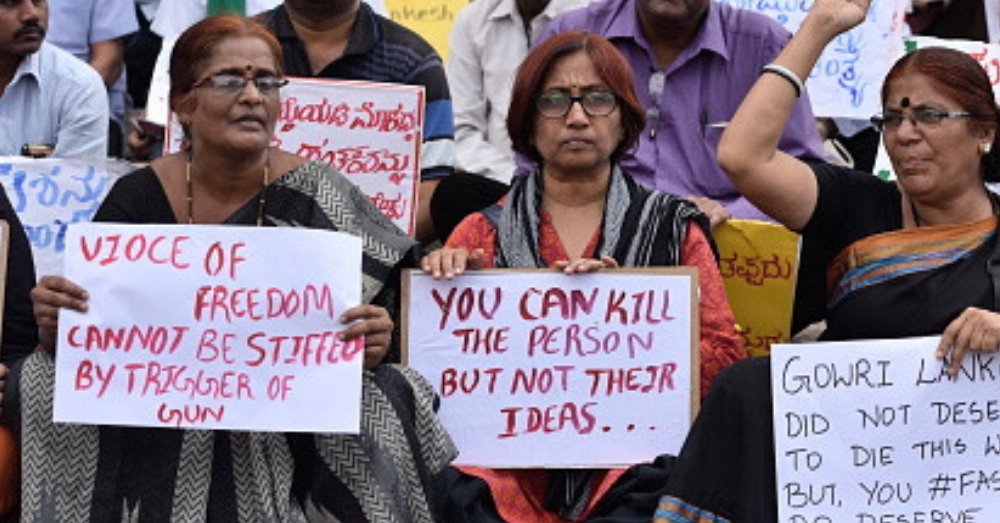 Many questions arise but the only one which we demand to be answered is who should be blamed for such happenings? Who should take the onus, when everyone is busy passing the buck? Was it a planned assassination executed by terrorists or just a blame game to divert our attention by the power holders?

Journalists go through intolerable torture and sometimes end up meeting with death. They work hard to deliver breaking news, many times over a hungry stomach and thirsty throat for people relaxing on couches at home. Aren’t they humans like us?

Also read: On The Question Of Media Ownership: Why It Matters Today More Than Ever