Lenin Raghuvanshi, a Dalit rights activist and initiator of the Neo-Dalit movement will be awarded the Karmaveer Maharatna award, as announced by the International Confederation of NGOs, to celebrate the completion of 10 noble years of Karmaveers making a difference around the world.

At the Karmaveer Maharatna awards,  the committee will felicitate some past award recipients, (1 male and 1 female), from each of the 10 years. The award ceremony is on 26th November 2019, at Ramagya School in Noida. Jeroninio Almeida, the founder and just another volunteer of the International Confederation of NGOs, leadership coach, management consultant, has specifically nominated him for all his continuing noble work.

The Karmaveer Puraskaar award is not just a recognition and reward program but a journey and inspiration that encourages and enables our Karmaveer Puraskaar and Karmaveer Chakra award recipients and REX Karmaveer Global Fellows to bear more responsibility, and keep doing more gracious work, without resting on past laurels.

With that spirit in mind, the Karmveer Award Committee felt they needed to create the highest award to recognize people like him, who are continually ‘being the change’ and hence, award committee conceptualised and created the Karmaveer Maharatna award, which is beinglaunched this year. 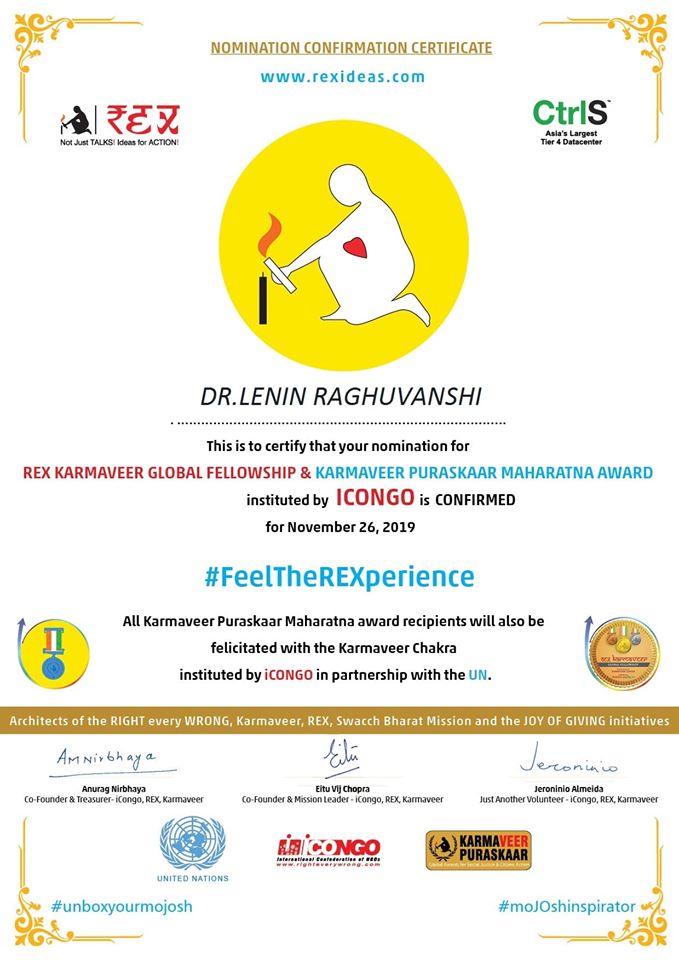 Lenin Raghuvanshi said, “It is an honour of the values of our committed associates and friends working for elimination of caste system and a better world. It is a recognition  of issue of plural democracy and non-violent struggle for the realisation of the spirit of the Indian constitution at the grassroots level.”

He is one of the founders of the Peoples’ Vigilance Committee on Human Rights(PVCHR) and initiator of the Neo-Dalit movement of collective non-violent process of inclusiveness and diversity.