It’s High Time Our Society Buried The Myths Around Menstruation

By Sudipta Mishra in Menstruation

Since time immemorial, menstruation has been considered as a sin, as something dirty, in our society and everywhere around the world. So many taboos are inherently associated with it. In ancient times, particularly in our society, the girls who attained puberty were strictly prohibited from entering the temple and even their own kitchen. The clutches of this so-called social evil never allowed them to breathe freely. They were even  regarded as untouchable. This unbearable pain was tolerated with sealed lips.

The superstitions associated with menstruation were even more painful. In a strictly male-dominated society, women and girls were trained to conceal their fear as well as the stains. Dry leaves, ash, sand, old rags and cotton clothes were the only materials they used during the period. These were the dogmas passed on to them from their elders.

A bucketful of instructions was imposed on them. They were strictly limited from cooking, attending a celebration, etc. They were not even allowed to share a bed with another family member. Certain norms/restrictions were imposed on them regarding bath and sanitation as well. Indispensable sanitary pads were considered as luxury items to purchase. 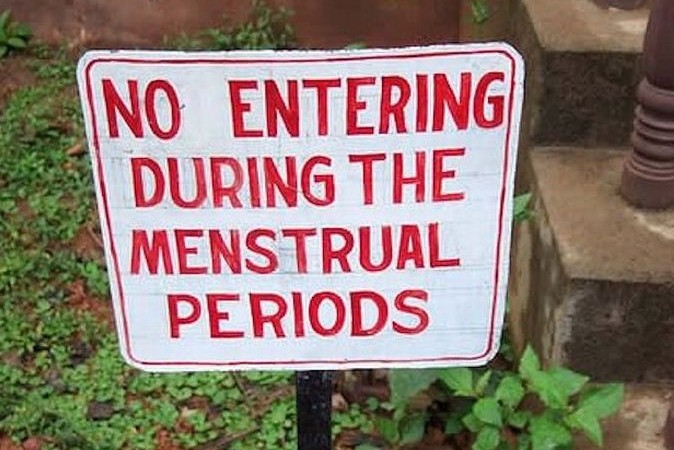 From the beginning, we women are confined within a restrictive boundary. Why? A sense of embarrassment and guilt is associated with periods! Menstruation is a biological process related to reproduction and fertility. Then a family should celebrate it, no? So why should we associate fear and shame with periods? It’s high time we broke this vicious circle. Females should be pampered at the attainment of puberty not shunned. Religious beliefs should not be created as a hurdle in their life. We must break the silence!

The conservative ideology has been continuously choking the women’s voices. Speak up for your sake, women. In rural areas, women and girls at the time of their periods, religiously adopt the cultural myths like not cooking or washing their hair. In urban areas, women still don’t join their family celebration or festivities.

The government has come up with several campaigns to reduce these taboos. Many awareness drives and governmental initiatives are sincerely created at the ground level by volunteers. But this is not enough. Until and unless a self-realisation comes from within, no change can be made at the ground level. Unclean and unhygienic mentalities should be abandoned. A period is not dirty. Instead, it is the gross inequality that has been prevailing since ages which reeks. Hence, a behavioural change and a systematic approach towards broadening the thinking will relieve our society from such problematic beliefs.