Loitering As Resistance: An Interview With Shilpa Phadke For #16DaysOfActivism

By The YP Foundation in Books, Interviews, Women Empowerment

The theme for this year’s #16DaysOfActivism campaign is eliminating gender-based violence in the workplace. By virtue of being a space where people come and interact, it has certain rules and norms, often codified by gender, which, upon transgression out of those norms, can invoke violence. Why Loiter? is a book and movement about reclaiming these spaces, rewriting rules, and enabling access.

For The YP Foundation’s #16DaysOfActivism Campaign, Know Your Body Know Your Rights Campaign Fellow Sanjeevani sat down with Shilpa Phadke, author of Why Loiter?, to talk about her activism. A full transcript of the interview can be read below. 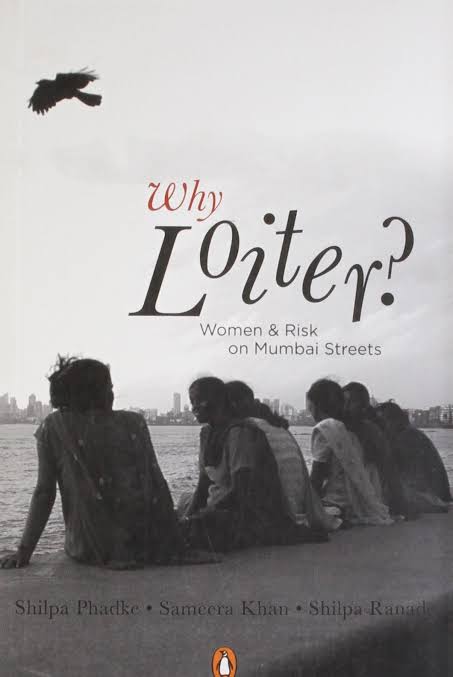 Sanjeevani Chanana (SC): You have worked extensively on accessibility to urban spaces, safety and structural violence. How do you think the present consumerist society is structured to perpetrate violence against women?

Shilpa Phadke (SP): The way late-capitalism functions is that it seems to suggest that we might find freedom in consumption. That’s how advertising works too, it makes us feel that we’ll have a better life if we buy a particular product. That is how it co-opts feminism too; it presents the narrative that through this one will have more equality, one will get a job, or as the overused term goes, one will be more ’empowered.’

Especially in contemporary times, we find ourselves in the middle of authoritarian, passionate, right wing politics where everything seems to be closing, and in this state, the market seemingly offers a bigger, better option. It offers a way using which people wouldn’t ask questions, won’t call for structural changes. It seems to suggest that it offers happiness.

However, there has been academic research on how the search for happiness is not a universal one. This is also related to the idea of the kill-joy feminist; the feminist who asks difficult questions, questions that make people uncomfortable. Through this they tie the idea of happiness to consumption.

However, it only offers a mirage of happiness, no structural change whatsoever. It has no discussion around the glass ceiling, it doesn’t have room for discussion around equal pay, women doing triple shifts (also along the lines of aesthetic labour).

Consumption suggests that one does not need public space now that it has provided alternatives to it. These however, are tied to spending money, and hence limit access only to a certain class of women. It also takes away any responsibility and accountability from the state to provide and maintain public spaces. It offers conditional spaces, but has no room for real freedom.

SC: ‘Why Loiter?’ was a quantum leap of perspective for me. Earlier, I felt my existence mattered only as long as it was significant and impactful. But this book made me realize that I had the right to take space just because I could. I am curious to know when and how this idea came up in your mind- of women taking up space for no other reason but because they had the right to loiter.

SP: It was a collective journey of the three of us (authors Shilpa Phadke, Shilpa Ranade and Sameera Khan) but it was not just that, it was also the journey of all the people we met during our research. We started with a question that who had access to public space.

While we were researching, we were asked why we were studying Bombay for this, as women in Bombay already had a lot of access. So we decided to use that as a benchmark, that if this was the standard of access women had, then what is this standard. We then started thinking about how could women get more access to these spaces, and a lot of our answers were embedded in infrastructure.

Things like street lights, public transport, public toilets, made a difference to the access women had. On an ideological level, we observed, that what was inhibiting women’s access weren’t concerns about safety, but about reputation. Safety wasn’t the concern, as stats have time and again proved that most crimes against women happen within their own homes and by people known to them.

The idea is not about violence, but ‘who’ causes this violence; it’s the fear of a stranger attacking the woman, and also, about them forming consenting relationships. This took us to the idea of conditional safety, which further took us to the concept of ‘risk’ and who was allowed to take risks. It is the right to risk that women don’t have.

We came to the idea of loitering by challenging questions of safety and moving to questions of risk, and we came to a direction of how everyone having access is the only way women could have access. We also them moved to laws around loitering, one of them was along the lines that anyone who was outside post sunset and before sunrise and seemed suspicious could be arrested without a warrant.So we then, tried to rehabilitate the idea of loitering, and challenging ideas of being outside homes.

SC: You mention the 1992 communal riots in the initial pages of the book. How do you think communalism has transformed in the light of recent events? How do you think women, in particular, become a victim of this?

SP: 1992-93 changed Bombay completely. We were living in a sort of illusion of secularism and cosmopolitanism, but that was shattered forever. So naturally, that reality made way into our research too.

And in recent times, things have only gotten worse. Now, this communalism causes communities to further close their doors for women. In the last few years, we have also seen this fallacious, fake narrative of ‘love jihad‘ which has been used to restrict women further and this idea that there is some sort of a battle going on which is completely false. Nobody has been able to prove even a single case of love jihad. The control over women and the desire to control women’s sexuality is just furthered.

SC: One of the chapters of the books is titled the ‘The Unbelongers.’ Could you please walk us through the etymology of it, and explain where we can place this word in the current context?

SP: We started thinking about who belongs, and while thinking about who belongs, we formed an image, which was of a middle to upper class, cis, Hindu, able-bodied male. But we also realised that this male who was often viewed as an insider to public spaces hardly ever accessed them. They were usually within the comfort of their air conditioned cars.

That brought us to another question, that if they belonged then who didn’t, and that’s when we realised, there was also a group of people who were the ‘unbelongers.’ It mostly focuses on the poor, and how in that context, neo-capitalism shifted the idea of poor being poor not because the state could not provide for them to them being poor because they could not take care of themselves.

>We then saw how women were pitted against lower class men as it was viewed as these men were a threat to women’s safety. As of now, the state is trying to define a particular community as the unbelongers today. With the citizenship bill and the NRC, the state is implementing their idea, and through this, the other unbelongers, who are not belongers but are less of unbelongers are made to feel like they belong, so that they don’t ask questions of how they are excluded on other metrics.

It limits marginalisation to communal tension so that others outside of that community don’t ask questions about how other aspects of their identity, be it their gender, sexuality, economic status, make them marginalised.

SC: Alongside loitering to reclaim public spaces, what do you think would be an ideal parallel for women to reclaim workplaces, not just as the workforce of the capitalist system, but as individuals with rights?

SP: The major changes we need are structural. Putting the burden on women to change their behaviour has always been subject to criticism. One thing that has changed considerably in workplaces is how they treat sexual harassment nowadays.

In the wake of #MeToo, a lot of companies have set up sexual harassment committees to address these issues. Now, if a woman says that she has been sexually harassed, she will not end up losing her job, which was the case even until about 15 years ago where women did not complain because it was certain that she would lose her job.

We need better laws, and we need to constantly ask questions about representation and provision of infrastructure for women. Other than that, a possibility of things changing is that a few women who make it to higher levels, should mentor other women and pave a way forward.