India is still trying to find its voice while standing in the middle of a ‘red’ revolution. Even as the media explodes with narratives, pictures, and discourse on menstruation, India still remains a country where this conversation, whether in the open or among co-eds, is still very much taboo. Keeping this in mind, one can only imagine how much harder it is to carry out the ‘practical’ discourse on menstrual waste disposal.

Despite this, certain endeavours have made a breakaway in uncharted paths to menstrual mindfulness. Recently, Pune and Bangalore became the first cities in India to segregate menstrual waste during routine garbage collection. Pune’s SWaCH (Solid Waste Collection and Handling) handles an estimate of 20,000 used diapers and sanitary pads daily. The waste collectors had to go through the punishing task of segregating these from dry waste, often with bare hands. The smell of these bodily wastes along with flies and bacteria left the collectors exposed to many diseases along with a deep sense of humiliation for having to do this for a living.

Kagad Kach Patra Kastakari Panchayat (KKPKP), a trade union of waste pickers with the Pune Municipal Corporation came up with the Red Dot Campaign to address this dilemma. The drive requires such waste to be put in a separate bag with a red dot on it, which the collectors would deposit in a different red pick-up cart, headed for the incinerators installed at disposal booths. Malati Gadkil, head of the campaign, noted that slowly, more and more citizens are being careful while disposing of menstrual and fecal waste.

Bruhat Bengaluru Mahanag Palike (BBMP) is on the same track. But residents are proving that mere legislation is not enough till penalties are also put in place. To show that they mean business, the BBMP fined residents who did not segregate dry, wet, and sanitary waste.

The campaign aims to arrest reckless sanitary waste disposal and also to get sanitary makers to be more accountable. Unlike food, these products do not have to mention the ingredients of production. It is only left to our imagination to figure how much plastic a pad or a tampon contains.

A small village in Uttar Pradesh, Papna Mau has devised a low-cost incinerator made of an earthen compost pot that is lined with leaves. Every residence in the village has one where women of the house dispose of used sanitary pads and then burn it with oil, once it is filled. Just when this small scale incineration was starting to leave an impression, the waste woes of ineffective combustion and further disposal of the ashes pop up as a cause of concern.

Menstrual cups and reusable pads made out of layers of cloth are coming up as the green alternatives in answer to the non-compostable sanitary pads or lack of incinerators in many places. There is a dire need for compostable products along with clear directions in the packaging on how to decompose it.

While the availability and cost of menstrual cups are a challenge, cloth pads are battling the basic problem of hygiene. In a culture that shuns menstruating women and associated products to seclusion, many women cannot even dry their cloth pads out in the sun fearing social stigma. This leads to many women being affected by bacterial and fungal infections, urinary and reproductive tract infections, Hepatitis B, and even infertility. 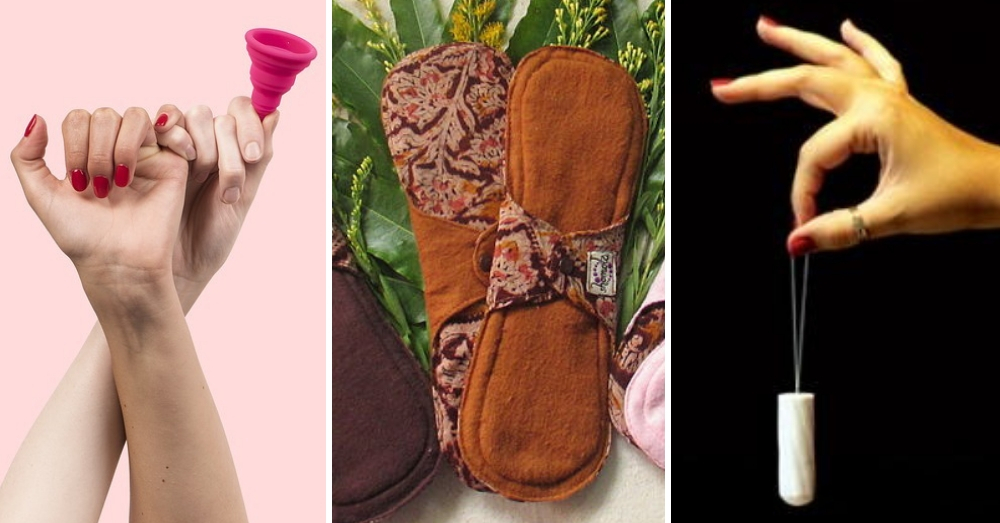 However, until menstruation does not become a part of the mainstream conversation there is very little one can do to normalise the disposal of menstrual waste. The chatter on menstruation has grown louder with popular movements in the media rolling out campaigns, advertisements, tweets, and movies.

Films like Padman have pushed the agenda to the center-stage and has inspired many people to break the silence and stigma on menstruation. I remember being part of a CSR initiative, right after the release of Padman, which sought to distribute free sanitary napkins among the flood-affected women in Assam. While I coordinated relief distribution measures on the ground, I vividly remember the skepticism of people in accepting these pads. “You will give one packet and go away…but what will I do when she asks for another and I can’t get one for her? You are only spoiling her habits,” rebuked one of the men.

“It is a nice gift but where will we throw these after use?” said one of the women, nodding her head towards the flooded plains around her. This logic beats the reason behind randomly distributing sanitary napkins in disaster-affected areas where organised ways of solid waste management could very possibly be suspended.

Along with a greater need to break the silence in order to make a green switch, there must also be robust political will that backs pioneering environmental legislation on the safe disposal of menstrual waste. Along with popular media, other stakeholders like educational institutions, political commitments, sanitary product makers, and solid waste management bodies need to move cohesively together or else menstrual waste will find a way to potentially keep polluting soil, air, and water.