Stubble Burning May Be Part Of The Pollution Problem: But Why Ignore Other Causes?

By Sneha Pande in #WhyOnEarth, Environment

That which doesn’t kill you only makes you stronger cannot be said about the growing amount of pollution in the Northern part of India. The statistics paint a rather gory image of what we inhale now. While I write this article and breathe simultaneously, I might have already been subjected to smoke equivalent to smoking a cigarette.

While the capital faces the wrath of burning incidents taking place elsewhere, it is hard to believe that the hue and cry rest only on one factor. Geographically speaking, when the surrounding air is cold, and the atmosphere is already contaminated with PM, then the site of smog is a common phenomenon. And that is the exact reason why we’re unable to see clearly with our naked eyes, both literally and metaphorically. The problem of stubble burning is huge but is NOT the single problem creator.

Also read: It Is Unfair To Blame Farmers As India’s Grain Bowl Continues To Choke

Public transport already runs on CNG, but can we put an overnight ban on private cars that use petrol and diesel, without providing a clear alternative? Can we just forget about justice here? No! What purpose does it serve to put an overnight ban on the stubble burning of the farmers, without providing them with an alternative? Especially now, when its already time to prepare those fields for the Rabi season. Are we prepared to face the wrath, in case the crops don’t have the expected yield, and India being an agricultural economy, suffers?

Aren’t we the same people who use air conditioners, spray deodorants, light incense sticks, use non-biodegradable sanitary napkins, burn the trash which we should have otherwise disposed of at a safer dumping ground? We celebrate Ganesh Chaturthi with much furore and despite knowing how pollution is already spreading, still, immerse the idols made of POP in the water bodies. We use the train’s washroom while it is still standing at the platform, and then close our noses when we get a foul smell in and around the station.

Well, to say the least, we are not just hypocrites, but also, the idea of our ideal development is pretty underdeveloped.

The dais has been with Delhi for quite some time now; it’s time we make a shift and turn our heads to other small, yet significant cities, where the recorded levels of AQI as per the CPCB has been even higher than what was witnessed in Delhi.

Majorly, we need to understand, that it isn’t a competition, where we should be competing for “Who’s got the higher AQI?”. Rather, we should devise ways of curbing the menace of pollution, irrelevant if it’s land, air, water or light. Pollution is pollution and its causing harm to us, and to our future generation, through us. 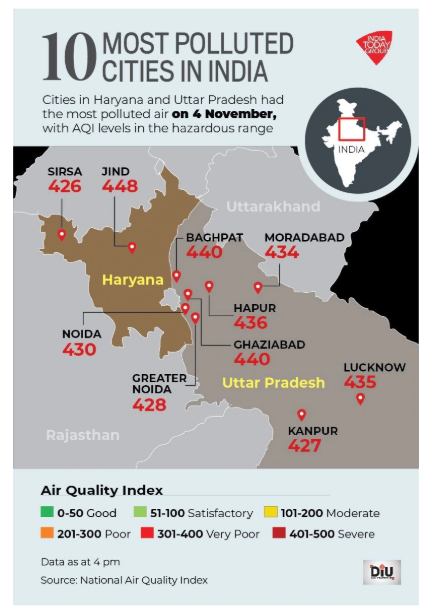 In 1986, Chernobyl was termed a disaster, because catastrophic changes were witnessed, and history has already painted a rather gloomy image of what happened in Hiroshima and Nagasaki. In 1984, the Bhopal Gas tragedy had no parallel in the world’s industrial history. Today, though we don’t have a specific name to address it, we can sure see the inordinate effects of the same. Pollution is not a monthly problem; it is long-lived, it grows with us.

Stubble burning is only a catalyst that has aggravated it, and that needs to be addressed, but that is not just the only activity which needs to be addressed. We need to come together, come up with solutions for the year, and not just a season or a month. Do you think smog is the only problem? Don’t you think rising temperatures, extreme winds that cause dust and dander, extreme floods, and droughts also need to be addressed? What about the contamination of water that entire the NCR region supplies in its pipeline, and is often used for bathing and cooking purposes, the tarnished Taj Mahal, the spoiled Ganga water, and Yamuna river, which was once a holy river and is now just a drain? And can we ignore the staggering amount of traffic on the roads every day, and the continuous blaring of horns in and around all cities, mass extinction of species and forest fires? These aren’t a problem?

We all sure can be ‘Alice in Wonderland’, but we know what happened to Alice, she fell for a lie and landed herself in trouble.

I quote Sunderland Bahuguna, “The solution of present-day problems lies in the re-establishment of a harmonious relationship between man and nature. To keep this relationship permanent, we will have to digest the definition of real development: development is synonymous with culture. When we sublimate nature in a way that we achieve peace, happiness, prosperity and, ultimately, fulfilment along with satisfying our basic needs, we march towards culture.”