Post-election Analysis: Why Maharashtra May Not Get A Stable Government

Just a day before voting, my article, ‘Maharashtra Assembly Election: Is everything Alright Between BJP And Shiv Sena?’, was published on this platform. I have pointed out there that despite pre-poll opinion survey predictions and BJP contesting in more seats (152 seats), I had an apprehension that something is not right. Although BJP presented Devendra Fadnavish as the face for CM, Shiv Sena’s posturing and comments created doubts in my mind that the alliance may not achieve a good result.

I was apprehensive that BJP and Shiv Sena have different and contrary aspirations, and a game of sabotage might take place among the allies. Many of my reader friends dismissed my worry claiming that BJP alone will get the majority. However, the election result proved that my doubts were genuine. BJP lost 17 seats whereas Shiv Sena lost seven seats, although the alliance got the majority (162 seats adding RSP’s one seat). Below is a portion of the above article, which proves that I was bang on in my analysis:

“But then the question arises: even if the result is in favour of the BJP-Shiv Sena alliance, will the coalition last? There could be three scenarios.

First, the BJP alone gets the majority. After some months, the Shiv Sena will prefer to sit in opposition, because the BJP getting majority alone also means Congress-NCP are to be decimated. Thus, Shiv Sena will aspire to take the non-BJP space in the state to make itself credible.

In the second scenario, BJP-Shiv Sena gets a majority, but the BJP alone is short of a majority. I won’t be surprised if there is a Shiv Sena CM supported by the Congress and NCP from the outside. The excuse for the NCP-Congress would be the Shiv Sena’s change of heart, thus stopping the BJP from getting absolute power.

The third scenario is, because of mutual sabotaging, the Congress-NCP returns to power. In Indian polity, strange things happen frequently. The Congress’ return in Chhattisgarh and the BJP winning Tripura and Haryana assembly without any base in previous elections are apt examples.”

The first scenario was as per the pre-poll opinion, which didn’t happen. The third scenario was predicted by me if there would be large-scale sabotage by Shiv Sena to BJP and vice versa. That perhaps didn’t happen or if it happened maybe in small scale which requires an extensive seat by seat analysis. But then, the second scenario is matching with the true election result. I have categorically mentioned that ‘I won’t be surprised if there is a Shiv Sena CM supported by the Congress and NCP from the outside’.

Aren’t things moving in that direction? What will really happen now is difficult to say! However, we can analyse the pros and cons if there’s a Shiv Sena-NCP-Congress alliance. Also, we can analyse if finally there’s an NDA government, how stable it will be? But in this article, I will focus on why Shiv Sena is behaving like this, and why both Shiv Sena and BJP may not compromise so easily. In one line I can say that it’s survival stake for Shiv Sena and a case for not leaving the gained ground for BJP. How? Read on.

The readers can refer to my article, ‘Maharashtra Assembly Election 2019: Will BJP And Shiv Sena Compromise?’ published on this platform some five months ago. I have clearly given the alliance history, vote shares, seats won in every election since 1990. In this article, I will present the main reason of worry for Shiv Sena and why BJP is not ready to compromise on the CM seat. The only thing we will discuss here is the strike rate of BJP and Shiv Sena. The following table may be referred to for the same: 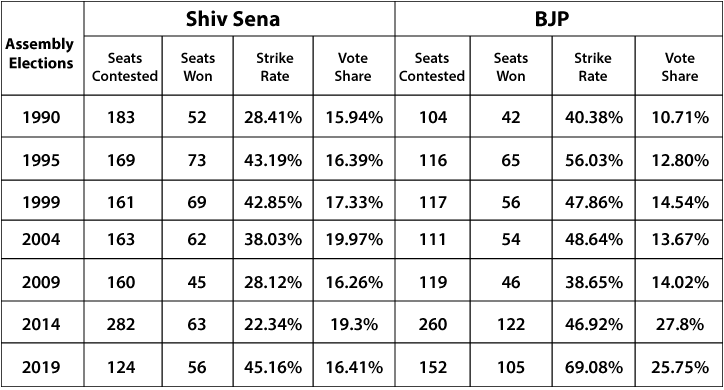 The above table shows whether BJP is a minor ally or major ally; its strike rate has always been better than Shiv Sena. Shiv Sena started losing its footprint since the 2009 election because of defection by Raj Thackeray. In 2009 assembly election, MNS led by Raj Thackeray not only won 13 seats, but it also took away 5.71% vote share. Many experts opine that had there been no defection in the Shiv Sena, then NDA would have won 2009 assembly election although MNS hurt Congress, NCP, and BJP too.

In 2014, BJP, although initially asked to contest in 144 seats, later reduced its demand to 130 seats while Shiv Sena offered them 119 seats. The stalemate continued, and finally, the alliance broke. The 2014 assembly election proved that Shiv Sena is losing ground (19.3% vote share), while BJP is an emerging player with 27.8% vote share. Shiv Sena later joined the BJP government.

For 2019, BJP was aware that this time Congress and NCP would contest as alliance unlike in 2014 when both NCP and Congress contested separately. It’s also a fact that both Congress and NCP combined had a 35.2% (18+17.2) vote share in 2014, in its worst performance. Thus, if there will be no alliance between BJP and Shiv Sena, then a 27.8% vote share or less could surely result in Congress-NCP’s win in the election. Shiv Sena, too, realized that if it contested without alliance, then it will be decimated. That’s why they agreed with lesser seat distribution (124 seats). The result of 2019 assembly election shows that BJP and Shiv Sena both are losing vote shares as well as seats.

Shiv Sena thought this is their final chance to demand the CM seat for Shiv Sena on the rotational basis based on 50:50 formula. On the other hand, Devendra Fadnavish claims the seat on the basis of BJP’s strike rate (BPP – 69.08%, Shiv Sena – 45.16%), making the party the big brother. Hence the CM post is non-negotiable.

It’s really difficult to say what will be the future of the Maharashtra government. Whether BJP will be able to bring Shiv Sena back or Shiv Sena will form a government with the support of Congress and NCP—only time will tell. But whichever combination forms a government in Maharashtra, I am sure that the government won’t be a stable one.

Also read: Why Aren’t We Talking About The Farm Widows Of Maharashtra?