The Wounds Of Blessings: Temple Artform In Kerala Goes Wild

Kasaragod, Kerala: It was a festive time in the Theruvoothu, Moovalam Kuzhi temple. Devotees, including women and children, gathered in large numbers to witness ‘Theyyam’ in all its vibrant colours and spirited settings. As it all ended, most of them who thought of going back with blessings had to go back with cuts and wounds.

Theyyam, which means ‘God’, is a combination of ritual, theatrical and lived culture of the northern parts of Kerala. The role is usually played by artists who represent a hero with great power. Recently, this temple art form, which is performed in one of the temples of the northernmost district of Kerala took a violent turn. Even though the artists tend to intimidate the crowd at times, the recent act held at Kanhangad near Kasaragod crossed all limits. 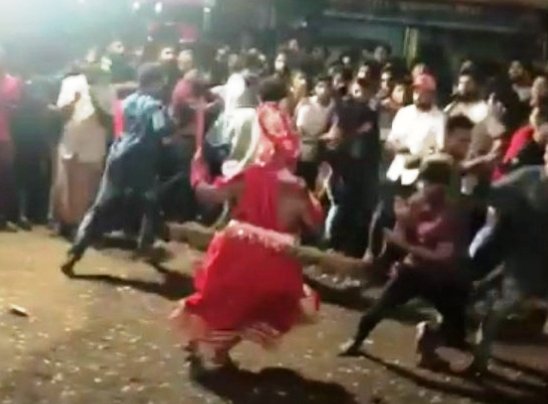 The Chamundi Theyyam is considered as ‘Rudra’ or the personification of terror. It was literally a state of terror when the ‘Theyyam’ started beating up devotees by running after them. Even though people ran to all corners to escape the red-hot stick of Theyyam, some of them fell before it and were beaten up until the crowd helped them out. Most of the people injured themselves while running to save their lives. The children also received the ‘blessings’ of this form by the Theyyam, without any mercy. As per the witnesses, many were badly injured and taken to the hospital for primary treatment. Even though the act seems grossly inhuman, the devotees are okay with it, in fact, they consider it as direct blessings from God.

“Those who got beaten up don’t have any complaints. It’s common here. People know about this Theyyam, and getting beaten up is eventually fun for them. That’s why they tease the Theyyam,” said the executant, Vineeth Panikkar in an interview given to a local channel.

The video went viral on social media resulting in plenty of ‘for’ and ‘against’ responses from across the state. Many activists and the general public came up with a stand that the act of Theyyam is a clear violation of the basic human rights of the devotees.

Also read: India May Soon Reach Its Renewable Energy Targets. But Is It Enough?
Similar Posts
Trending Post ›
We Might Be Diluting The Anti-Racism Movement By Confusing Racism With Colourism

Bijasmita in Racism
July 9, 2020
250
India drafting law to increase nuptial age of girls- the need of the hour