Why Is Amazon Fine With Selling ‘Fake Blood’ Pills To Women For Proving Their Virginity?

By Rahul Kapoor in News, Sexism And Patriarchy, Society

Impact: After reading this article on Twitter, e-commerce portal, Amazon removed the objectionable products from its site.

One of the biggest myths around a woman’s virginity, which finds a place in the sexist and misogynistic conversations of many in a patriarchal society like India, is that if a woman does not bleed on the first night of her marriage during sexual intercourse, then she is not a virgin. This bleeding of a woman is seen as a sign of her virginity and if she does not bleed then the repercussions for her are many, including divorce or even worse, a lifetime of character shaming and violence at the hands of her husband and in-laws.

The myth is absolutely ill-informed, as bleeding during sexual intercourse has nothing to do with the virginity of a woman. The bleeding is associated with the breaking of the hymen, which can occur at any stage of her life due to physical exertion, sickness, using menstrual cups or being active in any sport. In fact, in all practical possibility, more often than not, the hymen of a woman will not remain intact till her wedding night.

Therefore, whenever such a sexist and misogynistic thought process is reinforced by any means, I feel the need for calling it out publicly and standing against it. Currently, Amazon is doing the same by selling pills on its platform which a woman can insert in her vagina on the first night of her marriage so that she bleeds and the male patriarchal ego of her husband is satisfied. He gets the certificate of ownership of her body.

Not one but multiple sellers are selling this fake blood virginity pill on Amazon, and the platform is okay with it, which it should not be clearly! The names of such sellers are I virgin and virginia care. 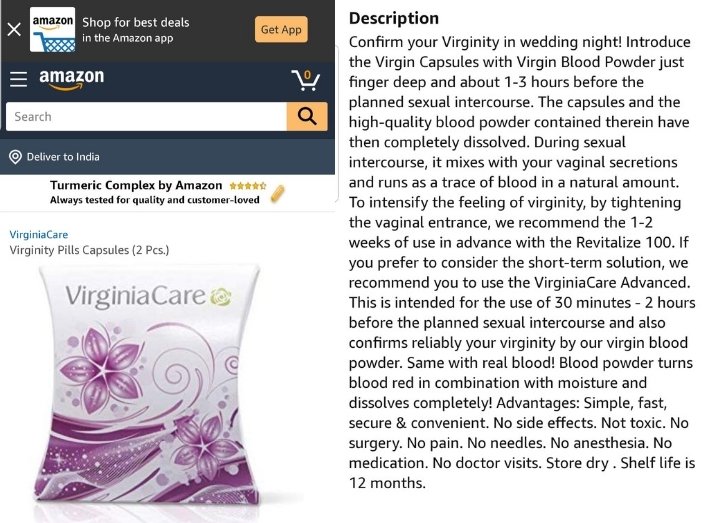 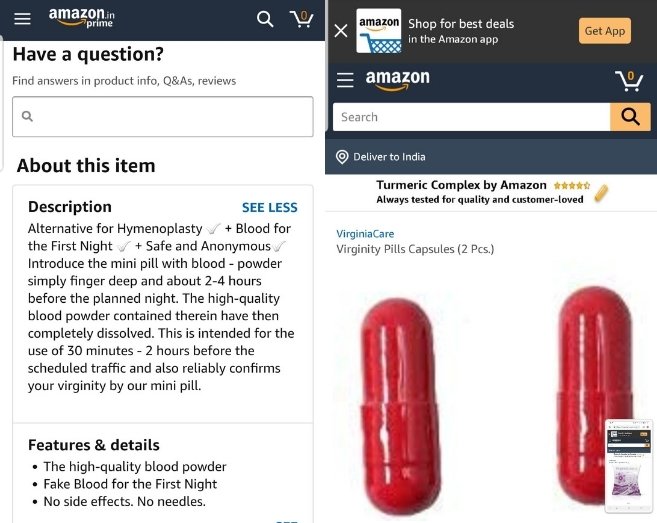 These are some of the sellers who came to my notice, but with such a product selling shamelessly on Amazon, it becomes imperative for the company to investigate other products and sellers who want to cash in on the patriarchal mindset of society and reinforce such sexist and misogynistic notions. I request all the readers to tweet this article to the official Twitter handle of Amazon and call them out  to remove such products from their platform. A little awareness and responsibility on the part of Amazon and other e-commerce websites, where such a product might be selling, would help this world become a better place.

Also read: How This Young Girl’s Fight Against Child Marriage Inspired Other Girls In Her Village