Yesterday, at Jantar Mantar, New Delhi, a group of trans* (the asterisk ensures that this includes everyone except cis-gender persons) and queer people and their allies assembled to register protests against getting the Transgender Persons (Protection of Rights) Bill passed in the Rajya Sabha.

And it’s during the protest it was decided that we’re going to take on Twitter and leverage the power of social media to raise our voices against the fascist regime—that’s taking on every marginalized community one by one and is trying to suppress everyone—by using #StopTransBill2019.

Why Everyone Is Against The Bill

Ray, a trans woman, in her extremely articulate speech at Jantar Mantar, described why the Bill is problematic, she said:

During the event, pamphlets were distributed by Akhil Katyal, Delhi-based poet and writer, and Vikramaditya Sahai also spoke of the “fabulous” and “gorgeous” trans people who will not give up and continue to fight with grace. Trans rights activist Rachanamudra came from Telangana to attend the protest too and spoke about why we need to speak in a “single voice” as people do not realize how the “government is meticulously silencing our voices.” 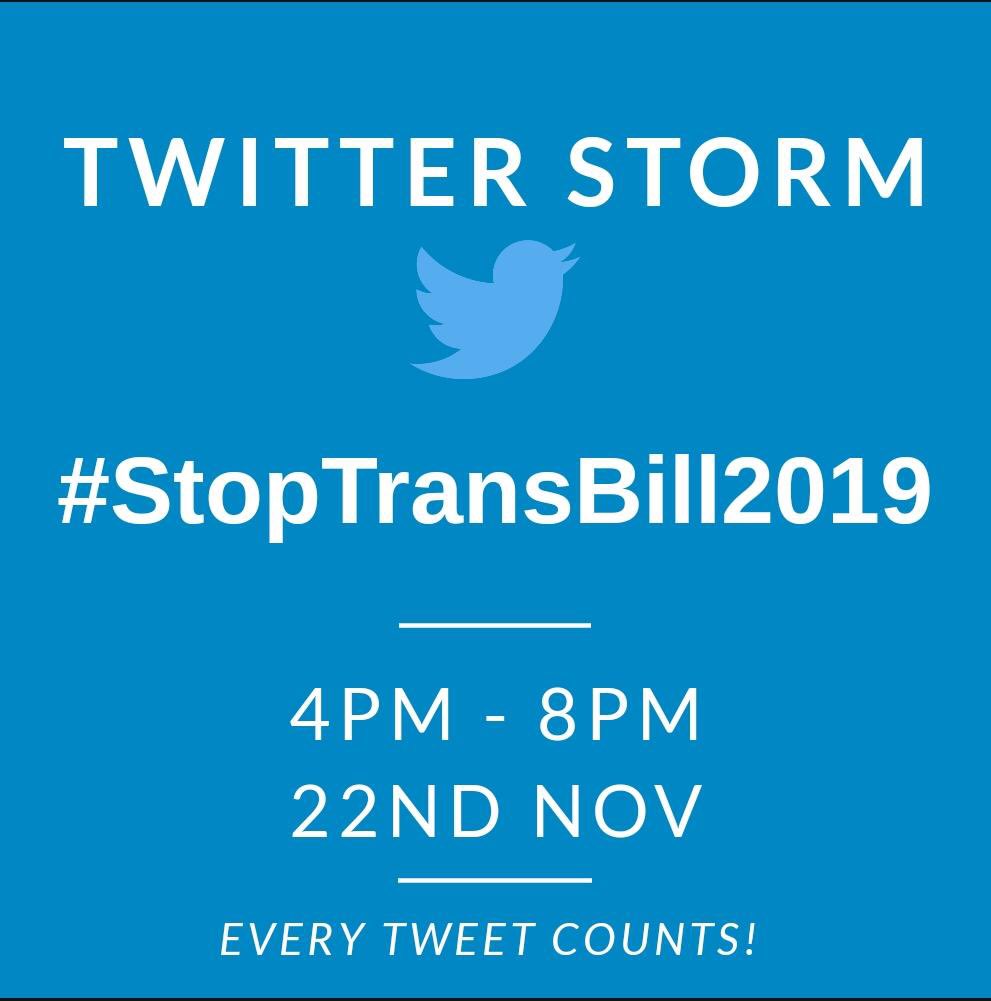 Ray tweeted a video and requested people to tag Rajya Sabha MPs to mobilize and create a collective voice on Twitter, along with the hashtag: #StopTransBill2019. Feminism in India, an intersectional feminist website, also posted an eight-tweet thread where it clarified “why we need to #StopTransBill2019.”

Both yesterday and today, this writer included, posted innumerous tweets with this hashtag to create awareness and make this hashtag trend.

Yesterday, this image was posted on Twitter to create the buzz, and it was very successful as Smashboard tweeted an eighteen-tweet thread explaining why this Bill must be stopped from getting passed in the Rajya Sabha, tagging Rajya Sabha MPs.

It doesn’t end here. As soon as anything trends, there’s a troll army ready to discourage you, and most importantly, to disturb your mental peace and distract you from getting the job done, i.e., creating awareness. This online movement was no exception to this “rule of the online jungle”. Within hours, Ray and Vikramaditya Sahai had to brave the heat, and they responded to the misogynistic, patriarchal, abusive tweets very gracefully.

Also read: Why You Need To Know About JNU’s Admission Process To Understand The Protest
You must be logged in to comment.

“We Aren’t Different, We Are Proud”: The Power Of Queer Collectives On Campus

It’s Not Easy To Be A Working Queer Woman

By Official Humans Of Queer

“For My Mother, Having A Gay Son Is Uglier Than A Son Who Deals Drugs”