Citizenship Amendment Bill: Does The BJP Have A Hidden Agenda?

Are the BJP’s continuous unwarranted acts like the removal of Article 370, NRC, Triple Talaq Bill and the Citizenship Amendment Bill just policy and administrative measures or is it much more than that? Maybe a bigger game plan?

Since its inception, the BJP is playing with the religious sentiments of people. Now, since the Babri Masjid issue is almost resolved, they need a fresh issue to play with, such that people will forget their basic needs and talk about the role of the BJP for their survival. Even though it is just propaganda, the way the BJP plays with people’s sentiments can amuse Hitler’s theories too. The saffron party is using religion just like opium, which will not allow the people to think in a sane manner.

The BJP is behaving as if should the CAB not be implemented, then it will be difficult for us to live safely! Along with this and the NRC, the BJP will try to distract people from the country’s main agenda. 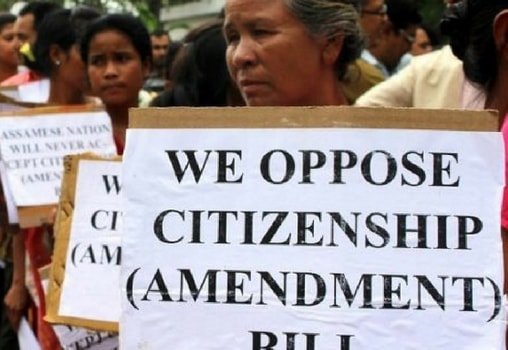 If we go through history and see how Ashoka’s dhamma policy or concept of welfare state affected citizens, then we will understand that since ages, India’s democracy has had some basic principles. But, the BJP has rejected everything, whether it is the basic principles of democracy or the basic structure of the constitution.

The role of Gandhi and Nehru is being ignored but the role of Nathu Ram Godse is being appreciated by an MP and our 56-inch-chested PM is not able to stop this from happening time and time again.

Playing propaganda politics, cheaply using social media, circulating fake images, creating imaginary history is the main work of the right-wing IT cell, and whosoever questions the government is offered to go to Pakistan. The BJP leaders who are not even aware of the year of birth of Bangladesh are questioning the loyalty of minorities who opted to live in India! This is just a recap of whatever happened in Jammu and Kashmir, the government totally ignored the promises made to Kashmiris in the past and now, whoever raises their voice is branded as anti-national.

With this propaganda, the BJP will eye many upcoming elections and this will feed their leaders for the next 10-15 years, till then, they will continue creating issues.

Home Minister Amit Shah didn’t even quote the correct year of formulation of Bangladesh, this shows his extensive research over the requirement of the Citizenship Amendment Bill!

India is known for its brotherhood, Gandhi, peace, and secularism but with this bill, India will lose the glory of its past and will carry the tag of oppression, just the way Israel or Nazi Germany do.

The BJP is playing very smart. It has not been able to create jobs, and has thus kept the unemployed youth busy in religious politics. These young people have forgotten that they are supposed to work and earn, they are busy using free mobile data for trolling those people who dare ask valid questions to the government. They are busy on Twitter, experiencing expertise in using foul language and threatening to send educated minds to Pakistan. More than their careers, these young people seem to be more concerned about the welfare of cows and moral policing.

The government is dealing with the protesters with an iron hand. The latest example is from Assam, where more than 20 protesters were left injured while opposing the CAB. This is not new, whosoever opposes this government has to pay a heavy price and gets branded as anti-national.

If the BJP is not stopped now, then it will ruin India’s image globally. The party who is claiming the Gandhi-Liaquat pact a mistake is itself sinning by bringing the Citizenship Amendment Bill into force.

The masses in general need to think about their welfare and even if everyone thinks about only their own welfare, I believe they will reject such divisive politics and will help India grow.

Does inflation, low GDP, crimes against women, law and order issues, oppression of the marginalised class, job cuts, healthcare, pollution, unemployment, population explosion, mob lynching, hunger, poverty, child labour, and illiteracy play a secondary role for our government? All these issues are haunting the people in general, but the central government is busy doing nothing. For what they are concerned is about cows, beef and temples, which will not feed the poor.

Also Read: Why The Citizenship Amendment Bill Is An Unwelcome Reminder Of The Two Nation Theory

It is time to rise above such politics and use our brains to save both humanity and the constitution.