Opinion: Capital Punishment Is Not The Answer To The Increasing Crime Rate In India

By Meenakshi Pandey in Society

“An eye for an eye makes the whole world blind,” said Mahatma Gandhi. It means that if we commit the same act that the criminal did then we are no better than them. Answer to cruelty is not cruelty.

Capital punishment, or the death penalty, is supposed to mean ‘legally’ killing a person as a punishment for the crime that the person is said to have committed. It is a type of corporal punishment. To understand if punishment is necessary and a possible solution to the crime, we have to understand the object and the theories behind ‘punishment‘ itself.

The word ‘deter‘ itself suggests that the main objective is to deter or prevent criminals from repeating the same act in the future. This theory aims at making the offender realise that they will not benefit from committing that wrongful act. It tries to create fear in their minds.

This aims at preventing violations by disabling the offenders, for example, by inflicting the death penalty on the offender, or by confining the person in prison, or by suspending this person’s driving license, as the case may be.

This considers punishment to be ‘curative’ or to perform the function of medicine. According to this theory, crime is like a disease. This theory maintains that “you cannot cure by killing.”

This is to make the criminal realise suffering by subjecting them to the same kind of pain as this person would have inflicted on the victim. ‘Retribute‘ means to give in-turn. This theory aims at taking revenge rather than social welfare and transformation.

This theory states that the object of punishment must not be merely to prevent further crimes, but also to compensate the victim of the crime.

Also read: Death Penalty Is One Of The Most Brutal Forms Of Legal Violation Of Human Rights

Dr. Jonathan Groner, an associate professor of surgery at the Ohio State University College of Medicine and Public Health, who has researched the deterrent effect of capital punishment, observed that “The psychological mind-set of the criminal is such that they are not able to consider consequences at the time of the crime. Most crimes are crimes of passion that are done in situations involving intense excitement or concern. People who commit these crimes are not in a normal state of mind — they do not consider the consequences in a logical way.”

The severity of punishment will not have any effect if the criminal believes that they can get away with the punishment, or that it will take years for the trial to finish. When the punishment is obvious and immediate, the deterrence-effect is more.

Also read: Death Penalty Is A Band-Aid To Pacify Mass Outrage, Not A Way To Stop Crimes Against Women

National Crime Records Bureau released data that mentioned that in 93.1% cases, the accused was known to the victim. Often, the accused is a male relative, like a father, uncle, or a male friend. In cases like these, it is possible that the victim/survivor will think a thousand times before coming out if they know that doing so will result in the death of that person. The death penalty can actually have the opposite effect, and the reporting of cases, then, will decrease significantly.

Let’s not forget that our society has many problems, one of them is casteism. Indian society is biased against the weaker section of the society that is Scheduled Castes (SCs), Scheduled Tribes (STs) and OBCs. This bias, unfortunately, is mirrored in the criminal justice system also. It is highly likely that the law is used against them, especially, when the perpetrator knows that they can’t afford expensive lawyers.

If any innocent person is charged as guilty and the death penalty is granted to the person, then, an innocent is killed. There is no other chance for the judge to correct the sentence. Granting the death penalty also does not leave any room for the reformation of the criminal. Nobody is born a criminal. A criminal mind-set is manufactured by society–think how children are raised in our society. Thus, the aim is to eradicate crime and not criminals. 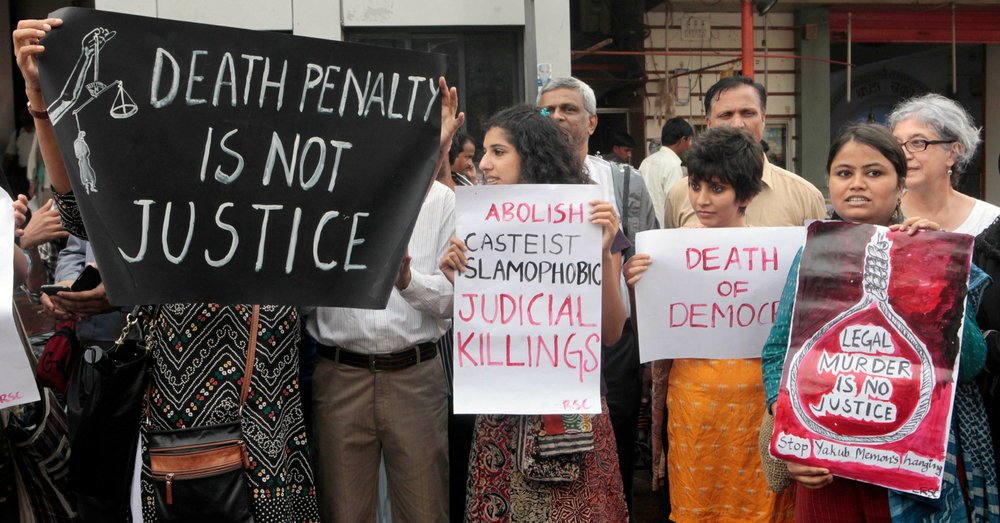 Criminals are also humans. They have human rights even if they have committed an offense. Nobody has the right to strip anyone’s – including convicts and prisoners’ – human rights. It is inhumane to tell someone that they are going to be killed in few months and there is nothing that they can do to stop it. I feel that people who ask for the death penalty are only, and solely, influenced by their emotions – a rage to kill the perpetrator. They are not talking with reason and logic. There are a plethora of emotions hidden behind asking for capital punishment for the perpetrator. They feel bad for the victim/survivor. However, it’s saddening that their feeling bad is proportional to the gruesome of the crime.

Think this: Rape cases are reported on a daily basis. Ask any woman or a person who actually follows the news, rapes happen daily in India. But these people who come out of their den and ask for the death penalty only come out and raise their voices when a person is subjected to brutality, for example, the Nirbhaya case and the recent case of a 27-year-old veterinary doctor who was raped, killed and burned. These people don’t care about the people who survive the crime.

Thus, only emotions are at work behind the rationale of these people, but the law is a purely deductive process, it is reason and emotion is an enemy to reason. It is very shocking when a Member of Parliament like Jaya Bachchan asked for the criminals to be lynched by the public, because what she is asking for is the public to take the law in their own hands.

Instead of only focusing on the punishment, we should also focus on the reason behind rapes being committed. Why are so many rapes happening in India? Why are these cases in the news every day? How can we increase security? How can we protect citizens? How can we change society’s view of women? These are the questions that need to be answered.

The need of the hour is to understand how to eliminate crime. The crime has to be executed, and not the criminal.