An Open Letter To All The Patriarchists: Our Priorities Are Seriously Misplaced

By Arpita Nayak in Society

No salutations here because I don’t know whether I feel angry or sorry or disgusted. Let’s admit it we don’t all see eye-to-eye, but honestly, sometimes I don’t even know which side I am on. Ever since I have known about my anxiety and depression, I have realised and acknowledged your presence. Earlier, I thought it’s a few people but now I know, it’s a whole goddamn system I face every day.

Yeah, yeah, you can count me as another man-hater woman on PMS, ranting shit about the patriarchy. Don’t you have a better cause woman? Well, that’s the main reason I haven’t addressed you by any gender. It’s sheer bad luck that I haven’t met a single feminist man in my life but if I have to believe my friends, they do exist. But to answer honestly if I have met a patriarchist woman, I sure have met plenty of them, in fact. Sadly, it includes my own mother and sometimes me as well. So, it might be a letter to remind myself that next time if I have to support my male relatives or male friends against charges of patriarchy, I need to be extra careful.

To introduce myself, I am a new-born feminist and a mental health advocate. These are not roles I have idolised in my mind since I was little, these happen to be just knee-jerk reactions to everyday events that happen around me. Today, I really felt like I couldn’t take any more of this and hence, it had to pour out in the form of a vindictive letter.

A few months back, I watched a movie called “Kabir Singh” which had a total of 16 dialogues by the lead actress. I was so disgusted thinking about this imaginary girl Preeti who despite being a doctor, loved to be instructed like a robot. Even so, a number of young girls were swooning over this imaginary boy who didn’t even let her attend a single lecture or make a single friend on her own.

I somehow can’t imagine, if this girl had not given in, what would her fate have been like? Would she have been depressed, anxious or suicidal? Who cares as long as the male protagonist fits the typical stereotype of an ideal man? He might have had temper issues and been in need of therapy. Again, who cares when you can just whitewash the underlying issue with labeling this as cool, macho, trendy, definitely male, eh?

Ok, you would say, “Grow up! It’s just a movie.” Thank God for that, but what about reality? While the world has acknowledged the power of influencer marketing, you guys are doing a fantastic world growing your tribe leaps and bounds by releasing irresponsible statements like the following: 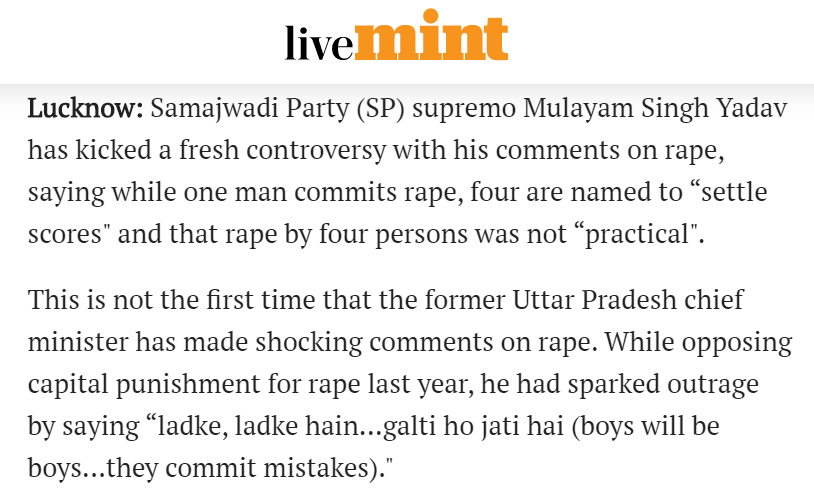 Yes, in a state grappling with a horrifying high rate of crime against women, this statement just amplified the awareness of “rape” which seems like nothing but a seemingly harmless yet illegal game of rummy.

Now you would say, it’s news from 2015, times have changed. I am glad you pointed this out because I would like to share something fresh out of the oven: 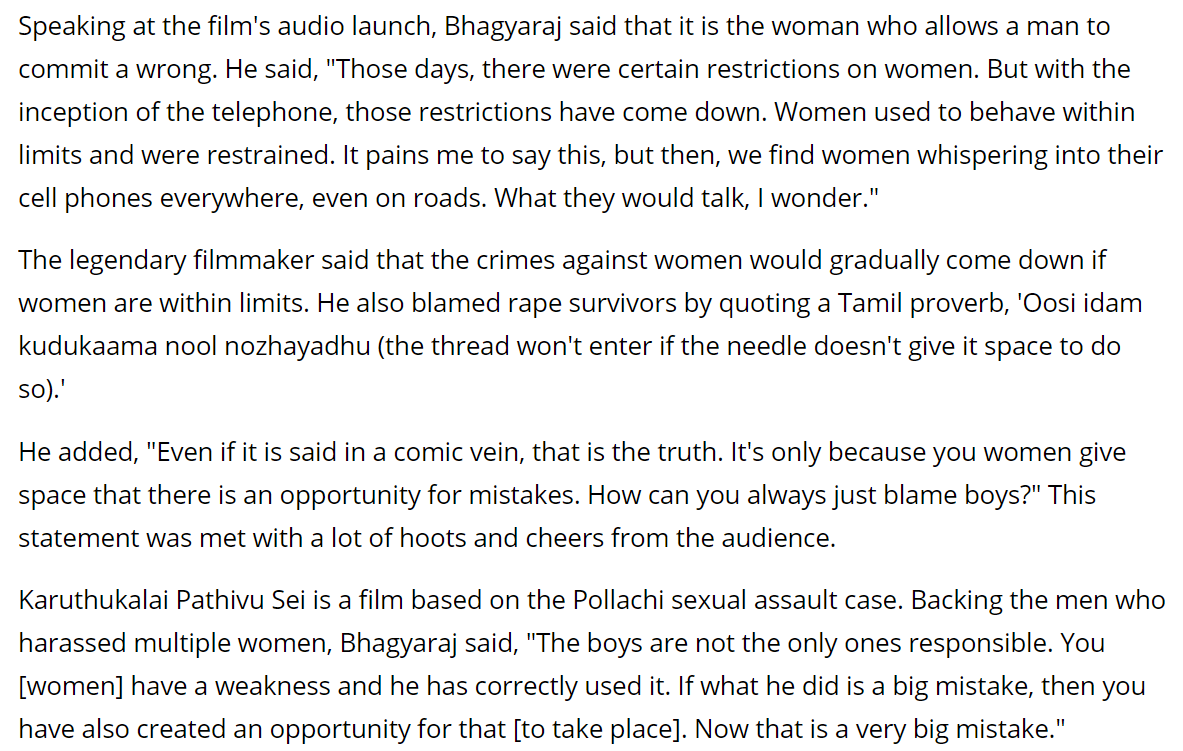 Sorry, for the long screenshot but all parts were equally enlightening. And, so has been the fact that there was a crowd present that cheered for this genius. In the comments section, I actually met a few genuinely optimistic people who really expected some logical answer by asking questions like, “What about infants and kids that get assaulted by their own relatives?” Oh, I know the answer.

The producer-actor forgot to mention about ‘chastity belt’. I am sure in a country like India where people are confused between Option A: Women’s empowerment because it seems logical, or Option B: Women’s suppression because that’s the popular choice, a chastity belt can be the product for the future. And I would really like to see it in the next season of Shark Tank.

So, if I apply the above logic, the girl ‘committed’ three ‘mistakes’:

Even this minister agreed when he said:

Don’t even bother to scroll down to the comments section because you have full support there. 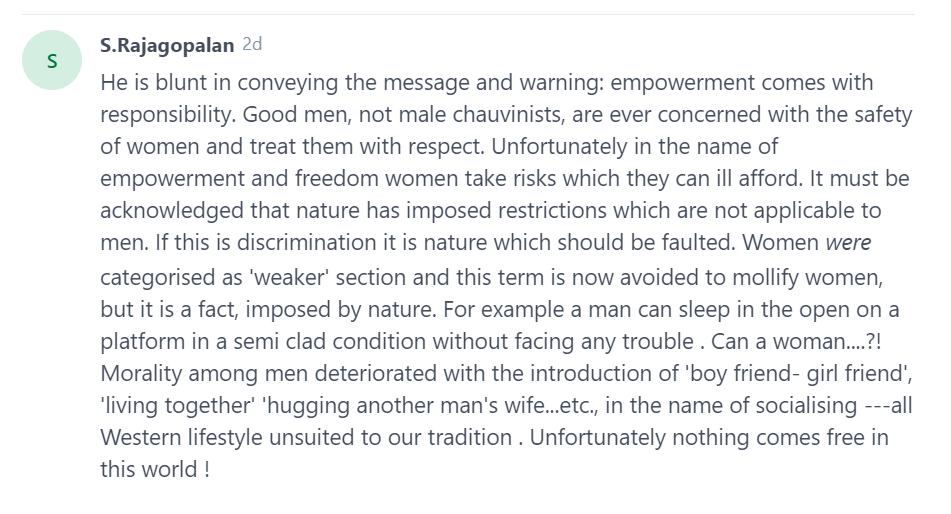 Yeah, nature and all you know! It reminds me of an incident from my childhood. My father’s friend happened to be the director of a government zoo. He rescued a tiger cub once, adopted it and treated it like any other house cat. I remember playing with it, and it was cute and all. As it started growing, it became aggressive but still, it never attacked anyone in the family.

I just wonder if we are supposed to respect a man’s ‘nature’ and remain indoors and be careful as if we are playing some war game? Why are these beasts like tigers and lions kept in cages? They are more powerful than man and it’s their nature to kill. So isn’t it absolutely logical to either set these beasts free and blame mankind whenever someone becomes a meal to them or lock men in a cage too?

This discussion certainly takes me back to the hunter-gatherer times when people would live in groups and muscle strength was the only factor. It would be so nice: no global warming, no mind games and at least women in my house would share the house chores. The dreamer in me is too much sometimes, I swear.

Did I hear the word hypocrisy? Let me entertain you with another pick of the day:

My first reaction to such news is: 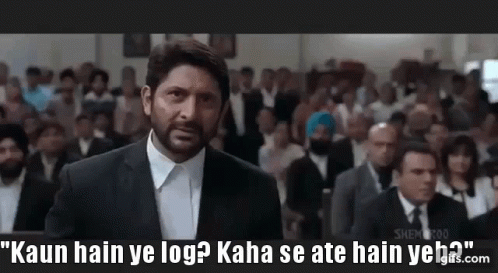 The nation wants to know. These are the same people whose sentiments are hurt by song lyrics, books, paintings, etc. They would declare a death sentence for an actress who portrays Padmavati, a fictional character but would blame a rape victim. These people would drive a renowned artist out of his own country, but for men who actually tear women’s clothes, the same people have words of sympathy, “women are responsible too.” How misplaced are our priorities?

These incidents happen every day but people ignore them quoting different reasons. Some would blame the victim, some would cry a foul quoting a handful of false cases and when everything else fails, they would just say “Not All Men”. That’s the kind of responsibility we have assumed.

Also read: ‘For Women To Live In Fear Is The New Normal For Our Country’

Men who condemn these incidents in the office room call some other women ‘slut’ while smoking outside the premises. And that’s why sometimes even I hesitate to call myself a “feminist” because even I don’t know what level of hypocrisy I live with. But I know this, there is something more real than “#NotAllMen” and that’s “#NoWoman”:

No woman deserves to be raped.

No woman deserves to be harassed or slapped or insulted.

No woman deserves to be denied access to education.

No woman deserves to be stopped from following her heart.

No woman deserves to be denied her freedom.

And above all, you won’t get a chance to complain about how your roti is not round because you would have to make it. Who knows the world might change the definition of the roti-shape then to suit your perfection!

Also read: “The Society We Live In, As ‘Late’ As 7:45 PM Could Be When Monsters Walk The Streets”