Worried India’s Sexual Harassment Laws Are Too Complex? Allow This Book To Explain!

By Akshara Bhargava in Feminism, Sexism And Patriarchy, Society

Life is hard for everyone, however, being a woman has its own limitations. One day she is treated like a goddess and next, beaten to the ground. She is a beauty with scars and bruises, born out of countless abuses.

Since childhood, a girl is instructed to sit properly, laugh properly, talk softly and come home early. Instances of harassment, molestation and sexual harassment have occurred irrespective of how a woman behaves at home, workplace or in public. In such situations, a girl either keeps quiet, scared of critical judgment and character shaming or suffers the consequences of taking action.

Body shaming, lewd comments, and wild stares have become a daily routine. Hence, it is important to not just raise our voice but also act on the problem and serve justice to the survivors. Ignorance would only open a window of opportunity for these perpetrators.

The #MeToo movement hit the country like a rock, a huge number of women from the entertainment industry came forward to take action against sexual harassment. The silence was broken! They not only threw light on the ground reality of the entertainment industry but also inspired many other women to do the same. It is disappointing that trustworthy people who were once considered as idols are often the cause of such misery. 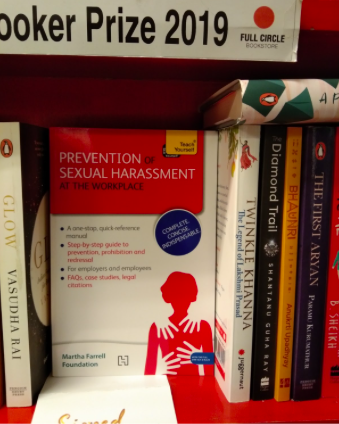 The book is divided into parts and intimates the reader about The Sexual Harassment at Workplace (Prevention, Prohibition and Redressal) Act of 2013.

There are types of sexual harassment at a workplace which include stereotypical roles, male work ethics and unequal opportunities along with the body language of the male colleagues, the jargon used to define a woman’s identity, and sexual favours.

Sexual harassment can be verbal in the form of jargon, comments or jokes and physical in the form of inappropriate touching, stalking, unwelcome hugging, etc. Often these are deemed as ‘humour’ and a part of ‘work culture.’ One should be aware of and respect the boundaries of the other person, as it is the impact and not the intent that matters.

The book has listed do’s and don’t ‘s as a co-worker as well as a detailed timeline for redressal. The book answers questions like, the steps that need to be taken by an organisation to adhere to the law, the consequences for non-compliance, and how workplaces can be made safer for women. It summarises the definitions, forms of sexual harassment, along with the roles and responsibilities of the organisations, employers, and colleagues.

The book is useful in understanding the Act, its mandates and the procedure to be followed, and provides sample formats and forms for the same.

An Internal Committee (IC) should be set up in every organisation while Local Committees in every district. It aids in understanding key concepts related to sexual harassment and provides additional reading materials and resources. Schools and colleges also come under the umbrella of the workplace, therefore, every school and college must set up an IC.

Also Read: Was The #MeToo Movement All About The Populist Upper Class?

On the whole, the book is a visual A-Z manual with easy-to-understand explanations, detailed key processes, and case studies along with sample letters, reporting formats, outlines, and draft policies to aid internal and external compliance. It is a must-read and an informative guide for you, me and anyone who wants to make the workplace or any other space a safe place.