Anugrah Narayan College: How A 63-Year-Old College Is Slowly Regaining Its Lost Identity

By Aayush Verma in Campus Watch

Anugrah Narayan College, in Patna, was earlier known as Gardanibagh Tutorial College and was running in an evening shift. Later the college was transformed into a Public Government College and renamed as Anugrah Narayan College. The college is solely driven on the ideas and principles of Dr Sinha, and his memories are still alive many years after his departure. The campus is located in the heart of Patna at Boring Road over an area of 13 acres.

There was a time when Anugrah Narayan College (AN College) Patna received immense attention and exerted a dominant presence in the state. But, the modern era and the emergence of private colleges surrounding every city or town has overshadowed one of the best historical colleges of the state. With the emergence of private institutions, government colleges are receiving less attention.

The historical Anugrah Narayan College has fought a lot of challenges over many decades to regain its position as one of the most established and largest colleges of Bihar. The maintenance during the previous years has not been sufficient. But, as they say, after every dark night comes sunshine.

The Chief Minister of Bihar has shown immense concern for this college and since the past 4 years, the college has grown a lot.  The previous stagnant growth and the weak performance had resulted in a bad image of the college. However, the institution is no longer a college with a bad reputation. Just as we store every memory and make it special, our duty is to bring back the positive presence and historic representation that the college deserves.

Well known among the city locals and the old people needs a new restructuring of thoughts and reputation online as well as offline. The past has already been told, and I will feature the present and the current status of Anugrah Narayan College. 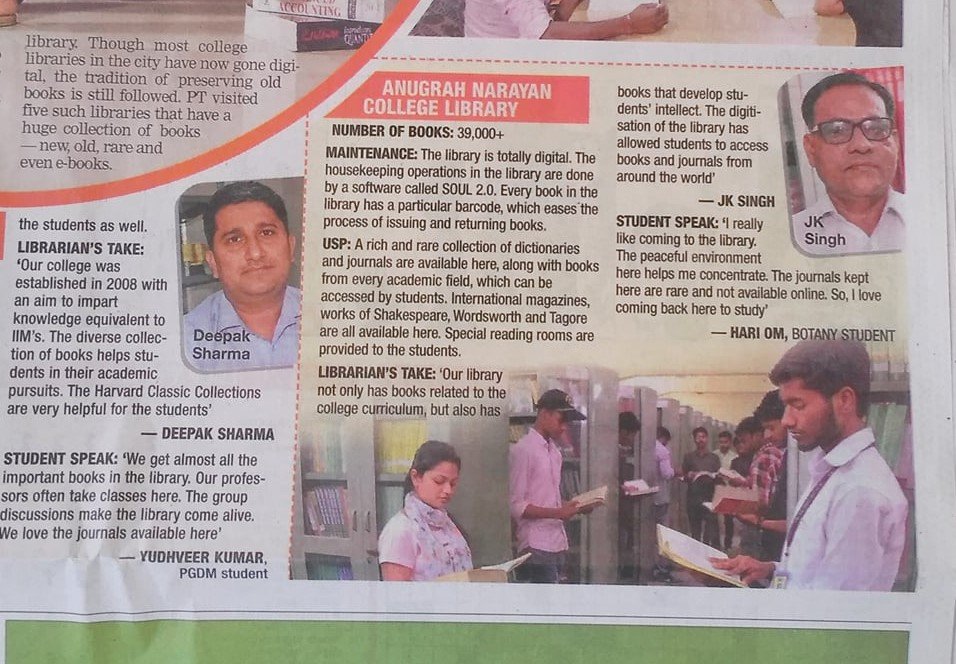 Besides this, the college also offers academic education of Class 11 and 12. Every year, thousands of students from different fields graduate from here. The college has one of the largest campuses in Bihar, with a variety of specialised courses, at a single destination with all running on its own rules and regulations.

Besides the large campus area, the college has a police station, a Punjab National Bank branch, 4 seminar halls, and a central library hall in its premises.

Anugrah Narayan College has once again proved its best performance and good management. The college has received Grade A rating by NAAC (UGC) and the rank stands top among all the colleges in Bihar with CGPA 3.27/4.00. None of the colleges in Patna University has reached the top rank except Patna Women’s College.

AN College is a constituent unit of Patliputra University; the slow-performing university has resulted into the slow performance of the college too.

The college has recently undergone lots of changes and has the largest technological advanced central library in the campus area.

The college is well known for taking major initiatives and a large number of events and seminars take place in the campus seminar halls. Every week they have a minimum of 2 events which take place spanning over different departments in the college.

The college also receives national and international projects and will represent the country for the European Union Project on Waste Management. The Government of Bihar has itself funded this college to improve the infrastructure and transform the campus area.

Also Read: How Bihar’s Kedia Has Become A Model Village For Organic Farming

There are currently many stand-alone and unique projects running in the campus, few of these include: establishing yet another auditorium, a multi-purpose building inside the campus, restructuring the campus walls and equipping the campus security with the technology of a radar system. The college is all set to regain its lost position and the inauguration of the new projects will also take place soon.