‘We Cannot Let The Anti-CAA Protests Die Down, We Must Keep Pushing’

Ever since the authoritarian Citizenship Amendment Bill (CAB) was passed in both the houses of the Parliament and the President made it a law by giving his assent, protests have erupted in various parts of the country. People have been actively voicing their concerns over the horrible consequences of the CAA in conjunction with the National Register of Citizens (NRC). 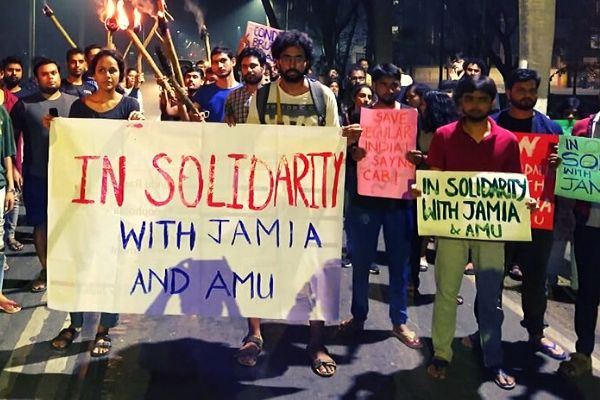 Simultaneously, they have been expressing solidarity with the protests that happened in Jamia Millia Islamia University and Aligarh Muslim University, after the police sparked violence against the students there. The anger and resentment of the student communities are on full display, and most agitations have been peaceful. But the police have continued to crack down on dissenters in many instances, and the number of injuries and deaths is slowly rising.

Even though the current government is known for its insensitivity towards minorities through many of its reforms, it is for the first time that people have come out in such large numbers to show their resistance against such a discriminatory bill. It is also encouraging to know that the protestors are not just from the Muslim community, who have been most visibly excluded from the provisions of the bill. People from all backgrounds have shown up, irrespective of their faith or political affiliation. Students have been able to mobilize such huge numbers entirely on their own, without any strong persuasion from political parties/groups or any talismans spearheading the movement.

Although the chaos has helped spread awareness and create unrest about future possibilities if CAA comes to effect, there is always a chance the protests might die down due to the lack of organization. The government always has the option to wait it out and see for how long the protests last—for how long will students cut classes, for how long will employees not go for work, for how long will people remain on the streets, for how long will their belief that the fight is worth it stays. And while such predicaments lurk in the near future, it is all the more important that we continue pushing and keep our spirits high.

The ruling party is trying its absolute best to generate violence between the police and protestors and blame the same on Muslims hoping such rumors would justify their stand on Muslim immigrants. The Prime Minister himself had implied that Muslims are the ones responsible for the violence, by remarking that one can identify them through their clothes. The intentions of the top brass are being laid bare here when the protests have largely been peaceful. In all the other cases, it has been the police who perpetrated violence against unarmed civilians.

It has also been trying to placate those who are still wary of the purpose of the Act by repeatedly promising that the combination of CAA and NRC is not harmful to any of the citizens and that it does not discriminate in terms of religion. It has reached a point where even the news outlet ANI has been used to carry out the same. It is also difficult to see the deletion of an earlier tweet by the official Twitter handle of BJP, quoting that all infiltrators except from the six religions mentioned in the CAA would be removed, as a mere coincidence.

To be honest, the agitations have already been fruitful to a small extent. The BJP vocally admitted that they hadn’t anticipated the retaliatory protests against the implementation of CAB. The nationwide demonstrations have served as an amplifier for the voices of the oppressed, as many of their worries and anxieties are being brought to the mainstream conversations.

Apart from this, more people are becoming aware of their apathy and apoliticism as they are either being called out or are realizing that their inaction is only going to further the transgressions committed by the current government. The ones who still support CAA are unquestioning followers of the Hindutva ideology who have been enchanted by the concept of ‘Hindu Rashtra’, or those who believe in Modi as the sole savior of our nation and refuse to believe otherwise.

All our nationalist, xenophobic leaders and their bigoted followers must be shown that when the protests have a clear motive, it does not matter whether there is someone or something to follow. The Citizenship Amendment Act needs to be scrapped, and the NRC exercise needs to be stopped in its entirety.

Also read: ‘One Good Thing The Govt Has Done Is Unite All Of Us Against Divisive Politics’