Thanks To The Govt, Young India Has Finally United Against Divisive Politics

My name is Tara Bhatnagar. I am a Hindu. My father, now deceased, was a Hindu. My mother is a Christian. My uncles and cousins are Muslim, Sikh and Christian. One of my aunts and my sister-in-law belong to Assam. We are Indians and a fine example of ‘National Integration’, something even my grandparents had no choice but to encourage. If they could, then the current Indian government holds no ground in their filtering of Indian citizens.

It is important to reiterate the fact that we are born into a religion by chance, and it is from family values and our understanding of the world that we shape our beliefs. However, at the end of the day, we are all human beings with the same feelings; the same joys and sorrows and the same attachments, and this should be reason enough to band together, even in the most testing of times.

I am not here to tell you how wrong the Citizenship Amendment Act or the National Citizenship Register is. I am not going to sermonize how unjust the new National Population Register is either. There are women and men far more qualified to do this, and I am happy to share their work. All I can say is that these laws that the BJP government is working relentlessly to pass are unconstitutional and entirely against the ethos of a secular, democratic India that our forefathers envisioned and successfully executed in 1947 when we gained freedom from the British. 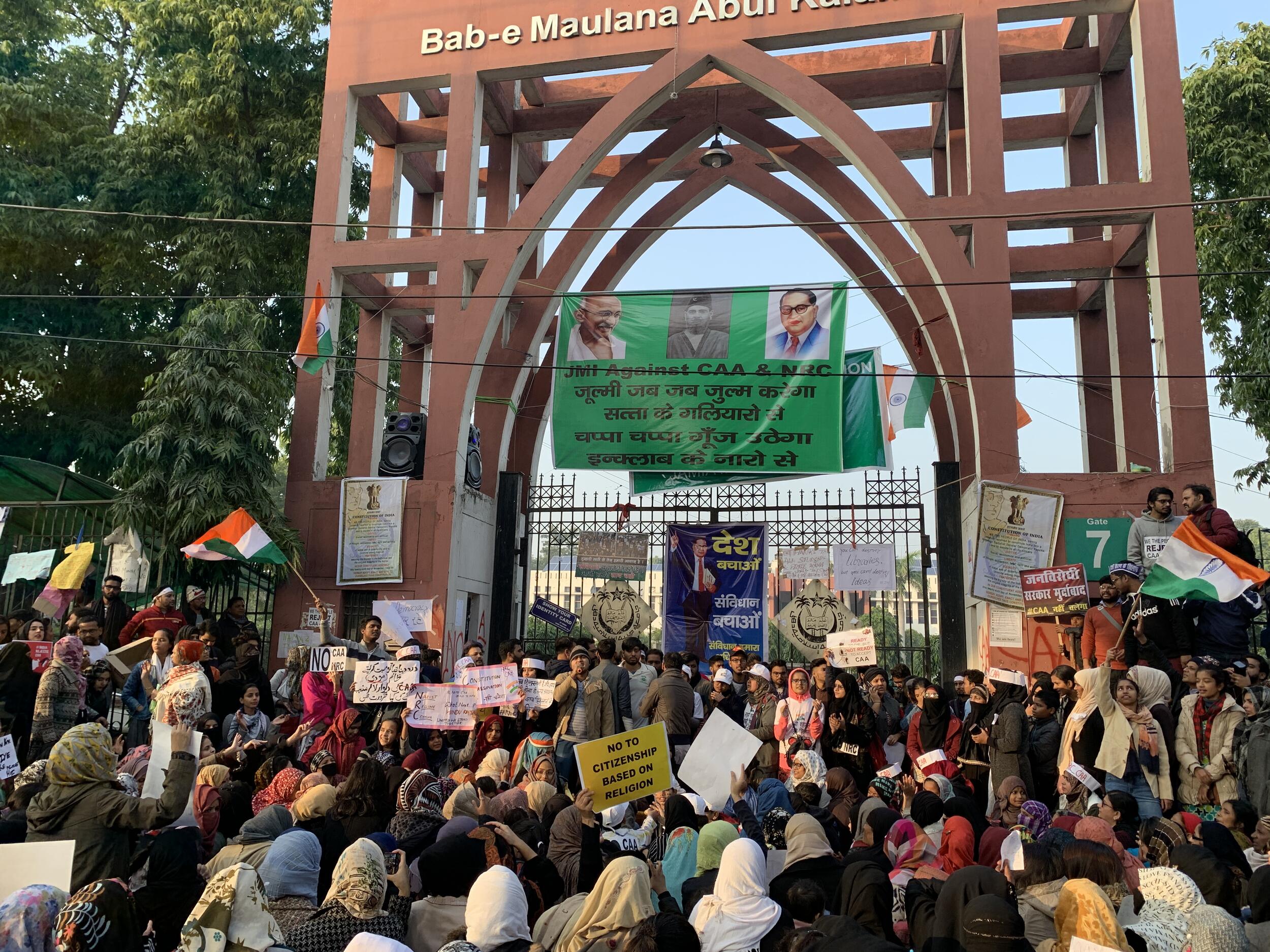 The recent “uprising by the people of India” as Umar Khalid, activist and former JNU student, calls it, is proof that the people of this country are unwilling to accept government orders blindly. Having been a part of several protests across Delhi and the news from across the country, I can confidently say that the people of India are angry and are taking to the streets to show it. However, the government, in a show of strength has clamped down on states like Assam, Uttar Pradesh and Karnataka (in some measure) where the number of deaths due to “alleged” police brutalities is, sadly, only on the rise.

While I am not surprised by Modi-Shah’s antics, it was pretty obvious (to me) after Godhra; it is the behavior of the police and the bhakts that really astonishes me. I have, over these last few days, lost several people I called friends because of their insistence that the CAA has nothing to do with the citizens of India and their claim that I was unnecessarily spreading discord and hate by joining the protests. My own explanation of my stance has fallen on deaf ears, and the discussions have often turned ugly because, as you may already know, all bhakts have a standard script which turns absolutely vile when they’re unable to convince you that they’re right. Needless to say, good riddance!

My mother and I were detained from a protest at Red Fort on the 19th of December, 2019. It was, I have to admit, one of the most surreal things to happen to me. One minute I was chasing after Yogendra Yadav as the cops were detaining him, and the next minute, I was on a bus myself.

The policewomen who dragged us to the buses stationed behind the barricades seemed scary at that moment, but once the bus was sufficiently full and they got on, they were just bored and tired. Same for the men. They took us to an open stadium (read: makeshift jail) where all those detained were allowed to protest under police supervision.

We were fed bananas and samosas, and we were singing and chanting, while they sat around on the grass, chatting among themselves. And, while I consider myself extremely lucky to have experienced a relatively easy day—a sort of picnic we couldn’t escape—not everyone can say the same. After the crackdown by the Delhi Police on the students of Jamia Millia Islamia on the 16th of December and the peaceful protest at Daryaganj on the 21st of December, one can’t be too sure if they still have their ideals intact. The death toll in Uttar Pradesh is proof enough.

What is remarkable, however, is the fearlessness of the citizens on the ground. Be it Jamia, Jantar Mantar, Red Fort, Mandi House or Shaheen Bagh; the people are unwilling to give up! At this point, I’d just like to add that the winter this year in Delhi is unforgiving. I went to the protest at Shaheen Bagh last night; a silent protest by women who have been camping on the main road 24×7 for the last 13 days, with their kids in tow. They are not only protesting against the CAA-NRC that attempts to strip them of their citizenship but also in solidarity with the students of Jamia, many of whom are their own children.

The area is cordoned off by a rope, inside which the women and children sit facing a podium, the men surrounding them. There is a steady supply of food and hot chai, prepared by the protestors themselves and speeches by various speakers ranging from students, lawyers, actors and academics. With the temperature hitting a minimum of 5 degrees, it is overwhelming how relentless these brave women are. One can only hope that these collective protests bear (sensible) fruit. ‘Don’t be silent. Don’t be violent’ is the mantra of the protests against the Citizenship Amendment, and it is essential that we adopt it.

Be it abrogating Article 370 in Kashmir or the Ayodhya verdict, none of these incidents provoked the people of India the way the CAA and NRC have. There has been a visible awakening in the masses, albeit a little late, but it will take a lot to quell this fire. And while, you may have had enough of sitting silently and decided to fight, a time like this can also be extremely unnerving for some.

Also read: ‘All Of Us Opposing CAA Need To Unite Because It’s Our Unity The State Is Afraid Of’

Everyone with or without a voice must stand up now, educate yourself and those around you, and even though it isn’t essential to be everywhere, it is crucial to get out of your house and show solidarity with those on the streets. It is simply not enough to sit in front of your televisions or on your phones/laptops and absorb the government’s injustice. Also, carry food and water wherever you go. You never know where you might get stuck during a protest or a shutdown. Or you might just get detained! Be prepared! And while I am no expert on protests, I beg you not to lose momentum not now in any case.

Let me end by saying that the one good thing the BJP government has done is unite all of us against their attempts at vote bank politics. The fact that they have failed us as a nation isn’t hidden any longer. The idea of a Hindu Rashtra may be an exciting prospect for some, but let’s not forget what the ONE thing we were taught repeatedly in school: ‘United we stand, divided we fall.’