On December 20th 2019, anti-CAA protestors in Old Delhi’s Daryaganj and Delhi gate were met with brutal lathi-charge and water canons by the Delhi police. This resulted in several injuries.

Pinjra Tod’s Twitter handle reported people lying on the streets, bleeding. Several lawyers and doctors reached the location to provide legal aid and medical care to detainees and those injured.

Many lawyers under the banner of ‘Lawyers for Detainees’  reported not being allowed to meet the detainees, who were inside the police station for several hours. However, the police officials eventually allowed a lawyer inside and gave a list of detainees. The lawyers have now moved the Karkarduma High Court. 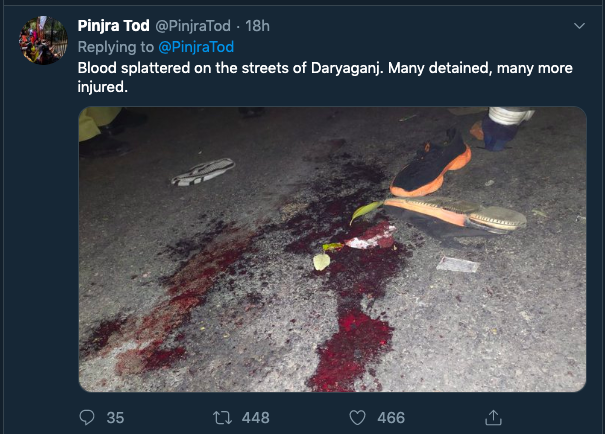 This is what the Tweets said:

“URGENT: Delhi police has water cannoned at Daryaganj and has brutally lathi-charged at Delhi Gate! They are hounding protesters and beating then ruthlessly. We are hiding somewhere they beat us saying, “Behen ki laure” and also beating up children also! Send help.”

“Many have suffered serious injuries and police clampdown is continuing. This is an urgent appeal for legal and medical help for the people injured and trapped there.”

“We have information that 42 minors have been detained inside PS Daryaganj with no access to any legal representation and no permission being provided for parents of minors to meet them. Lawyers aren’t being allowed access!”

Also read: Two Killed In Mangaluru And One In Lucknow During Anti-Caa Protests

#ReleaseUGCJRF: “We Are More Worried About Our Stomach And Family Than Our Research Now”