Silence Is Not An Option. We Must Resist CAA And NRC However We Can

Monday blues and chilly winters, that’s how my Monday looked like on December 16th. The Delhi metro is usually a haven from the chilly breeze, and trust me, this shield stays for an hour and a half. As I rested on my seat comfortably, my mother texted me, “Read the news. Jamia students in trouble.” 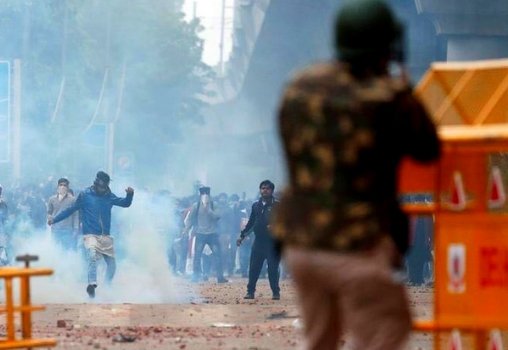 The protests in Jamia Millia Islamia (JMI) were already laying heavy on my heart. After all, it is my alma mater. But as I checked Twitter and my Facebook news feed, I was aghast at the developments. The Delhi police had entered the Jamia Central Library and lathi-charged students and released teargas shells on them. #SOSJamia was one of the trending hashtags on Twitter.

My friends and juniors shared videos from inside the library. Girls were frantically screaming for help, while others hid beneath benches and desks to hide from the lathis the inhumane policemen so proudly wielded.

In the following days, more and more stories emerged along with news reports of buses being burnt and several campus protests across the country. Aligarh Muslim University (AMU) was another institute that suffered at the hands of law-enforcers, with a student’s hand being amputated.

My blood boiled. I couldn’t attend major protests. But here I am, using my virtual pen to register my dissent against the Citizenship Amendment Act and the violence unleashed on Jamia and AMU students. Firstly, I am so proud of Jamia students who stood up against injustice and continued to protest. They did not crumble under fear. And to all those who question the students’ role in the buses being burnt, let me tell you that these students are here to study for a bright future.

Jamia professors teach us to think rationally and stand up for what’s right. Why would they burn buses and set public property on fire? With a student strength of more than 2000, Jamia has around 1300 post-graduate students. The Government of India’s Ministry of Human Resource Development ranked Jamia Millia Islamia at 12th position in the country.

As per the JMI website, some of the PhD students have submitted their research on ‘Religious approach to environmental issues: Comparative study between Buddhism and Dongria Kond’s faith’, ‘The Oral Tradition of Santals’, etc. Some M.Phil theses are on Sikh scriptures, concept of God in the Old Testament and the Quran, folk deities and religious culture in Jaipur between 1200-1700, etc. Do you think these students would ransack public property? Just have a look at their topics of research—such a variety of intellect! And do you believe these students would go on a rampage?

The other day, during my usual metro ride, I overheard a middle-aged woman saying, “Jamia ke saare bachche fake ID se padhte hai. Hai yeh saare Pakistan se.” (Jamia students study here with fake IDs. They are all from Pakistan). I wanted to nudge her and inform her that this piece of information was fake. But I realized it’s a societal mindset that has led to ‘us vs. them’. An article in The New Yorker exactly outlines how political leaders have fed on this narrative for years, from the rise of right-wing extremist groups before Independence to the recent Citizenship Amendment Act that is based on religion.

What Can You Do Today?

1. Take part in protests, but refrain from violence. Remember Ambedkar and Gandhi ji as you raise your voice of dissent.
2. Educate yourself with the writings of our freedom fighters and what the Constitution says.
3. Write post cards and letters to the Prime Minister’s Office or the Ministry of Home Affairs. You can check this Instagram post to know how to go about this.
4. Use hashtags and keep posting on your social media accounts. Remember the Arab Spring that was fuelled by the power of social media in a number of Arab countries.
5. Talk to your friends and family members, and listen to them. Send them articles and have constructive debates.
6. If you are a writer, pen down articles and flood the internet with dissent.

Moreover, do not be cynical. For hope can take us forward against hatred and bigotry. Because सारे जहाँ से अच्छा, हिन्दोस्ताँ हमारा |