Will The Supreme Court Of India Reject The Citizenship Act?

By Imran Baksh in Politics

Since the Citizenship Amendment Act (CAA) or Citizenship Amendment Bill (CAB) has been passed, in both parliamentary houses; the Lok Sabha and Rajya Sabha with a whopping 311 MPs voting in favour and 80, against the Bill, in Lok Sabha.  And with 125 votes in favour and 105 votes against it in Rajya Sabha, one question has been widely asked – will the Supreme Court of India reject this bill?

The Bill was introduced by the Minister of Home Affairs, Amit Shah on 9 December 2019 in Lok Sabha, and it got great support from BJP allies, namely Janata Dal (United), AIADMK, Biju Janata Dal, TDP and YSR-Congress including BJP MPs. It was the number of votes in favour of this bill that led it to become an Act after the assent from the President of India Ram Nath Kovind on 12 December 2019.

Many legal experts and advocates are raising the question against the legitimacy of the bill, most of whom citing that the newly amended Citizenship Act is in violation of Article 14 and other basic principles of the Indian Constitution.

Former General Secretary of Lok Sabha, PDT Acharya raised his concerns regarding the act saying, “It seems to violate not only Article 14 which is the right to equality, but also Article 5, Article 11 of the Constitution, which prescribes provisions regarding granting of Citizenship.”

On the other hand, many opposition leaders, including Congress, have also given the red signal to the bill; they said it will promote communal tensions and polarise India.

The Indian Union Muslim League (IUML), a member of the United Progressive Alliance and a state party from Kerala has petitioned the SC to verify the validity of the new legislation.

“Today they are excluding Muslims, tomorrow there can be someone else — like people speaking a particular language or from a particular region,” P V Abdul Wahab, a member of IUML and a Rajya Sabha MP from Kerala said, talking to media.

From the proposal of CAB in the parliament to its assent from the head of state of India and following, there have been extensive protests across the nation. The resistance erupted in Assam soon after the bill was cleared on 4 December 2019 and till date, six people have died and fifty people have been injured in the protests.

There have been several other large protests and rallies in the country, principally in metropolitan cities including Delhi, Mumbai, Kolkata, Hyderabad, Bengaluru, and Jaipur. Meanwhile in south Indian states Kerala and Karnataka there have been some smaller rallies against the act.

Union Home Minister Amit Shah defended the bill, by delivering impassioned speeches and statements, addressing the religious persecution of minorities in Pakistan, Bangladesh, and Afghanistan that will be able to seek citizenship through the newly rectified and sanctioned CAA.

While congress lead Rahul Gandhi tweeted, “The CAB & NRC are weapons of mass polarisation unleashed by fascists on India. The best defence against these dirty weapons is peaceful, non-violent Satyagraha. I stand in solidarity with all those protesting peacefully against the CAB & NRC” denoted his support to the protestors. 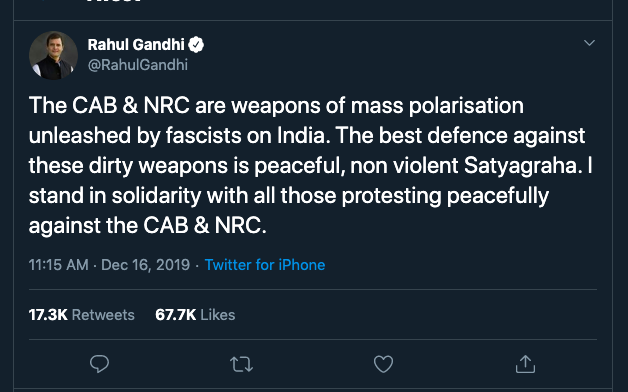 After the protest turned violent in Jamia Millia Islamia and Aligarh Muslim University, due to confrontation between protesting students and police, PM Narendra Modi assured that the “CAA does not affect any citizen of India of any religion” and called the violent protests “unfortunate and deeply distressing.”