The panel on ‘Addressing Young India’s Challenges Around Gender and Health’ presented by United Nations Population Fund (UNFPA) and United Nations Volunteer (UNV) with Dr Zoya Rizvi, M. Suman, Nidhi Goyal, Jasmine George and Rituparna Chatterjee began with an introduction to all the speakers. The panel was led by Rituparna Chatterjee, who has worked extensively for gender rights, intersectional feminism, the #MeToo movement, Reporters Without Borders, and many other related concerns. 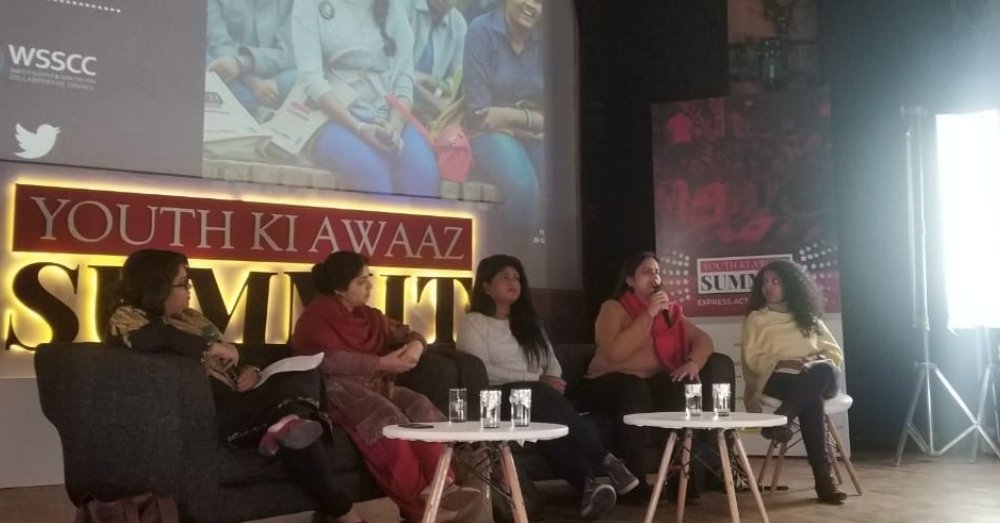 The panel was an all-inclusive, detailed talk with Dr Zoya Rizvi; who works in the Ministry of Health, M. Suman; a transgender activist, Jasmine George; the founder of Hidden Pockets who provide abortion facilities for young people and Nidhi Goyal; disability and gender rights activist and also the founder of Rising Flame. It covered issues from consent, privacy, access, gender, disability, trans bill and many other related issues.

The talk began with Rituparna Chatterjee highlighting the major causes of discrimination in health services, which include economic disparity, caste, class, and gender. She spoke about the problems with the recent Trans Bill, like the right to self-identify, and who determines what healthcare facilities we get.

Rituparna Chatterjee said, “It’s only recently the World Health Organisation has said that being a transgender is not a mental disorder. It took us so long to even acknowledge that.” She also highlighted the problem of female genital mutilation, the expensive costs of mental health facilities, and lack of facilities and policies, for Adivasis and Bahujan women.

The concepts of consent, privacy and access in the sphere of ability and disability in healthcare were focused on by Nidhi Goyal, who spoke both in English and Hindi, considering the diversity of the audiences. Nidhi focused upon the problems of access, such as ignorant treatment of the disabled, which makes them feel undignified, vulnerable and dependent.

She substantiated her point through an instance of her friends, who were on wheelchairs, and wanted to have a scan. She showed the audience how their treatment by the hospital staff put them in a very vulnerable position, where anyone could touch them, in any way they wanted to, without seeking consent.

The desires and sexuality of disabled people are ignored, and not encouraged, which leads to stereotypes against them. It also goes much deeper than this, because in cases of sexual violence and rapes, doctors and society do not understand the trauma from their point of view.

Also read: Will It Take Nothing But A Revolution To Make Sure India Is A Safe Place For Women?

Thus, it becomes important to sensitise doctors and train them, through proper communication. The talk also highlighted the problems of patriarchal discrimination and the ignorant treatment of doctors, while treating women patients, and disabled patients. The case worsens when doctors treat mentally challenged rape survivors, who are not even considered sane enough to describe their problems. Nidhi left the audience with thoughts and stories to think about and discuss further.

M. Suman On Her Struggles As A Trans Woman

The discussion continued with the struggles of M. Suman, who talked all about her story as a trans-woman. She began with problematising the hierarchy in gender, as first, second and third being male, females and transgenders, respectively.

She highlighted the systematic domination faced by trans people and substantiated it through her own experience, in a hospital, where the medical staff was completely uninformed about issues of gender and sex. A staff member who was medically educated asked Suman about her uterus. Quoting the exact statement- “Tumhara uterus gayab hai” (Your uterus is missing), leaving Suman very uncomfortable.

The doctor inappropriately asked Suman, who quotes- “Tumhara kya hai vaha par” which translates to “What do you have there?”. Suman points out the very ignorance of the medical industry. The lack of information about gender and sex, especially in specialists like doctors, is highly problematic. This lack of information also creates stereotypes and discrimination, propagating knowledge gaps.

Suman wrapped up with the problems of the Trans Bill, that violates the rights of trans-people, forcing them to get physical checkups and losing their privacy in the hands of district magistrate officers, who aren’t even specialised and trained in gender and sex education.

What we need right now is to create an inclusive environment for persons with disabilities through awareness, accommodation and access: @saysnidhigoyal
founder @RisingFlameNow on addressing challenges around #gender and #health at the #YKASummit in #NewDelhi. pic.twitter.com/HvU9VBSPev

The talk moved on to Jasmine George, who talked about abortion laws and their situation in India. She highlighted, that unlike most countries in the world, India has facilities for legal abortion, but they are highly problematic, due to the moral judgements accompanying the treatment.

She explained the poor condition of abortion laws in India through her own example; when she went as a young woman of 25 to get an abortion as a single parent. It was then that she was called “illegally pregnant” which made her realise how people in India are still not able to access abortion facilities.

The problem lies with the treatment of doctors, who judge the girls morally for getting an abortion. She explained how people come prepared for judgement and with loads of money to get an abortion. She showed how abortion is actually an emotional, economic, physical and health issue; something that is very personal and not something to judge. Jasmine talked about the role of religion in the moral judgement because as a Catholic, abortion is a sin. However, she totally disrupts the regressive concept.

Jasmine also highlighted the role of men in such cases. She believes that men undergo a lot of social stigma and prejudices when talking about their sexual problems. They are made to feel less ‘man-like’, making them vulnerable and forcing them to take their rage out, sexually.

She ended her talk by emphasising on proper planning, like usage of contraceptives to make sex safer. To summarise her talk, “Something as beautiful as love, sex, relationships which end up in abortion, which is legal in our country could be handled so well, but youth is busy crowdsourcing fund for abortion and busy figuring out who wouldn’t judge them.”

Also read: How Society Views Women’s Sexuality Through The Lens Of Male Pleasure

Meanwhile, Dr Zoya Rizvi highlighted the work done for accessing healthcare in government hospitals. She said that they are working on making such facilities free. But, the education around sensitivity and communication is still lacking, which should be worked on.

Dr Zoya also highlighted the lack of counsellors and psychiatrists in government hospitals. She said that the number of actually trained counsellors is very less because it is not a very high paying job; it has less increment and has high pressure.

She also focused on the state’s need to prioritise the budget. It is because the budget is more focused on childbirth and infant health, but negligible about adolescent health and youth.

The talk concluded with one major point highlighted by the panellists in their spheres, like immediate awareness sessions for non-binary, sexual and gender awareness by M.Suman, accessible healthcare for disabled and women by Nidhi and an opening up of the maternal fund for abortion, by Jasmine.