By Md Sohel in Latest, Politics

With the passing of the Citizenship Amendment Bill (CAB) in the Rajya Sabha on December 11, the nationwide demonstrations caught international attention. With the formation of the Citizenship (Amendment) Act (CAA), it has only further intensified.

The brutal abuses committed by the Delhi Police on the students of Jamia Millia Islamia somehow gave strong ground support for the disapproval. From official activities, to lawyers and journalists to human rights defends criticized it with the mass. The USCIRF criticized the decision of the Government. Japanese foreign minister and two Bangladeshi ministers have called off their diplomatic visits to India, and many more to count under the ambit of this democratic protest. 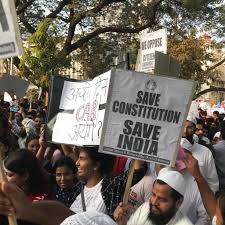 The BJP Government ascertained its ideological strikes by passing this contentious and discriminatory Citizenship (Amendment) Bill, now an Act.

The contents of the Act desecrates the purity of Indian homogeneity, marking again a ‘dark age’. The range of destructive ideological strikes can be viewed as a fraud of a secular spectacle, including the Triple Talaq, Article 370, Ram Mandir-Babri Masjid and now the CAA.

The purpose of this act is to grant citizenship by a religious criterion which draws a parallel between the Reich Citizenship Law of 1935 by the Nazis, and foretells the ensuing result of Spain after the ousting of Muslims.

It also resembled the metaphor of a narrow-minded religiously devout boatman sheltering all people from a flood except Muslims.

The completion of the Indian constitution took much enough time to assess and fathom all sorts of people; their identity, religion, culture and heritage, so that the diversity of Indian can be measured in a strong unity. But, with an unwanted amendment, the power excluded all.

That’s why the bill, presented by the Home Minister Amit Shah, prompted anger from different regions, for different reasons. Muslims have been worked up against the religious basis criterion of citizenship, the Assamese came out with ‘Assam is for Assamese’, Tamil Nadu opposed for a different reason, Jamia Milia students at first, and other universities later, then descended on the field with a dissent of freedom and expression.

Also read: How Can We Reclaim Our Democracy From The Megalomaniacs Who Run The Government?

In this way, all of India, with all sorts of people crossing all barriers of faith, caste, and religion broke out in the movement to “Save Constitution.”

The act is said to deliver minority communities, i.e. non-Muslim of Afghanistan, Pakistan and Bangladesh, the citizenship certificates easily, with a settlement of five years at a welcoming pretence for their salvation from persecution. The NRC exercise in Assam excluded more than 19 lakh people from the register of citizenship. These people peddled door-to-door in a sheer attempt to prove wanted documents dating before 1971.

After they failed in doing that, now, they would have to reestablish the documents of early December 31, 2014, and can be forced migration from the mentioned countries. Meanwhile, Muslims have no alternative. What exhaustion they must feel in proving their citizenship!

After that, when reports said that the minorities, including Muslims and Dalits, in India have been severely tortured, in contrast with the mentioned countries, then the Indian government behaved corresponding to that autocracy. Is that Indian secularism?

When the CAB was passed in Rajya Sabha, the CAA threatened the existence of Muslims in India. They have been sobbing with dead hearts in silence and voicing for their rights in appearance. What can they show for their citizenship to the descendants of ‘loyalists of the English government?’ The graveyard of their ancestors is the ardent proof of their nationality.

It hasn’t been perceived that the claim and intention of some power-holding BJP leaders would come in true actions in this short span with a legal way. Prompting the agenda of ‘Hindu supremacy’, heritage names were corrupted, some historical characters were blamed, and even posts relating to people and culture was occupied by hard Hindutva ideologues.

Film industrial board is an explicitly vivid example. Since 2014, the art films persuaded denigration and defamation of a specific community. ‘Ultra-nationalism’ was manifestly fanned with a directory of violence.  This hurts and damages the essence and sense of secularism. But, the democracy exists still now; the agitation is spearheaded because of that attrition without a nationwide leader. Every land and state of the nation has possessed that democracy and will step ahead relentlessly to preserve it and taste its fruits.

The controversial CAB was passed in an atmosphere of electoral colours. At the moment, oppositions would dig out into the issue and the electoral campaign would be grounded easily. The responsible ruling party can simply sneak more complex issues like economic slowdown, because when the INR had to be devalued, prices of daily commodities like onion touched the sky.

Also read: Despite All Violence, I Believe JNU’s Resolve Will Remain Unshaken

Perceiving this, the Modi and his polity-mate  No fear, the democracy lives still now; hailing from a tribal community, Hemant Soren stood up as outdoer of BJP in the state. The NRC exercise only in Assam cost ₹16 crore without an accurate result. How then the government can’t falter in ‘lie’ of ‘no discussion’ with the lowest GST rate in the past 35 years?

Further, the slogan of Azadi would have sent shivers through their want for their own Rashtra. Indian secularism will live long until the power of democracy prevails. No corruption, no compromise with it can be contented. It’s the people democracy; people will judge, justify and preserve it.