The performance of the bureaucracy matters a lot in any government structure. If bureaucrats are not following their rules to manage the department that they are leading, then government functionality will be affected badly, and it’s happening in Pakistan. The bureaucracy in Pakistan is not as transparent as it should be. 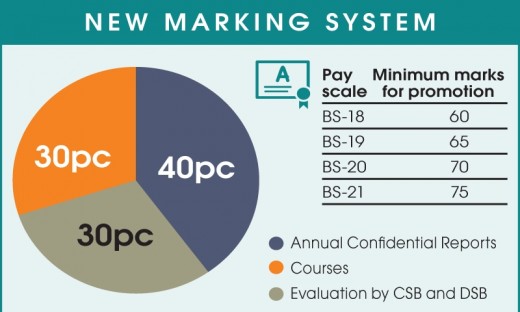 The federal government recently took it on themselves and has asked the Central Selection Board (CSB) for the promotion of bureaucrats on their reputation and performance, rather than seniority.

The board’s discretionary marks have now been increased from 15 to 30, on which even lower-ranked bureaucrats can lead their senior ones on the overall marking for performance.

This rule has gotten the go-ahead from Pakistan’s PM, Imran Khan, and on December 3, 2019, a notification was released regarding the criteria of promotion of civil servants. The criteria for promotion include:

According to the regulation, “the inclusion of 30 arbitrary signatures of CSB members will be more talked about in the official Gazette of Civil Servant Promotion (BPS 18 to BPS 21) Rules 2019.” The vocational courses taken by the bureaucrats will increase by 30, while the remaining 40 have been earmarked for the ACRs.

What Is The Golden Rule?

Prior to this, promotions were easier for public servants, because it relied mostly on the number of courses an individual undertook, and the annual reports made with selection board members. A bureaucrat could be promoted even after getting a zero rating from the CSB. However, under this rule, every public servant will need to get at least 60 to 70% of the numbers in the CSB for promotion.

Describing the impact of the new rule, PM’s Advisor for Establishment Shahzad Arbab highlighted that increasing the arbitrary power of CSB is vital for promoting merit in the system. Arbab noted that the move is not politically motivated and aims to promote capability.

Also read: Transitioning From A Patronage-Based Bureaucracy To A Merit-Based One

“As per my personal experience, the CSB generally makes an objective assessment as it examines each and every officer for promotion. You cannot gauge eligibility of the officers on annual reports as almost every officer gets an outstanding ACR.” He also pointed out that the proposal was submitted by the secretary committee, which includes all the federal secretaries and is headed by the cabinet secretary.

Ankit tiwari in News
July 11, 2020
159
India drafting law to increase nuptial age of girls- the need of the hour