“I Quit Twitter Over Threats To My Family, But I Won’t Stay Silent Anymore”

By Arun Chandra in My Story, Politics

I decided to quit social media arguments. I used to argue and rant since the days Dr Manmohan Singh was the Prime Minister. I have “zero political affiliation”.

I quit Twitter and stop talking on social media a year ago, because of fear; my family and loved ones were personally targetted.

I decided to be vocal again after the Citizen Amendment Act (CAA) was cleared in the Parliament, and a very aggressive police crackdown happened on the students of Jamia Millia University (JMI). It made me question how we can stay silent and neutral during a time like this.

Last year, there was a time when I was planning to apply for immigration abroad, and the fear about whether I would get a No Objection Certificate (NOC) for the visa, was real. Now I don’t fear anymore, it doesn’t matter anymore.

I felt that leaving the country, and staying silent wouldn’t make a difference, because I am just one of the voices, and there are others who are speaking up and fighting. I decided to be silent and anonymous in expressing my opinion. In a way, it was fear that brought me back, too.

As in Dark Knight Rises, Bruce Wayne says, “The mask/anonymity is not to protect himself but the loved ones around him.”

I no longer have any fear. Especially after looking at JNU students, women in Shaheen Bhag, Jamia or other students protesting; who show no fear. I can’t be confined to my protective shell, in my privileged cocoon, because of fear.

I will say it does not matter what the say or do, I will voice what I will feel. I believe in my Constitution, my rights, my liberties, and I will take them and exercise them, when I deem fit. 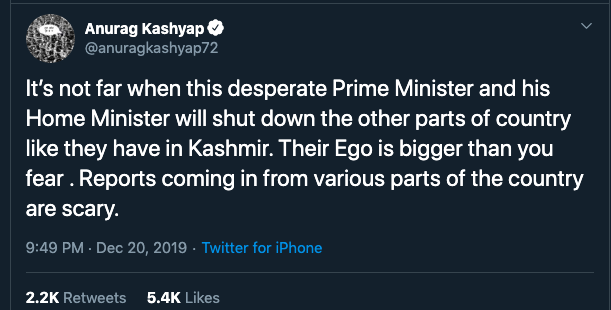 “My Parents Have Told Me Not To Befriend A Muslim”: How I Was Accustomed To Discrimination From An Early Age

I’m 21, With A Masters Degree, And I Don’t Know If A PhD Is Worth The Hype