The Earth’s Kidneys Are At Stake

By sayan basak in #ZeroSeHero, Environment

The recent years have witnessed a major change in the global ecosystem with the infiltration of microplastics pollution. The term Microplastics has a variety of definitions, but the most common of the lot refers to plastic particles having a size of less than 5 mm in diameter. Essentially, the minute size of the particle is a potential threat to the flora and the fauna, thus proving to be a fatal agent that affects the ecosystem.

Experiencing disruption as a function of the biotic and abiotic environments paves the way for the evolution of several functional diversities amongst the biological species. These diversities, in turn, generate the accumulation of and the transmission pathways for the microplastics, from one ecosystem to the other. 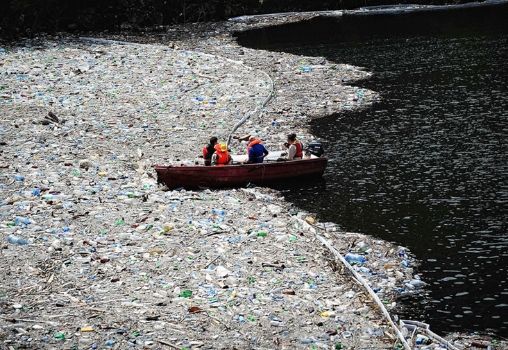 Although the transmission routes are not an independent factor, they are highly interconnected amongst themselves. For instance, the freshwater ecosystem turns out to be one of the most highlighted connected biomes. Rivers, playing the role of the connected ecosystem, transmit 70–80 % of the microplastics to the oceans.

Also read: Wetlands Are Crucial To Sustainable Development But Barely A Part Of The Discourse

Similarly, lakes may be considered as a great source for either a short-term or a long-term sedimentation location of the microplastics. In Europe, and some of the parts of North America, an estimated gross amount of 125–850 tonnes of microplastics per inhabitant is dumped to the soil bio-network as a result of various engineering processes (sewage sludge treatment or during the processing of the biosolids).

At times, climatic conditions (floods are a very good example) may catalyse the process of unevenly distributing the microplastics. Hence, to sum the above assertion, we may assume that the transferring of the microplastics, from one ecosystem to the other, takes place primarily on a multidimensional scale, comprising of several overlapping and interconnected zones.

The wetland biome, which is often referred to as the ‘Kidneys of the Earth,’ turns out to be a distant ecosystem covered up with water, hosting several biological species like marshes, bogs, vernal pools, and seagrass beds.

Zedler and his coworkers reported that these wetlands play a pivotal role in supporting the entire ecosystem by storing of the floodwaters, enhancing the nutrient cycles, and making the agricultural production better.

The unique property of the wetlands aids in the purification of a various number of pollutants. On an additional note, the biogeochemical conditions of these ecosystems prove to be an important factor in the recycling of a wide spectrum of chemical nutrients via the influx and the outflux of the swamp water.

Keeping all these advantages to one side, if the wetland were to somehow get polluted or contaminated by a critical value of the pollutants, the ecosystem mitigates several detrimental effects on its surrounding environments. Hence, wetlands, in the modern era, are considered as the base point to have an overview of the microplastics that leach into the environment.

Also read: The Disappearance Of Natural Wetlands Due To Construction Is Endangering Lives In Patna

Wetlands consist of three possible transmission routes for the microplastics to travel through: (i) By the surface water (ii) The internal water pore in the soil and (iii) Change of the climactic condition. This makes them one of the complex systems we have to study the effect of the microplastics.

An obvious question that arises in the context of the above assertion is what flow principle is followed by these microplastics while it is injected along with the waste disposal in the wetlands?

Moreover, there is an influx of migratory birds and aquatic species which broadens the diversity, thus tuning the ecosystem to have a complex food web. Microplastics are potential threats in systems having a convoluted food web due to the bioaccumulation effect.

Apart from the complexity arising due to the food chains, several interspecific relations also influence the influx of microplastics. A recent study demonstrated that microplastics may get attached to earthworms, potentially entering their digestive tracts.

Wetlands also do possess a characteristic trait of having a higher moisture content, thus making it susceptible to these kinds of microplastics transmission. A team of researchers led by Reynolds and Ryan successfully quantified the microplastics by studying them in the excreta and the feathers (potential transport medium) of the African Duck species.

They found that 5% of the excreta samples and 10% of the feathers were contaminated with microplastics that originated from the South African Wetlands.

According to studies conducted on the Setiu Wetlands (Malaysia), microplastics may also be ingested by filter-feeding bivalves and several species of fishes, proving that microplastics associated with the wetlands may easily be transmitted to animals.

Also read: Not Oceans, But Rivers Are A Hotbed For Most Of The World’s Plastic Waste

Research on microplastics, based on wetlands, are very limited and have to expand immediately by studying not only the microplastics transmission, but, also researching the interaction of the particles with the animal interfaces.

We believe that the study may be constructed by taking into account the seasonal effects. Various tools on data mining and artificial intelligence may be implemented to study a large number of data simultaneously. The samples may be studied using several sampling analysis techniques including Surface-enhanced Raman scattering (SERS) or Fourier Transform infrared spectroscopy (FTIR).

The multidimensional scale should be taken into account to study the transfer of microplastics across the different interfaces, and also to study these transfers onto the food webs, on enlarged spatial conformations.

The last thing which can be addressed is the transmitting of the microplastics via bird migration. To investigate the global transmission pathways of microplastics, studying the migration pattern may be the first step to investigate.

Dedication: This article is dedicated to the Department of Polymer Science and Technology, the University of Calcutta for introducing ‘sustainability’ to me.

This article was first published here.