Iranian General Soleimani Killed In An Airstrike Ordered By Trump

By Saman Javed in GlobeScope, Politics

A US drone strike ordered by President Donald Trump on Baghdad airport has killed a top Iranian commander, Qasem Soleimani.

“At the direction of the President, the US military has taken decisive defensive action to protect US personnel abroad by killing Qasem Soleimani, the head of the Iranian Revolutionary Guard Corps-Quds Force, a US-designated Foreign Terrorist Organisation,” said the White House.

The Pentagon on Thursday confirmed a strike killed Qasem Soleimani, the head of the Islamic Revolutionary Guards Corps (IRGC) Quds Force. The Pentagon also confirmed that the US military killed General Soleimani along with six others at the direction of President Donald Trump.

The Trump administration viewed Soleimani as a ruthless killer, and The Pentagon on Thursday also blamed him for several deaths of Americans and their allies in several attacks in recent months.

The Pentagon has blamed Soleimani and his Quds Force for attacks on coalition bases in Iraq in recent months, including the 27 December strike. He was also blamed for the 31 December US embassy attack in Baghdad. The Pentagon was also reported saying that in addition to the hundreds killed in his time as a commander, over thousands were wounded.

“General Soleimani was actively developing plans to attack American diplomats and service members in Iraq and throughout the region,” said the Pentagon in a statement, and called the airstrike a “decisive defensive to deterring future Iranian attacks.”

The officials said that the strike also killed Abu Mahdi al-Muhandis, the deputy commander of Iran-backed militias, known as the Popular Mobilisation Forces.

After Iran’s top general Qasem Soleimani was killed in an American airstrike, the US Secretary of State Pompeo said that the US is “committed to de-escalation.” He also said the US airstrikes that killed Iranian general Qasem Suleimani “saved American lives.”

Esmail Qaani, who was formerly the deputy commander, has been named the new chief of Iran’s elite Quds force after Soleimani’s death. Iran’s President Hassan Rouhani has earlier said that Iran and the “free nations of the region will take revenge on the United States for the killing.”

Iran’s Supreme Leader Ayatollah Ali Khamenei has warned that a “harsh retaliation is waiting” for the United States after Iranian General Qasem Soleimani was killed on Friday, 3 January, in an airstrike. Khamenei has declared three days of public mourning for Soleimani’s death in Iran, where he was revered as a national hero. 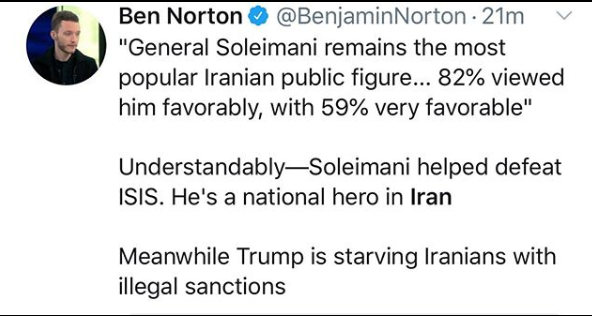 Iran Foreign Minister Javad Zarif called the United States’ strike a “dangerous and foolish escalation” and an “act of international terrorism.” Zarif also said in a tweet, “the US bears responsibility for all consequences of rogue adventurism.”

Also read: Us President Donald Trump Was Impeached In 2019: But What’s Next?

It was a significant move on the part of Trump after he was impeached on 18 December 2019. Clearly, his actions show his desperation and the extent to which President Donald Trump would propagate to win the elections next. Trump’s order to kill the Iran Commander can have an adverse effect on the Middle East and can even lead to war.